The following message of solidarity was delivered on behalf of Peace in Kurdistan:

Solidarity Message to Conference of PYD on 24-25 September 2016

On the occasion of its 8th Conference in Europe, Peace in Kurdistan extends its solidarity and support to the Democratic Union Party (PYD) and the Kurdish people.

As the crisis across Syria and the wider region continues to descend into further tragedy and darkness, we salute the political and military achievements in Rojava, where the success of the people’s defence units in reclaiming territory from ISIS and other groups and the maintenance of stability and the introduction of democracy there serves as an example and model for how the whole country could move towards democracy, federalism and peace.

The implementation of democratic confederalism, based on concepts of ethnic pluralism, gender equality and grassroots participation hitherto unknown in the region, is remarkable in the current fragile environment and is laying the basis for a democratic, egalitarian society that provides hope for the peoples of the entire region who are enduring intolerable oppression. This is an inspiring achievement that we will nurture and support with all our possible endeavours.

We further call on the international community and all forces that support democracy and peace to join in supporting the brave and principled struggle of the men and women of Rojava. 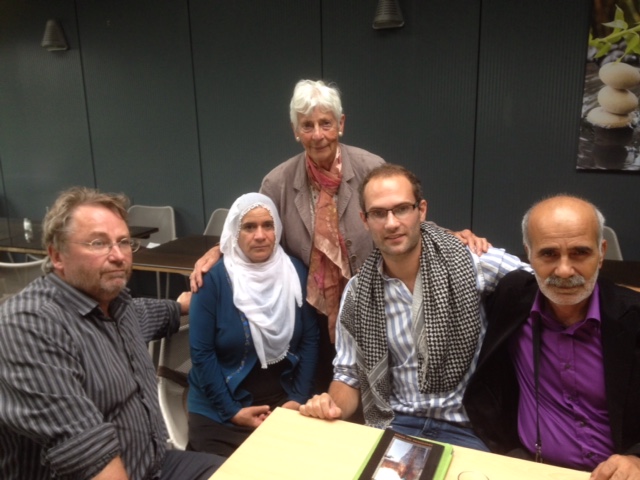 The Conference delegates included Chris Scurfield , father of Costas, killed with YPG last year aged 25, the Cukors, of Diyarbakir, parents of a 15 year old daughter, shot by Turkish army snipers, when inside a house in Sur with friends, and Harry ( Macer) , our UK hero who has done two long stretches with the YPG in Syria, fighting ISIS, seen here with Margaret Owen, Patron of Peace in Kurdistan.