Please find all the latest developments and up to date statements on Democratic Confederalism and Rojava collated below: 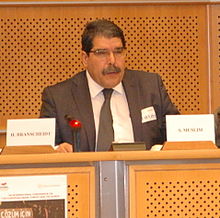 Information on Abdullah Ocalan and some of his writings, including his pamphlets which are available in pdf format, can be found here:
www.peaceinkurdistancampaign.com/resources/abdullah-ocalan
Ocalan has written several books, only some of which have been translated into English:

A review of all three Prison Writings by Felix Padel provides useful insights into the relevance of Ocalan’s work: The Kurdish Quest of Countering Capitalism to build a Democratic Civilisation

Further writings by Ocalan and documents relating to his imprisonment can be found here: www.freedom-for-ocalan.com/english

A campaign for Ocalan’s freedom from Imrali prison has been on going for several years: www.freeocalan.org

Janet Biehl, Bookchin, Ocalan and the Dialectics of Democracy (Paper given at the conference Challenging Capitalist Modernity–Alternative Concepts and the Kurdish Quest, which took place 3–5 February 2012 in Hamburg University.

Alexander Kolokotronis delves into the theoretical underpinnings of Democratic Autonomy, in The No State Solution: Institutionalizing Libertarian Socialism in Kurdistan.

This article by Rafael Taylor published in August 2014, The new PKK: unleashing a social revolution in Kurdistan, is a useful exploration of Ocalan’s ideas and the theory and practice of democratic autonomy in Rojava.

Michael Knapp explains how the cooperative and democratic economic model being developed in Rojava offers possible emancipation from both capitalist and feudal systems of exploitation.

A conference was held in Hamburg in April 2015 called Dissecting Capitalist Modernity, which brought together scholars and activists from across the world to unpack contemporary capitalism and discuss alternatives, like the ones presented by Ocalan and the Kurdish movement. Participants included International Initiative’s Havin Gunesser, scholar Dilar Dirik, Prof. David Graeber, PYD co-chair Asya Abdullah, MP Selma Irnak, Dr Radha D’Souza, and prominent Marxist geographer Prof David Harvey. The conference included sessions on democratic autonomy as well as lessons from around the world, such as Mexico and Venezuela. The papers and videos are available on the dedicated conference website.

On the Kurdish Question in Turkey, the PKK and the Peace Process

The Berghof Foundation recently published a report by Executive Member of the KNK, Adem Uzun, who was himself imprisoned on invented charges, called Living Freedom: The Evolution of the Kurdish Conflict in Turkey and the Efforts to Resolve It.

A joint KNK and CENI – Kurdish Women’s Office for Peace dossier, called Stop the political genocide and femicide against the Kurds in Turkey! Freedom for Abdullah Ocalan!, was published in February 2012 and gives a useful account of Turkey’s AKP government’s continued criminalization of Kurdish activists; the violence of the state against women and the Kurdish women’s movement’s approach to combatting it; cross border military attacks; and the role and significance of Ocalan.

In an interview originally published in ANF in January 2013, KCK Executive Council President Murat Karaylian, speaks about the newest initiative for dialogue between the Kurdish movement and the Turkish government, which was announced in the days before the interview: Karayılan: Dialogue is important but there also needs to be a policy for resolution.

Yvo Fitzherbert writes about the politics of the Kurdish language in Turkey.

Turkey, peace talks and the PKK, Freedom and Justice for the Kurds from Saman Gareeb on Vimeo.

On of the main demands of the Kurdish movement in the peace process is to remove the PKK from Turkish and international terrorism lists. The Delist the PKK campaign has been going on for over a year and our appeal continues to attract signatories. Here you can find articles related to the listing of the PKK.

The Campaign Against Criminalising Communities (CAMPACC), which campaigns to repeal the anti-terror law in the UK, has long advocated the delisting of the PKK. You can read their briefing on how their listing criminalises the Kurdish community in the UK here: The UK ban on the PKK: Persecuting the Kurds.

An interview with Zubeyir Aydar, The role of EU and US in Kurdish-Turkish conflict.

This article by Vicki Sentas, Violence in Britain: how the war on terror criminalises ordinary people, looks at the effects of PKK’s continued listing on the Kurdish community in the UK.

On Rojava and Syria

TEV-DEM (Tevgera Civaka Demokratîk /Movement for a Democratic Society, Rojava/Northern Syria), the umbrella body of the administrations of Rojava, released an important document called The Project of a Democratic Syria, in which they lay out a proposal for the peaceful resolution of conflict Syria and a new political vision for the country as a whole.

A new book was published in March 2015 by Strangers in a Tangled Wilderness , entitled A Small Key Can Open A Large Door: The Rojava Revolution. The introduction to that book has been made available as an online zine and is an ideal one-stop-guide for people who want to know how the revolution in Rojava came about. It is available for download as a pdf.

The Democratic Autonomous Administration of Rojava released a peace proposal for ending the conflict in Syria in May 2014, called Kurdish initiative for a democratic Syria.

The founding document of the Democratic Autonomous Administration of Rojava, Charter of the Social Contract, Rojava Cantons, 29 January 2014.

Norman Paech, Emeritus Professor of Human Rights and former foreign policy spokesman for Die Linke, breaks down Turkey’s hypocritical approach to Syria and it own Kurdish opposition movements in In the Glasshouse.

David Morgan’s articles for Live Encounters, The Mirage of ISIS and The struggle against ISIS in historical perspective are both excellent reviews of regional and global political dynamics following the rise of ISIS in Iraq and Syria.

Dilar Dirik, The ‘other’ Kurds fighting the Islamic State, published in Al Jazeera at the height of the Kobane resistance, asks why the ‘other’ Kurds of Syria (and their counterparts in Turkey) are still labeled as terrorists even while their superiority fighting ISIS became widely acknowledged.

Yvo Fitzherbert excellent reporting from the region shows how Ocalan’s ideas influenced the Rojava revolution and questions Turkey’s disruptive policies towards the Kurds. His later article, published in February 2015, delves into how Turkey’s unquestioning support for the Syrian opposition is effecting the Syrian refugees it is hosting.

Delegations have visited Rojava in recent months to offer solidarity to the struggle, find out more about what is happening and raise awareness of the revolution back in Europe. Janet Biehl took part in one such delegation organised by Civaka Azad and wrote this report on her return, Impressions of Rojava: A report of the Revolution, as well as providing further and more detailed eye-witness accounts of democratic autonomy in action. The whole group also published a collective statement in which they report that genuine democratic structures have been built in Rojava, which they believe can show a new way forward for Syria and the Middle East.

For anyone questioning whether the revolution is Rojava is genuine, David Graeber, anthropologist and political activist who took part in the delegation, answered the question clearly on his return.

Dr. Jeff Miley and Johanna Riha summarise their observations from their visit to Rojava, and they discuss how democratic autonomy transcends state borders, integrate gender emancipation and has involved impressive mobilisation in all sections of society. Dr Miley also gave a talk at the University of Cambridge recently, titled, Can the revolution in Rojava succeed? which you can listen to below:

Peace in Kurdistan Campaign has also organised delegations to the region, and published several of the delegate’s reports once they returned.

Zaher Aarif travelled to North Kurdistan in November 2014 to find out more about the social revolution sweeping the region. He wrote about his visit for Anarkismo, where he describes how Kurdish institutions in the south of Turkey are operating autonomously in order to deal with the refugee crisis and continued attacks on the Kurdish people north and south of the border, just like in Rojava. Zaher notes that the social revolution taking place has come from local organisation of ordinary people on the ground.

Following the announcement on 26 January 2015 that Kobane had been liberated of ISIS troops, Trevor Rayne wrote that the Victory in Kobane was down to the will, determination, organisation and skill of the YPG and YPJ troops, and called for their affiliated organisation, the PKK, to be delisted.

Dilar Dirik explains why Kobane did not fall, and how the vision of the Kurdish movement led the resistance of Kobane to success.

Here is an article by Johannes de Jong in the Stream on the current state of Rojava, April 2016. A New , Free Middle East Is Rising from the Ashes of Syria’s Civil War. Why is Geneva Ignoring Them?

Freelance photojournalist Joey L. spent some time with guerrilla fighters in the PKK and YPG during a visit to Iraqi and Syrian Kurdistan in March 2015. His photos are very moving and in the film he put together, we meet fighters from different units of the PKK and YPG/YPJ. Well worth a watch.

Guerrilla Fighters of Kurdistan from Joey L on Vimeo.

Turkey’s support for ISIS has been well documented by various sources, and a wealth of evidence is available which corroborates claims from Kurdish fighters that ISIS troops are being convoyed across the turkish-Syrian border and been provided munitions and other arms. David Philips, researcher at Columbia University, wrote a research paper in September 2014 at the onset of the ISIS siege on Kobane which details Turkey’s links with ISIS. Rick Sterling also penned a piece which provides useful information on Turkey’s support for war in Syria.

On the Kurdish Women’s Movement

The KJB (Koma Jinên Bilind, translated as the High Women’s Council) is an umbrella organization of Kurdish women’s organisations. Their website features an article, The Kurdistan Women’s Liberation Movement for a Universal Women’s Struggle, which explains the history and expansion of the Kurdish women’s movement.

Abdullah Ocalan’s booklet, Liberating Life: Women’s Revolution is available as a pdf and is an essential read. Here he analyses the centrality of women’s liberation from patriarchy in the struggle for a fully liberated society.

VIDEO: Dilar Dirik, Stateless Democracy: How the Kurdish Women Movement Liberated Democracy from the State (Paper given at the New World Summit in Brussels, 21 October 2014).

Kobane: the struggle of Kurdish women against Islamic State is a useful article published in Open Democracy in October 2014 on the involvement of Kurdish women in the liberation of Rojava and the fight against ISIS.

Margaret Owen reports back following her visit to Rojava in December 2013. Her article, Gender, justice and an emerging nation: My impressions of Rojava, was published in Ceasefire Magazine soon afterwards.

Dilar Dirik’s 29 October article for Al Jazeera, Western fascination with ‘badass’ Kurdish women, goes beyond the western media’s orientalising narrative of Kurdish women fighters in the YPJ to examine the history of women resistance fighters and their place in the PKK.

CENI – Kurdish Women’s Office for Peace, based in Germany, released this Dossier on the Assassination of Three Female Kurdish Politicians in Paris following the assassination of Sakine Cansiz, an icon of the Kurdish struggle for liberation, and two more of her activist colleagues. They were killed in broad daylight in the centre of Paris in early January 2013, just weeks after peace talks between the Turkish government and the PKK were announced.

Roj Women’s Association, based in the UK, published this report in May 2012 which looks at state violence toward women human rights defenders in Turkey: A Woman’s Struggle: Using Gender Lenses to Understand the Plight of Women Human Rights Defenders in Kurdish Regions of Turkey

A list of useful books can be found here at Peace in Kurdistan Campaign’s Useful Reading page.

News direct from the Kurdish press

Compiled by: Peace in Kurdistan Campaign