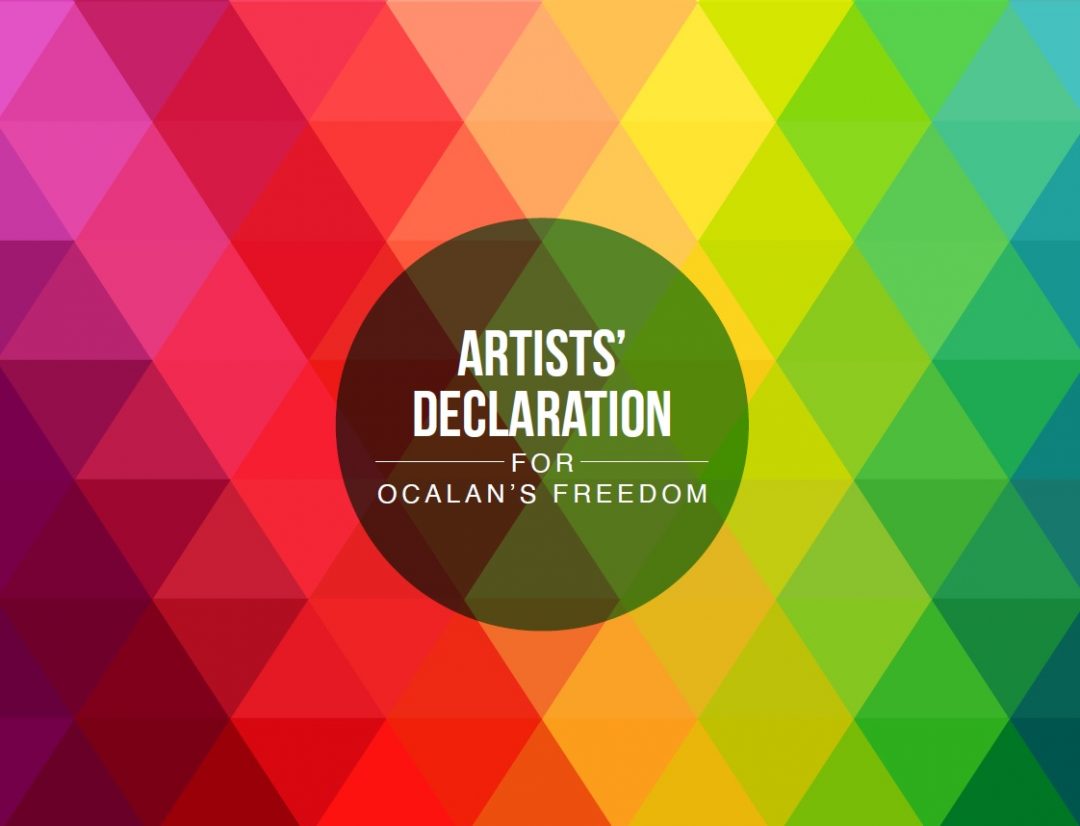 We are pleased to release this declaration signed by over a hundred international artists which is an initiative designed to highlight the contribution of Abdullah Ocalan to the revival of Kurdish cultural expression as part of the modern Kurdish political movement.

Ocalan has always recognised the crucial place of culture in the struggle of the Kurdish people for their freedom and national identity.

This artists’ declaration is released to coincide with the 22nd anniversary of the Kurdish leader’s capture by the notorious international security operation which Kurds still view as a conspiracy and which remains a deeply felt injustice.

After over two decades, it is time that Ocalan was freed from prison and the declaration is aimed at making its own contribution to this cause.

Throughout the centuries, since the earliest times and in every established civilisation across the world, artists, writers and creative workers have placed themselves at the forefront of the struggle for human liberation.

Art is an enhanced form of human expression embodying the power of communication, with a capacity to transmit shared values and represent common experiences that are felt and lived by people in different communities and over successive generations.  Creative artists are essentially engaged in the process of communication whether the tools of their craft are words, sounds or images.

As creative artists we understand the absolute necessity of freedom and what it means for the human spirit. Freedom nurtures life and sustains human creativity. Freedom is a living principle that connects all humanity. It is a basic requirement of our existence, one that is as essential as food, water, shelter and rest.  Like a flower needs the light of the sun, humanity needs freedom. To deny it is to shut out the light and stifle life.

Artistic expression thrives in conditions of freedom. The best examples of art are enjoyed as shared experience and represent the common values of humanity. Art possesses the unique ability to connect people beyond time and space in history and culture; it enables people to transcend borders and surmount all the barriers of language, age, social class, custom and education. Great art challenges its audience to question its own deeply held beliefs and to rethink its most cherished attitudes. It dispels ignorance, prejudice and misunderstanding.

Creative artists recognise that they have a duty to uphold common values. We perform a vital function in our society, guiding popular opinion and acting as the consciences of the nation. There is nothing cynical about the essential truth of art.

As educators and communicators, as artists we carry on our responsibilities with the utmost seriousness with integrity and profoundest commitment. The writers of the Romantic movement regarded themselves as the “unacknowledged legislators” of their nations, in the words of the poet Shelley.

The Kurdish people, like ourselves, are deeply attached to their culture. They are right to be proud of their rich and ancient heritage, language, shared values, folk customs, poetry and traditions of storytelling.

The Kurds share with every nation a desire to express themselves by composing music, performing dance, creating visual art, writing verse, and are active in all the contemporary forms of artistic production including film, theatre and video art. These expressions of their humanity cannot be denied them.

Abdullah Ocalan, the outstanding leader of the Kurdish people, has shown immense dignity, integrity, selfless commitment and profound foresight over the years, even during the decades of his imprisonment. He has inspired multiple generations of Kurdish people to live their lives in dignity and self-respect. He has been a great teacher and encouraged Kurdish men and women to stand tall and stand up for their rights as free human beings.

Throughout their history, the Kurds have been compelled to struggle for their freedom confronted with the intolerance and cruelty of the Turkish state. Ocalan has offered them hope and a means of liberation. The contemporary Kurdish political struggle has engendered a tremendous renaissance in Kurdish culture, numerous examples of which can be found in art, music, literature and cinema.

Abdullah Ocalan himself has written much about the place of culture and language in the lives of the Kurds. He recognises that art is an expression of Kurdish identity and that freedom is a necessary requirement for it to flourish. Art and freedom are both essential for human dignity.

As artists we understand that freedom is essential for the dignity and integrity of every individual. Abdullah Ocalan has served his time and deserves his freedom. He has clearly demonstrated that he is a responsible political leader of his people and has shown that his word can be trusted. It is time for him to be given his freedom.