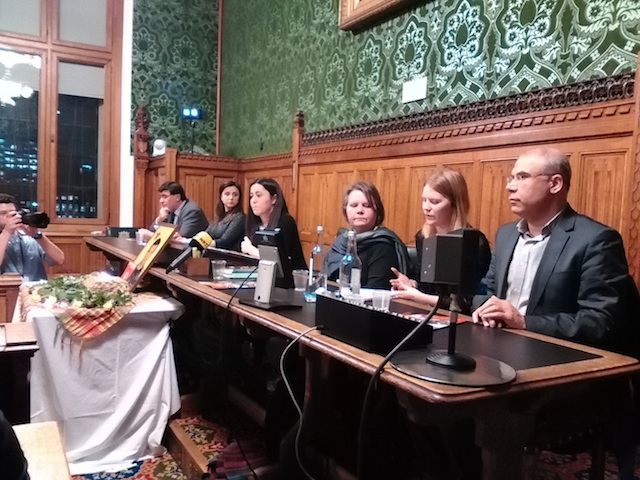 Addressing a packed meeting in the House of Commons, Aysegul Erdogan, chairing, welcomed the speakers, with a special thanks to Vasiliki Scurfield, the mother of Konstandinos Scurfield, the ex-Royal Marine who died fighting with the YPG for the liberation of the Kurdish people. This year, said Aysegul, Newroz “takes on added significance, as this is the first Newroz since the victory of the Kurdish forces, the YPG and YPJ in Kobani, Rojava. This year, the fire of Newroz burns brighter than before. Newroz, for us Kurdish people, has a different meaning. To us, it means light over darkness, freedom over oppression, peace over war.” She praised the Kurdish spirit of resistance in the face genocidal acts against the Kurdish people, such as at Halabja.

MP Mike Gapes, a member of the Parliamentary Foreign Affairs Committee, reviewed the last four years, from the Arab Spring and its failure in Syria, to the rise of ISIS, and the resistance of the Kurdish forces. He told the audience of his visit to Iraqi Kurdistan, where there are currently 150,000 Syrian Kurdish refugees, 75,000 of them in camps. He lamented the lack of solidarity among the international community and the great reluctance of the British government in offering the Kurds practical and material support or, more widely, co-operation in defeating ISIS/Daesh. He called for a co-ordinated international effort, with military support and training, and a serious effort to cut off the ISIS supply lines, both human and financial. He also stressed the importance of putting pressure on Turkey to stop letting jihadis through the border, noting that Turkey is the main transit point for Europeans wishing to join ISIS. He compared foreign fighters volunteering with the Kurds to the International Brigades fighting fascism in Spain, and spoke against the government’s locking up and criminalising of these volunteers.

Dr Alan Semo also spoke of the need for international coordination to help defeat ISIS by paying greater attention to the calls for help by the Syriac and Kurdish forces.

A one-minute silence was held in memory of Konstandinos Scurfield, whose photo was placed on display at the front, surrounded by candles. Campaigner Mark Campbell ended the silence by saying, “In the Kurdish tradition we say ‘our martyrs light the way.’”

Vasiliki Scurfield, the mother of Konstandinos Scurfield, then gave a moving and inspiring speech that ended with a long standing ovation from the audience.

She said that “Kosta was not a mercenary. He wasn’t an out-of-work soldier looking for an adventure or something to do to pass the time. […] He wasn’t paid a wage as a reward for going out to oppose IS; he gave up a wage to do it.” She talked of some of his many heroic acts, including saving the lives of colleagues, and working with the Kurds to help Yezidis trapped on Mount Sinjar.

She spoke of the reasons for her son’s volunteering to fight. “He went out to oppose the so-called IS, of course, but really he went out to support the fundamental rights of every human being.” She recalled that Kosta is not the only person to have died or suffered at the hands of ISIS, naming the other fallen international volunteers, as well as the many unnamed civilians and fighters, and the thousands of women and children being held as slaves.

“Kosta may not have been supporting British political interests with his actions,” she stated, “but he was certainly supporting British values,” adding: “he was taught to value democracy, religious freedom and the rights of women. He watched while the Western world joined wars to promote these values and then he watched while genocide and brutal execution took place, while women were sold into slavery, and those same governments did nothing.” 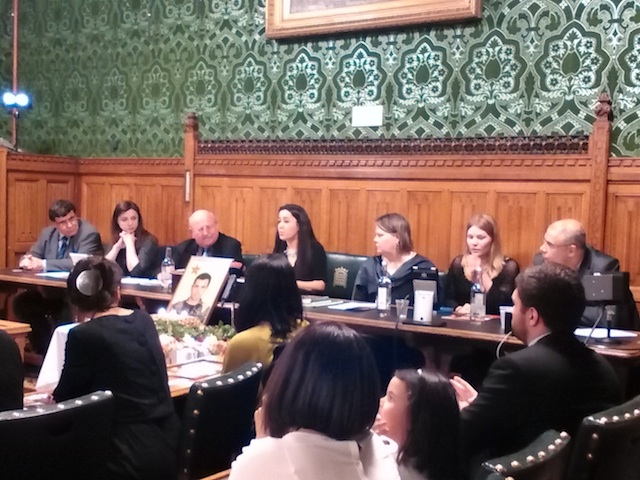 Michelle Allison, KNK UK women’s representative, spoke of the Kurdish women’s movement and how it did not suddenly appear, as portrayed in the Western media, but has been developing over decades. She talked of the YPJ, and how women are a leading force in the society, with 40% gender quotas and the elimination of the patriarchy as a primary goal. She explained how Kurdish men have accepted the new social role of women, realising that it is beneficial to them all.

Dr Mohamed Kanyany, a former KRG MP, began by saying that “This Newroz is different from previous Newroz, as the situation has changed dramatically in the region,” especially with the defeat of ISIS in Kobani. He spoke warmly of Kurdish efforts to safeguard a multi-ethnic society with human values in contrast to the ISIS aim of returning the region to the ‘era of the Stone Age’. He extolled the opportunities being created for women as active and equal participants in the society which could serve as an example to other societies in the region. He also spoke of the need for unity among the different regional Kurdish groups in counteracting the common threat of ISIS and in dealing with the various agendas of governments such as those of Saudi Arabia and Turkey.

In the discussion and questions that followed, there was talk of the importance of the delisting of the PKK in settling the peace process in Turkey.

An audience member asked Vasiliki Scurfield what she had to say to families of those who have gone from Western countries to join ISIS. She said, “It’s a very complex question. I feel really sorry for all those parents. I feel for the parents of those three girls who have gone out. It’s an issue for those communities to try and find solutions. I wish that we could do more to stop people going out to fight. And I can’t help but ask the question: what is happening in our society to make people think it’s OK to commit such acts, but I don’t have any answers, I only have questions. My sympathies to those parents. At least I know that my son died holding values that are widely claimed in the West and across the world, and I think that if I didn’t have that comfort I would be in a very, very difficult situation. I can’t understand what it must be like for them if they are against what their children are doing. How terrible that must be for them.”

Another member of the audience who had been to Iraqi Kurdistan found that in the market every item was from either Iran or Turkey, revealing a total dependency on those countries. Dr Mohamed Kanyany, in reply, commented on the lack of infrastructure and the need for building economic institutions as a way of lessening such dependency.

Estella Schmid, from Peace in Kurdistan, gave a speech at the end referring to support for Rojava from around the world, from Afghanistan and India, to Latin America. She also talked about the system of local councils set up in Turkish Kurdistan which apply Democratic Confederalism directly, despite government power and opposition. She emphasised that the local and international struggle is political and idealist rather than military.

The BBC, Channel 4 and Sky news were all intending to film the event, but a couple of hours before it commenced, the chair, Aysegul Erdogan, received a call prohibiting filming. The reasons for this are not clear, but the enforced lack of a media presence did little to dampen the solidarity and strong feeling that animated the occasion.