This weekend Scottish Solidarity with Kurdistan held a demonstration in central Edinburgh to protest continuing attacks by the Turkish military on Kurdish cities and civilians.

The group delivered a letter to the Turkish Consul, which expresses concern for the women and children killed since last summer and calls for the Turkish government to end the curfews in Kurdish towns. The letter was signed by several other union members, Scottish Green party members and activists.  END_OF_DOCUMENT_TOKEN_TO_BE_REPLACED

Join us for a demonstration outside 10 Downing Street!

“Help build peace with the Kurds, rather than extend the war.”

On Wednesday 23rd September at 4pm, a delegation of women will deliver an open letter signed by a coalition of prominent women’s rights activists to 10 Downing Street. The letter urgently calls on David Cameron to use his influence with the Turkish government to stop the violence being perpetrated against Kurdish civilians in the south east of the country.

END_OF_DOCUMENT_TOKEN_TO_BE_REPLACED 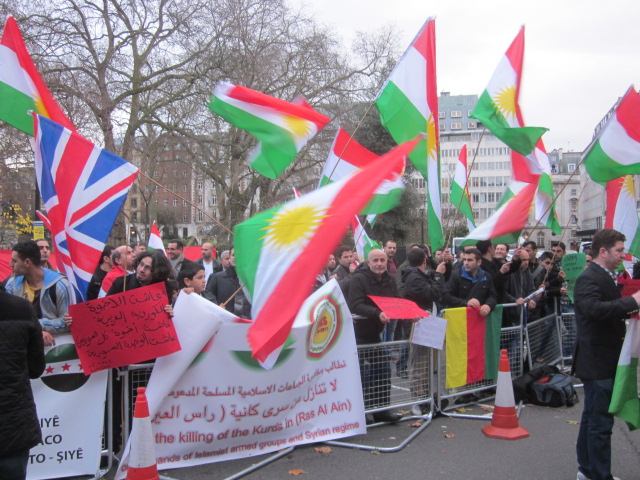 Syrian Kurds demonstrated at Downing Street on Sunday afternoon against the killings and destruction of houses at Ras al-Ain, a Syrian Kurdish town of 55,000 people on the Turkish border.  The eighty demonstrators marched to a rally outside the embassy of Cyprus, which holds the presidency of the European Union. They carried the Kurdish national flag. They want full Kurdish autonomy, and they are opposed to Turkish intervention in Syria. END_OF_DOCUMENT_TOKEN_TO_BE_REPLACED