The Syrian war started with the expulsion of Abdullah Öcalan

His freedom is our freedom

On 9 October 1998 Abdullah Öcalan was expelled from Syria, due to pressure from the Turkish government. As a result of an international plot he was later kidnapped and since 1999 has been in a Turkish prison, held under the most severe conditions of solitary confinement. Nevertheless in 2007 the Turkish state started negotiations with him as the representative of the Kurdish freedom movement. However, since 5 April this year he has been cut out of the negotiating delegation and has been kept completely isolated. This treatment of a significant political prisoner holds an entire society hostage and has a detrimental influence on peace negotiations in the Middle East.

Peace negotiations with the participation of Abdullah Öcalan, as well as his freedom, are directly linked to the freedom of the people in the Middle East. END_OF_DOCUMENT_TOKEN_TO_BE_REPLACED

The Kurdish Women’s Movement in Europe (TJK-E), the International Representation of Kurdish Women Movement (IRKWM), the Office of Kurdish Women for Peace CENI, the Womens Centre UTAMARA, the International Free Women’s Foundation (IFWF), Roj Women, the Hêlîn Foundation as well as the local women’s councils condemn the execution of Kevser Eltruk (Ekin VAN), who was a YJA STAR Kurdish fighter, killed by torture by Turkish soldiers and exposed naked in public in an inhumane manner in the very middle of the town of Varto in Kurdistan, Turkey. The shame and dishonour of this event will go down in history. END_OF_DOCUMENT_TOKEN_TO_BE_REPLACED

One year since the tragic and callous assassination of Sakine Cansiz, Fidan Dogan (Rojbin) and Leyla Saylemez in Rue La Fayette in Paris, we still wait for answers from the French authorities about who is responsible for their murder. 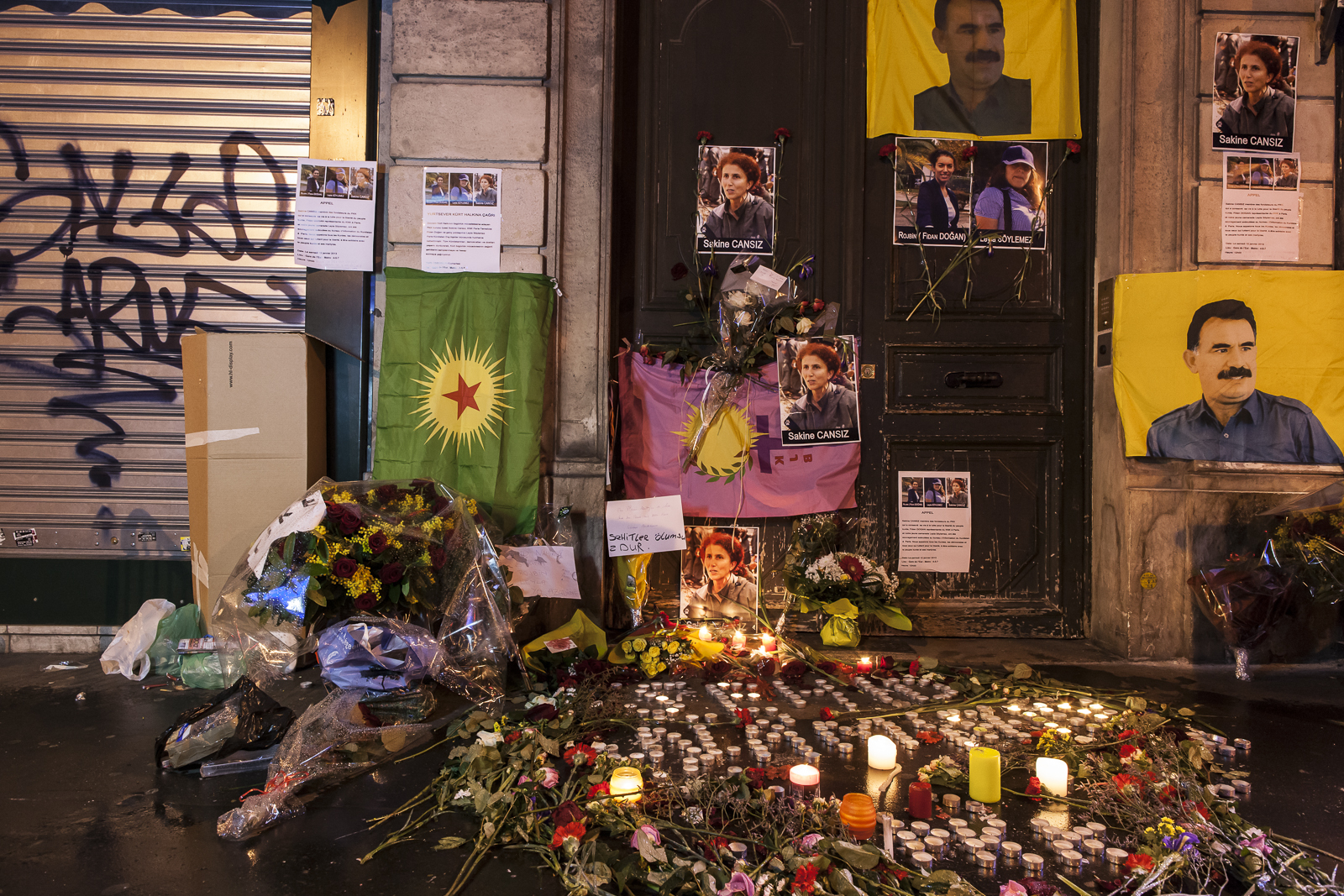 The Ufficio di Informazione del Kurdistan in Italia (UIKI), The International Representation of Kurdish Women and CENI – Women’s Office for Peace have put together a document with the latest information about their campaign for justice for the three courageous women.

The European Peace and Democracy Assembly (ABDEM) has also called for mass participation in the demonstration to be held in Paris this Saturday, 11 January for Sakine, Leyla and Fidan.

END_OF_DOCUMENT_TOKEN_TO_BE_REPLACED

CENI – Kurdish Women’s Office for peace have released this statement on the anniversary of the assassinations in Paris of Sakine, Fidan and Leyla.

Also, the CENI Info news bulletin for June is available in English for the first time, bring you all the latest news from the Kurdish women’s movement in Kurdistan and the diaspora. You can download it here.

We won’t rest until the murders of Sakine, Fidan and Leyla are completely solved:

On 9 January 2013, a terrible crime took place in central Paris. Three female Kurdish politicians and fighters for freedom and women rights, Sakine Cansız, Fidan Doğan and Leyla Şaylemez were gruesomely murdered with shots to the head. The Kurdish people, women and democratic forces around the world, are demanding a prompt and full investigation into the killings.

END_OF_DOCUMENT_TOKEN_TO_BE_REPLACED

CENI Kurdish Women’s Office for Peace have issued this statement and appeal in response to the assassinations of three Kurdish activists in Paris last week. Please see the appeals below!

We demand justice for Sakine, Fidan and Leyla!

On 9 January 2013 an atrocious crime was committed in the center of Paris which has deeply shaken all Kurdish women’s organizations and the Kurdish people, international women’s organizations, women in many different countries as well as friends of the Kurdish people, progressive forces and the democratic public. Three Kurdish women politicians and fighters for freedom and women’s liberation – Sakine Cansız,  Fidan Dogan and Leyla Şaylemez  – were brutally and dastardly murdered.

END_OF_DOCUMENT_TOKEN_TO_BE_REPLACED

CENI – Kurdish Women’s Office for Peace has issued this statement on the ongoing hunger strikes by political prisoners in Turkey, which is reaching a critical stage:

Call for support for Kurdish prisoners on hunger strike: Freedom for Abdullah Ocalan and all political prisoners!

On the 30th anniversary of the military coup in Turkey, a new hunger strike was started by political prisoners in Turkish jails, which has spread day by day and reached a critical level. END_OF_DOCUMENT_TOKEN_TO_BE_REPLACED

Below is a statement by CENI – Kurdish Women’s Office for Peace in support of the demonstrators who took to the streets in Amed on 14 July. A delegation of 12 women from Germany and the UK were visiting the Kurdish regions of Turkey at the time and witnessed the events. You can also read their response to the unrest below.

Protests against the emergency situation in Amed

For the 14th July, The Democratic Society Congress (DTK) and the Peace and Democracy Party (BDP) called for a demonstration in Amed (Diyarbakir), with the demand “Freedom for Abdullah Ocalan”. Although the governor had forbidden the demonstration, the organisers – supported by trade unions, women’s organisations, progressive Turkish organisations, and NGOs – persisted with using the demonstration to signal a solution to the Kurdish question, and to not allow the right of assembly and freedom of expression to be forbidden. END_OF_DOCUMENT_TOKEN_TO_BE_REPLACED

Police severely attacked the people joining the “Freedom for Öcalan” rally in Diyarbakır on 14 July.

TOMA type vehicles, gas bombs and pressure water was used against the mass in the meeting area. Many people, including dozens of children, three Peace and Democracy Party (BDP) deputies and Mayor Osman Baydemir were reported injured in attacks.

Thousands of people who had gathered at five separate points broke the police barricade around the meeting area where clashes were reported to last for long hours. END_OF_DOCUMENT_TOKEN_TO_BE_REPLACED

“More and more women are becoming politically active and so the number of women in prison is rising too.”

First impressions and meetings of the delegation

Since 6th July 2012 a women delegation, with 12 participants from England and Germany in total, has been in North Kurdistan. Amongst the participants are representatives of different women’s rights and human rights organisations, as well as the well-known trade unionist and member of the women’s committee of the Trade Union Congress (TUC), Professor Mary Davis.

The delegation was initiated by the Kurdish Women’s Office for Peace (Ceni) and supported by the Peace in Kurdistan Campaign in London, in order to give the work of the women’s academies a wider publicity; to strengthen the exchanges between women’s projects, women’s rights and human rights initiatives in Kurdistan and Europe, and to learn from each other; as well as to show practical international solidarity in the face of the increased repression by the Turkish state against the women’s movement and trade union movement.
END_OF_DOCUMENT_TOKEN_TO_BE_REPLACED

CENI – Kurdish Women’s Office for Peace are organising the 8th International Zilan Women’s Festival, which will take place in Gelsenkirchen in Germany. This year, the festival will be focused around attacks on the social, cultural and political life of Kurdish women.

“We, at Ceni, Kurdish Women’s Office for Peace, organise the 8th International Zilan Women’s festival, which takes place this year on 16th June 2012 in the amphitheatre in Gelsenkirchen. The International Zilan Women’s Festival is an event at which women living in Europe and those from Kurdistan meet culturally, socially, ideologically, artistically and politically. END_OF_DOCUMENT_TOKEN_TO_BE_REPLACED