Hosted by: Centre for Kurdish Progress 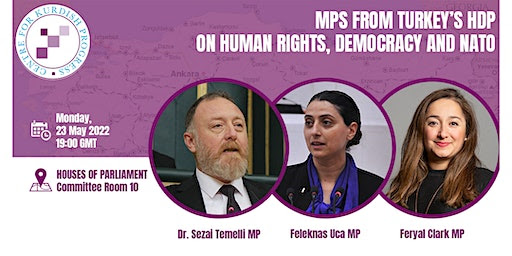 A delegation from Turkey’s pro-rights, pro-democracy opposition People’s Democratic Party (HDP) is visiting London. This Monday 23 May there will be the opportunity to hear from former party co-chair Sezal Temelli and Feleknas Uca, the deputy Co-Chair for Foreign Affairs and the world’s first Yezidi MP in any national legislature.

Mr. Temelli and Ms. Uca will discuss the ongoing crisis over human rights and democracy in Turkey; the 2023 Turkish election and attempts to ban the HDP; and Turkey’s role in contemporary geopolitics and the Russian war on Ukraine, particularly its efforts to prevent Finland and Sweden from joining NATO.

Why does Edoğan want to ban the People’s Democratic Party (HDP)?

The HDP is Turkey’s third-largest political party, and advocates for democracy, minority rights and a peaceful, negotiated resolution to the Kurdish issue.

However, President Erdoğan’s attacks and pressure on the democratic society and opposition, particularly on the HDP, have dramatically increased in recent years amid a deepening economic crisis and runaway inflation driven by fiscal mismanagement.

Thousands of HDP members, including former co-chairs, deputies, executives and mayors, have been arrested since the June 2015 general elections. There are 13 HDP MPs in jail, and many more in exile, while 59 of 65 democratically-elected HDP mayors have been removed from office and over 40% of rank-and-file party members have faced criminal investigation or proceedings.

In addition, there is also now a closure case at the Constitutional Court against the HDP. It is very likely that the government will use the judiciary, which is under its full control, to shut down the HDP before the presidential and parliamentary elections scheduled for June 2023.

Why are the HDP and 2023 Turkish elections so crucial?

If it is not banned, the HDP will have a kingmaker role in the presidential elections and may help the broader opposition to end President Erdoğan’s authoritarian rule. Such a political context has also aggravated the protracted Kurdish issue, undermining the prospects of a peaceful resolution.

Turkey continues to conduct aggressive military campaigns against Kurdish regions in neighbouring Syria and Iraq, using air strikes and ground troops to conduct an ongoing offensive in Iraqi Kurdistan. Regions in Syria occupied by Turkey play host to former ISIS members now part of Turkish-backed militias, as the US Treasury found when sanctioning one such militia. Turkey also conducts regular, deadly drone strikes against both Kurdish regions and the Yezidi homeland of Sinjar, prompting outcry from the religious minority and their representatives.

Why is Turkey trying to block Sweden and Finland from NATO?

All of these events are happening under the shadow of Russia’s war on Ukraine, which is currently reshaping Turkey’s position vis-a-vis the NATO and the European Union. Notably, President Erdoğan this week announced Turkey’s opposition to Sweden and Finland joining NATO, reigniting the debate over Turkey’s suitability as a NATO partner given its appalling rights record and role in destabilising the Middle East.

Join us on 23 May to hear from two politicians who are braving political and judicial repression to advocate for a better future in Turkey, and learn how the UK and the democratic opposition in Turkey can work together to advance our shared values of peace, justice and democracy. The panel will be chaired by Feryal Clark MP.

Feleknas Uca, born September 17, 1976 in Celle (DE), Deputy Co-Chair of HDP, Foreign Affairs Co-spokesperson and Parliamentarian from Batman in the Turkish Parliament and former MEP for Germany; Member of the Parliamentary Assembly of the Council of Europe; Political scientist; she has German and Turkish citizenship and belongs to the Turkish citizenship and belongs to the Yazidi religious minority.

Feryal Clark is a British Labour Party politician who has served as Member of Parliament for Enfield North since 2019.