On 14 August Greek and Turkish warships collided in the Aegean Sea. The Turkish government accused Greece of a ‘provocation’. Greek vessels had been shadowing their Turkish counterparts as they searched for natural gas reserves in territory claimed by Greece and Cyprus. German foreign minister Heiko Maas sounded the alarm: ‘The current situation in the eastern Mediterranean is … playing with fire, and any spark, however small, could lead to a disaster.’ With the US pivot to Asia and its reduced presence in the Middle East, Turkey is testing the limits to its reach as it seeks to become the dominant power in the region. The dispute with Greece over gas is enmeshed with conflicts in Syria, Iraq and Libya, where Turkey is probing; deploying military force to expand its scope.

Turkish President Erdogan and his Justice and Development Party (AKP) have stated their intention to revive the authority of the Ottoman Empire for Turkey. From the 14th century to the First World War, the Ottoman Empire, at various times, possessed much of south eastern Europe, including Greece and Cyprus, North Africa, including Egypt and the Red Sea, and much of the Middle East, including Palestine, part of the Persian Gulf and the Caucasus. 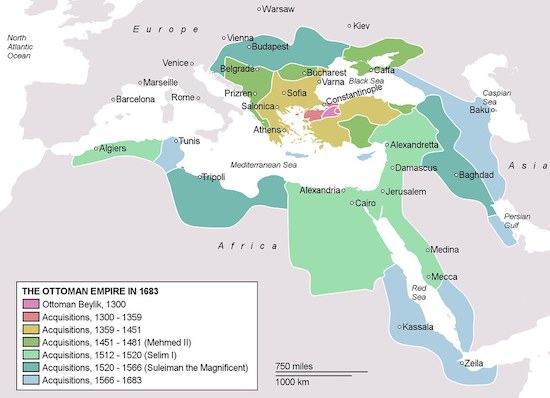 In 2015, Turkey agreed to construct a military base in Qatar on the Persian Gulf. There are over 3,000 Turkish troops at the Tariq Ibn Ziyad base, named after the eighth century Berber whose army conquered what are today Spain and Portugal. In 2017, Turkey opened a military base in Somalia to train the Somali Armed Forces. Like the base in Qatar, Turkey’s presence in the Horn of Africa is a counter to Saudi and United Arab Emirates’ (UAE) regional influence. Historically, the Ottoman Empire challenged the European approach to the Horn and Gulf regions.

In January 2018, Turkish forces attacked and then occupied Afrin, the predominantly Kurdish canton in Rojava, northern Syria. Turkey wants to create a buffer zone from Afrin to Qandil on the Iraqi border with Iran, using its army and mercenaries. Turkish Armed Forces are garrisoned in northern Iraq and Syria. Turkish warplanes daily bomb towns and villages across northern Syria and northern Iraq. On 11 August, two senior Iraqi officers were killed by Turkish drones in the Kurdish autonomous region of Iraq. Turkey has recruited, funded and armed jihadist groups to terrorise the local populations in its war against the Kurds and to extend its reach into these neighbouring countries. On 14 September, the United Nations reported on the atrocities committed by these groups, but Turkey is not challenged and is consequently emboldened in its bellicosity.

When a border dispute between Azerbaijan and Armenia flared up in July, Turkey launched a two-week long military exercise alongside the Azeri armed forces. One of the final atrocities of the Ottoman government was the Armenian Genocide; the mass killing of 1.5 million ethnic Armenians between 1915 and 1923.

Israel found gas reserves off its coast in 2009 and the following year discovered the large Leviathan field. Cyprus discovered gas in 2011, followed by significant finds by Italy’s Eni, France’s Total and the US’s ExxonMobil. The giant Zohr gas field was found off Egypt by Eni in 2015. Most of the major finds have been in waters close to Egypt, Israel and off Cyprus’ southern coast.

Turkey’s borders were agreed at the 1923 Treaty of Lausanne. When President Erdogan visited Athens in 2017, the first visit to Greece by a Turkish head of state in 65 years, he said he wanted the Treaty reviewed. Turkey invaded Cyprus on 20 July 1974, occupying over a third of the island in the name of protecting the Turkish minority population. Only Turkey recognises the Turkish Republic of Northern Cyprus; Greece and the European Union recognise the Republic of Cyprus, which is predominantly Greek by ethnicity. Turkey says it wants the status of Greek islands off its coast changed; the pro-Erdogan newspaper, Yeni Safak, suggested the Turkish military should invade 16 Greek islands – Northern Cyprus being the precedent.

Since 2014 Libya has been divided between forces loyal to the Government of National Accord (GNA) based in Tripoli and the Libyan National Army (LNA) led by Benghazi-based General Haftar. Last year the LNA put Tripoli under siege. In November 2019, the GNA signed two agreements with Turkey. Turkey sent its soldiers and mercenaries drawn from Syria plus arms to support the GNA. This was backed by Qatar. A new sea boundary between Libya and Turkey was also established, stretching from Turkey’s southern coast to Libya’s northeast coast. This angered Greece by threatening plans for a future gas pipeline from Cyprus to mainland Greece via the Greek island of Crete. Turkey claims territorial rights up to the coasts of Crete and Rhodes. Responding, Greece entered into gas exploration agreements with a range of local states, including Egypt. In Libya, Greece, Egypt, France, the UAE, Saudi Arabia and Russia have backed the LNA; the GNA is recognised by the United Nations and backed by Turkey and Qatar. Italy has sought not to take sides in the conflict.

Behind these manoeuvres and alliances is the prospect of supplanting Russia as Europe’s major natural gas supplier. Over half of Europe’s natural gas comes from Russia. Oil and gas account for 60% of Russia’s exports and 30% of its gross domestic product. Libya itself has substantial gas and oil reserves. In January 2020, Israel, Greece, Cyprus, Egypt, the Palestinian Authority, Jordan and Italy signed an agreement to establish the EastMed Gas Forum, intending to lay a pipeline to bring natural gas from the Leviathan Basin to Europe. France asked to join, and the US requested permanent observer status. If successful, this would not only tie Europe closer to Israel, it would boost revenues for Greece and Cyprus, and, most significantly, it would undermine Russia’s economy and strategic importance to Europe.

Turkey was furious at the EastMed deal; it not only excludes Turkey but threatens Russian gas supplies to Europe traversing Turkey. The Turkish ruling class is determined to get a share of the eastern Mediterranean reserves, regardless of rival claims to the waters. In May 2020, Turkey announced it would drill off the Greek islands of Crete, Rhodes and Karpathos and off Cyprus’ southern coast. Turkey refuses to sign the United Nations Convention on the Law of the Sea, which is normally called upon to resolve such disputes as those over the Aegean islands and eastern Mediterranean.

Contending claims are backed by sabre rattling. In 2018, Turkish warships blocked an Eni rig drilling off Cyprus, the first of a series of incidents. Turkey sent a ship, Fatih, named after the Ottoman sultan who led the 1453 conquest of Constantinople, to drill in contested waters, accompanied by Turkish warships. Cyprus issued arrest warrants for a Turkish drilling ship crew. In February 2020, France deployed its Charles de Gaulle aircraft carrier in a show of support for Total and Eni ships confronted by Turkish vessels. The UAE sent four fighter jets to Crete. Israel stages regular training missions in Greek airspace. At the end of August, France said it would join Greece, Cyprus and Italy in joint military exercises in the eastern Mediterranean. Greece said it would buy 18 French Rafale warplanes, four German frigates with helicopters, anti-tank weapons, torpedoes and missiles, and that 15,000 more soldiers would be recruited.

The US has left attempts to subdue tensions between fellow NATO members Greece and Turkey primarily to Germany. Germany and the EU fear that Turkey will send more of its four million Syrian and other refugees to Europe and have been timid in their response to Turkey’s threats. Turkey is Germany’s major arms export market; accounting for over a third of Germany’s arms exports in 2019. Germany supplies Turkey with drone technology; drones are key to Turkey’s war on the Kurds in Syria and Iraq and to its intervention in Libya. Nevertheless, on 16 September European Commission President Ursula van der Leyen said of Turkey, ‘The distance between us appears to be growing …Our member states, Cyprus and Greece, can always count on Europe’s full solidarity on protecting their legitimate sovereignty rights.’ Two days later the Turkish government said it would begin talks with Greece, after a Turkish exploratory vessel returned from waters claimed by Greece and Cyprus. But not before Erdogan had threatened France: ‘Macron, this is not the last problem you will have with me. You don’t know history. Don’t mess with me. Don’t mess with Turkey.’

The drive to war is absurd

To compete over fossil fuels today is absurd and destroys the planet. Turkey and Greece’s militarism is economically and socially unsustainable. Greece’s average income per head has fallen from almost $32,000 in 2008 to $19,600 in 2019. Its GDP fell 15% in the second quarter of 2020 and unemployment rose to 18.3%. Yet over the past four years Greece’s military spending has grown and the government now intends to increase it by a third, or $11.9bn, over the next decade.

Turkey’s neo-Ottoman ambitions have no economic basis to sustain them. This September, the rating agency Moody’s gave Turkey’s debt the lowest grade it has ever given, saying the country was heading for a balance of payments crisis. Erdogan responded, ‘Do what you want to do, your ratings are of no importance.’ Turkish banks and corporations need to roll over $170bn of debt in the next year. That means higher interest charges. This year, the Turkish lira has dropped 20% against the US dollar. As the lira drops so the cost of meeting debt obligations becomes more onerous. Turkey’s central bank spent $65bn failing to effectively support the lira in the first six months of 2020. Tourism, which made Turkey $34.5bn in 2019, is down by three quarters this year due to Covid-19. The country is heading for bankruptcy.

Britain is Turkey’s second largest trade partner after Germany. There are over 2,500 British companies operating in Turkey, including major corporations BAE Systems, BP, Shell, Vodafone, Unilever, HSBC, Aviva and Diageo. British arms companies have had sales of over £1bn to Turkey in the past seven years. Turkey’s foreign minister, Mevlut Cavusoglu, described Britain as a ‘strategic ally’. Maybe so, but the City of London votes with its money. In May 2020, the Turkish state barred three international banks from its currency market as it tried to stop the sale of lira. International finance was not impressed. In the City, Aberdeen Standard Investments said, ‘We think it best not to have a position in Turkey at all.’ The chief economist at Renaissance Capital agreed: ‘I just find it easier to encourage investors to look almost anywhere else.’

With economic woes mounting in Turkey and his AKP losing elections in major cities in 2019, Erdogan seeks to buttress his reputation as a strong leader and defender of the Muslim faith. The July 2020 decision to revoke the status of Hagia Sofia as a museum, which it had been since 1934, and return it to being a mosque, is presented as a return to Ottoman status. With the UAE and Bahrain signing diplomatic agreements with Israel, Erdogan affects leadership of Muslims against the west and Israel. The 18 December 2019 Daily Telegraph ran two pages plus an editorial detailing and condemning Turkish intelligence agents’ collaboration with Hamas of Palestine. Erdogan’s championing of Palestinian rights is intended to bolster his nationalist and religious credentials amidst a gathering crisis.

Iraq used chemical weapons to kill 5,000 Kurds at Halabja on 16 March 1988. The Iraqi army was equipped by Britain, West Germany and the US, among others. Today, Turkey cannot wage wars and threaten neighbours without weapons supplied by other countries. The Bulletin of the Atomic Scientists reports: ‘Conventional wisdom says Turkey won’t go nuclear. That might be wrong.’ It quotes Erdogan, presumably speaking with Israel in mind, ‘some countries have missiles with nuclear warheads, not one or two. But [they tell] us we can’t have them. This, I cannot accept’ (7 July 2020). We have been warned.