END_OF_DOCUMENT_TOKEN_TO_BE_REPLACED

The discussion was moderated by Dr. Thomas Jeffrey Miley and included contributions from members of the UK delegation who observed the elections in the Kurdish regions of Turkey. The delegation consisted of journalists and academics – one of whom was deported and banned from Turkey and another threatened with deportation. END_OF_DOCUMENT_TOKEN_TO_BE_REPLACED

We arrived in Turkey after an urgent call by the HDP to come and monitor the 2019 local elections. Walking through the streets in Turkey, you could be forgiven for thinking that you’d entered a dictatorship. Turkish flags and pictures of president Erdoğan adorn every lamppost. The state attempts to present itself as a democracy – but eyewitness reports from previous elections show that this couldn’t be further from the truth.

END_OF_DOCUMENT_TOKEN_TO_BE_REPLACED

The Canary is an independent media organisation based in the UK. It has been providing a platform to cover a range of Kurdish issues and to highlight the repressive actions of the Turkish state.

The Canary was part of the UK delegation monitoring and reporting on the general election in Turkey in 2018 and the local elections in 2019.

UK editor Emily Apple was part of the both delegations and also went to Amed in March in response to a call for an international women’s forum in support of Leyla Güven and the hunger strikers.

I arrived in Igdir in Eastern Turkey, close to the border with Armenia, at 8am on the morning of Sunday June 23rd 2018, election day. My contact, Murat, met me at the airport and we went for a quick cup of chai before heading out to village communities in the foothills of Mount Ararat with a woman who had been the co-mayor of Igdir until unelected trustees had been appointed by the state instead. I had come to Turkey as an independent election observer at the invitation of HDP, having previously been an Election Observer for the European Parliament’s Democracy Support Unit, participating in official Election Observation Missions in Kenya, Kosovo and Kyrgyzstan in 2017. END_OF_DOCUMENT_TOKEN_TO_BE_REPLACED

END_OF_DOCUMENT_TOKEN_TO_BE_REPLACED 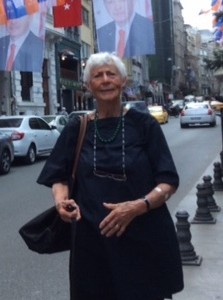 I have returned to Istanbul in order to observe the fifth hearing of the trial of former HDP co-chair: Selahattin Demirtas. Given that Turkey’s presidential election is only two weeks away, we the international observers, anticipate a final verdict.Selahattin Demirtas has been detained since November 2016 in Edirne prison under anti-terror law. He faces numerous charges and is accused of making terrorist propaganda.
END_OF_DOCUMENT_TOKEN_TO_BE_REPLACED

Melanie Gingell, barrister at Doughty Street Chambers, has written the latest in a series of damning reports about the recent snap election in Turkey, which took place amidst a backdrop of serious violence. Here, she details how voter intimidation became a feature of polling day on 1st November:

The re-run election of 1st November was carried out against a backdrop of extreme state violence particularly in the South East of the country. Thousands of HDP and civil society activists had been arrested and hundreds of HDP offices had been attacked in separate incidents across the country. The mood was extremely sombre and there was little evidence of campaigning by any of the political parties. The two suicide bomb attacks in Suruc and Ankara had inflicted a terrible price on HDP supporters and progressive groups. HDP officials in Diyarbakir said that they had been busy organising funerals in the run up to the election, not campaigning.