Comrades, sisters, brothers, hevals – I am happy to be here among friends as we celebrate Newroz.

I am not Kurdish, but as I say every year, paraphrasing the words of my good friend Osman Baydemir, Kurdistan is in my heart.

Last year I was honoured to address the huge celebrations in Qandil, the beating heart of Kurdish resistance. 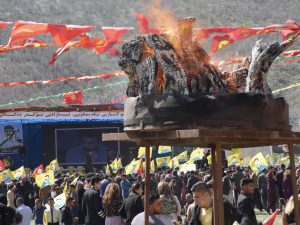 We camped in the mountains fearing that we would come under attack.

The bombs have been falling ever since to global silence as thousands are driven from their homes.

We know the target is not the PKK. It is an imperialist war to crush Kurdish identity and the right of the Kurds to exist.

But Turkey is in a war that it cannot win, because you cannot kill a people’s will to be free.

I pay tribute to the heroic resistance being waged by the guerrilla fighters in the mountains of Avashin, Metina and Zap against the forces of imperialism.

The people of Kurdistan know that they are the barrier that stands between them and a genocide at the hands of Turkish invaders.

And if anyone wants to charge me with glorifying terrorism – as I was threatened with earlier this week – be my guest.

I will face you in any courtroom in this country.

Because we know who the real terrorists are. It is not the PKK in Qandil. It is the United Nations in Geneva, it is Nato in Brussels and it is President Recep Tayyip Erdogan in Ankara.

As a delegation we are clear that he is a war criminal and should be put on trial in The Hague and we issued a call this week for the British government to initiate proceedings.

I am the only westerner to have been in the affected area. I have heard the testimony of scores of villagers that have been affected by chemical weapons.

I have seen the military bases and been shot at by Turkish guns.

Doctors have told me that their expert reports have been seized by government force and changed to cover-up Turkey’s use of chemicals.

This is a tale of collusion, conspiracy and corruption involving world imperialist forces and their proxies.

Nato, the United Nations, Britain the US and the west armed Iraq to the teeth in the 1980s. It remained silent over the use of chemical weapons and 5,000 Kurds were gassed in Halabja.

History is repeating itself as the same forces are arming the modern day Saddam Hussein, Turkey’s Recep Tayyip Erdogan.

Governments start wars. It is the people that stop them. Let’s turn the Newroz fires into flames of resistance.