Let us together highlight the struggles and goals that unite us and move us globally, and that strengthen the common alliance in our diversity.

Speaker from Kurdish Women’s Initiative in the UK

Speaker from Feminist Assembly of Latin American diaspora in the UK

The event will be held Monday, Nov 1, 6pm at Kurdish Community Centre, Harringay.

Hope to see everyone there!

On 1st November 2014, millions of people around the world took to the streets to express their solidarity with the heroic resistance of Kobanê. Millions of women and men, old and young, progressive people of different political colours, united in their diversity, stood resolutely at the side of the people of Rojava (Northern Syria) and testified their support in the fight against the barbarity of the murder gangs of the Islamic State. The world held its breath and watched attentively as the fighters of the Women’s and People’s Protection units, YPJ and YPG, stood in the way of the darkness, and defended humanity house by house, street by street, in Kobanê.

With   the resistance of Kobanê,   which   was to   become   the beginning  of  the   end  of  the   self-proclaimed caliphate, a global movement of solidarity, resistance and common struggle began to grow, which today organises itself across all borders and defends its hope. The revolution of Rojava became the hope and inspiration for people and struggles worldwide, because then as now, there is more defended in Rojava than just the land, the cities and the villages. With the Autonomous Self-Administration, the societies of Northern Syria created a living example of a free and democratic future for the Middle East, beyond local despotism and foreign domination. On the basis of the equal coexistence of all residing population groups, the liberation of women, an ecological and needs-oriented way of life and economy, and an unprecedented form of radical democracy, an alternative system to solve the crisis is flourishing in Northern Syria, amidst the chaos, destruction and suffering of war.

With its radical approaches to solving existing social problems, the revolution of Rojava already shines far beyond the borders of the Middle East. At a time when people all over the world are searching for new solutions and a way out of the abyss into which the capitalist system has steered humanity, the people of North-East Syria are providing very practical answers to the major human questions of our age.

Whether against feminicide and violence against women, to stop the ongoing destruction and unlimited plundering of our natural environment, against state murders and racist police violence, or to stop the global advance of fascism – all over the world, hundreds of thousands, millions of people take to the streets to express their anger and dissatisfaction. At all ends of the world, resistance is stirring against a system that has kept humanity and nature under its yoke for too long. The revolution in Rojava/Northern Syria only acquires its real meaning against this background. Inspite of all adversities and obstacles, during the war and in the times of the Corona pandemic, the people there are building their own alternative day by day and are giving practical proof that another world is possible. A life beyond state oppression and capitalist exploitation, self-governing and free, has already become a living reality step by step. Thus, the Rojava revolution in Northern Syria embodies the hope for a dignified, just and free life in the 21st century. 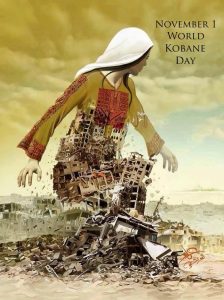