The Kurdish people of Kobane have shown tremendous courage and resilience in their resistance to the ISIS onslaught. The determination of the men and women to fight to defend the territory where they have established democratic self-rule has inspired people across the world. 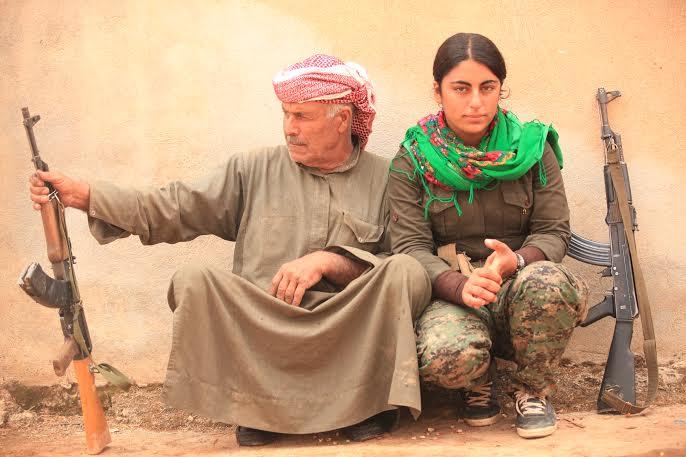 In stark contrast, Turkey has been exposed for its duplicity and total unreliability as an ally in the coalition against the ISIS threat. Turkey’s leaders from President Erdogan downwards have preferred to bomb Kurdish camps, as they did on 14 October, rather than take swift and effective action against the murderous jihadists.

Turkey deployed 25 tanks near Mursitpinar near Kobane on 6 October but no attempts have been made to intervene to save the strategically important city. Turkey has preferred to bargain with its allies to obtain support for the plan to establish a buffer zone in the Kurdish region of Syria and to force the US-led Coalition to launch an attack on Damascus, rather than to confront ISIS directly. We are supposed to believe that the ‘’buffer zone” is designed to protect the civilians as a safe haven, but in reality the Kurds had secured their own safe haven for themselves in Rojava, of which Kobane is a part. Rojava needs to be recognised as a democratic entity rather than support any attempt by Turkey to set up a buffer zone. How can Turkey be trusted following its at best lukewarm approach to confronting ISIS?

The Turks have not only stood by as passive onlookers on the border while the city of Kobane has been besieged, they have consciously exacerbated the crisis in order to weaken the Kurdish resistance. Turkish leaders have resorted to making increasingly wild and unsubstantiated allegations about Kobane and the motives of the Kurds.

Turkish troops have contributed towards the suffering of the civilian population of Kobane by obstructing volunteers seeking to help defend the city.

They have closed the border to supplies and blocked Kurds from Turkey trying cross to Kobane in an attempt to bolster the resistance. People throughout the world have watched on utterly aghast at Turkey’s shocking actions and they have drawn their own conclusions. Many now see Turkey as acting in collusion with ISIS and share the outrage of the Kurds that this is a shameful and unforgivable act.

President Erdogan’s repeated assertions that the PKK is as much of a threat as ISIS, if not greater, are simply baffling and utterly unsubstantiated by the facts. But this seemingly perverse attitude does expose the deep seated animosities against Kurds held by large sections of the Turkish public and it has become clear that this extends right into the heart of government. Ankara perceives its strategic interests to be at risk from any success achieved by the Kurds in Syria because it will inspire the Kurds inside Turkey to demand similar rights. The self-rule experiment in the three Rojava cantons of Northern Syria must have filled Turkish policy makers with utter dismay and it seems that they have viewed the appearance of ISIS as an opportunity to destabilise Rojava if not to overturn it altogether. The intransigence displayed over Kobane is a clear demonstration of such a malicious intent.

The Kobane resistance and the associations, real or imagined, between Turkey and ISIS that have come to the forefront of the world’s attention over recent weeks have radically transformed political perceptions. This has been a transformative moment in global politics. Many more people have now become all too aware of the ruthless calculations that determine Turkey’s politics. Its preference of ISIS over the Kurds poses a challenge for even Turkey’s staunchest defenders to support with any semblance of convincing arguments.

The Kurds, by contrast, have earned enormous respect for their fortitude and determination in putting up a resistance against ISIS for so long and so successfully given the huge odds stacked against them. ISIS is a formidable force; it is well funded, well-armed and can count on some powerful supporters.

The remarkable support shown by Kurds in the UK and throughout Europe for Kobane has had an enormous impact on changing public opinion. A momentum of support for the Kurds has been building up with more and more people convinced by their impressive stand against ISIS which is seen as an enemy of humanity.

The conflict between the Kurds and the Turkish state is at the root of the attitude of Turkey towards ISIS in the current crisis over Kobane. A credible resolution to this conflict must entail decriminalising the only party that truly represents the Kurds in Turkey and which is affiliated with the Kurdish resistance in Syria, namely the PKK. Erdogan’s attempt to characterise the PKK as another ISIS simply lacks all credibility and should not be given credence by members of the Coalition formed to fight ISIS, many of whom are Turkey’s fellow NATO members.

There will ultimately remain no alternative to the peace process between Turkey and the Kurds despite the hostility shown by Erdogan towards Kurdish interests in Rojava. Much more effective pressure must be brought to bear on Turkey to restart the peace process and take concrete steps to negotiate a political solution to the conflict which should include the delisting of the PKK and the release of Abdullah Ocalan.

The Kurds have earned their entitlement to be treated as equals in any negotiated peace. That’s the central lesson that needs to be drawn from the siege of Kobane and the inspirational Kurdish resistance to the tyranny of ISIS.