A delegation of independent election observers from Britain, supported by Peace in Kurdistan Campaign monitored the proceedings of June 2015’s vital general election in Turkey, the outcome of which looks set to determine the country’s future direction for a generation.

The delegation were lucky to witness a historic victory by the HDP  – the first time in the history of modern Turkey that a pro-Kurdish party has officially won seats in the National Assembly. Smashing through the 10% threshold, which has been condemned by human rights organisations and the European Union for deliberately keeping Kurdish parties out of the political arena, the party eventually won 13.1% and 80 MPs took seats in the Assembly. As you can imagine the celebrations across Turkey’s southeast, Bakur, went on for several days.

The delegation produced a report, called Witnessing the Turkey elections, with their eye-witness observations over the election period and the implications of the HDP’s success. It is available to download here. The delegates also spoke at a meeting in Parliament, hosted by Kate Osamor MP, which you can read a report about here.

Jeff Miley wrote this statement on behalf of the delegation:

The recent election in Turkey marked a historic turning point for the country. As members of a delegation from Britain of lawyers, academics, human rights advocates and journalists, we had the opportunity to witness this vital election in the cities of Diyarbakir and Gaziantep. During our five-day trip to these cities, we spoke with Human Rights activists, representatives of trade unions, and met with and accompanied activists and candidates of the HDP in visits to hundreds of polling stations on election day.

Political tensions ran high across the Republic during the campaign, in the run-up to an election that was interpreted by many as a referendum on President Recep Tayyip Erdogan’s ambitions to further tighten his grip on power by introducing a new constitution to convert the Parliamentary Republic into a Presidential regime. The stalling economy, and rising unemployment, certainly did not help Erdogan. Even more damage was done to the President and his ruling AKP by the influx of Syrian refugees, not to mention the role played by the Erdogan government in destabilizing the neighboring Syrian state.

Perhaps even more important than all of these highly salient issues, the election constituted a critical juncture for the fate (1) of Abdullah Ocalan, (2) of the long-stalled peace process with the PKK, and (3) of the prospects for political compromise on the main grievances articulated by the Kurdish movement.

The Kurdish movement in Turkey has evolved dramatically since the arrest of its leader, Abdullah Ocalan, in 1998. Spurred on by Ocalan himself, the movement has officially renounced its commitment to an independent Greater Kurdish nation-state, and has come to embrace a program of “democratic confederalism” in its place. It has at the same time come to express a clear and firm commitment to a peace process, despite substantial and ongoing violent provocations by the Turkish state.

The leadership of the Kurdish movement had a lot riding on this election. In past elections, they had opted to run candidates as independents in particular districts only in Kurdish strongholds in order to avoid having to cross Turkey’s extremely high 10% threshold for representation (established by the military after the 1980 coup). However, this time around, they decided to run the risk, hoping to pass the threshold and presenting candidates as a party throughout all of Turkey, by joining forces in coalition with the Turkish left as well as with other marginalized groups and ethnic minorities including Alawites, Alevis, Armenians, Arabs, Assyrians as well as the lesbian and gay community, feminists, and labour and environmental movements, all under the umbrella organization of the HDP.

The heroic defense of Kobane in the Kurdish region of Syria did much to boost the image and morale of the Kurdish movement, especially in and around the Kurdish capital, Diyarbakir, but also to a certain degree even throughout the rest of Turkey. Simultaneously, Erdogan’s open hostility to the plight of the Kurds in neighboring Syria has done much to sour his popularity among devout Kurds, who had previously sympathized with him as a fellow Muslim.

The corresponding surge in popular support for the HDP has been responded to with intimidation and violence on the part of the Turkish state and the AKP government. The prospects that HDP representation in the Turkish Parliament would block Erdogan’s ambition to introduce a new presidentialist constitution helped fan the flames of this animosity, resulting in a climate quite unpropitious for freedom of expression as well as widespread concerns about the possibility of electoral fraud.

Throughout the campaign, HDP election offices, bureaus, and activists were the targets of harassment, intimidation and violence on over 170 occasions. Indeed, during our brief stay in the country, we witnessed murderous provocation up close in Diyarbakir twice: first, at the HDP’s final election rally on Friday, where bomb explosions killed 3 and wounded over a hundred; and second, two days after the election, when 3 HDP supporters were gunned down at a coffee house that had been used as an election bureau during the campaign. 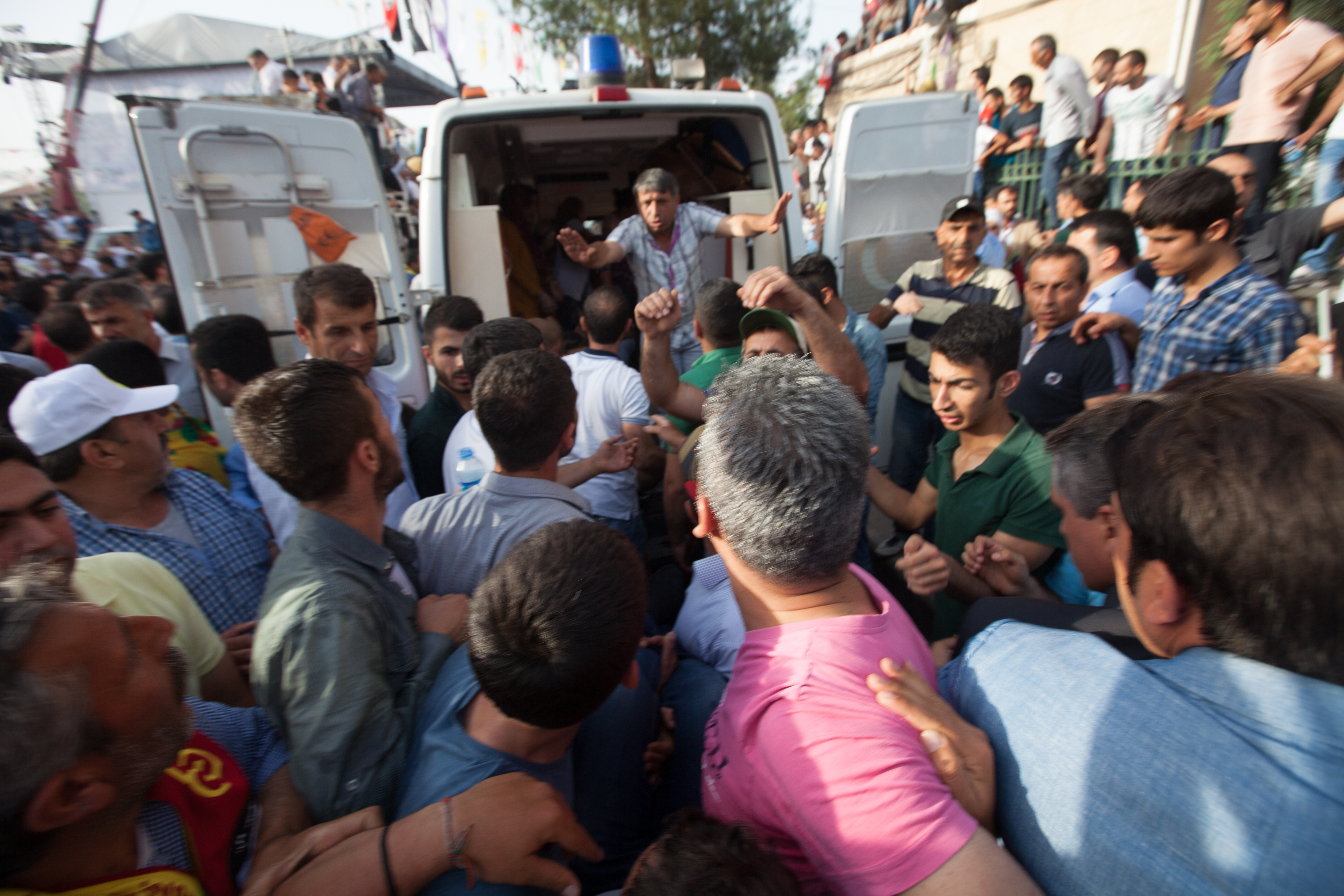 Despite the climate of intimidation and violence, the Human Rights’ activists, trade union representatives, and HDP members with whom we met over the course of our stay displayed consistent courage and restraint, while repeatedly expressing their commitment to both a peaceful resolution to the Kurdish question as well as to a deepening and strengthening of democracy throughout Turkey, even in the face of murderous provocations.

Fortunately, we witnessed no serious incidents on election day, though in many districts of the mixed city of Gaziantep a climate of tension and hostility was palpable even to the outsider. As Osman Demirci, one of the HDP candidates whom some of our members accompanied on visits to polling stations, remarked: “People here are like bombs ready to go off. You have to know how to defuse them.” Our delegation itself was received with a good dose of suspicion, especially among pro-government and Turkish nationalist stalwarts involved in running the election, one of whom angrily commented to Demirci upon witnessing our members enter a room where citizens were voting: “How dare you bring foreigners with you to come and audit me in my own country.” To which Demirci responded smoothly by offering his hand and saying: “We wouldn’t ask for them to be here if we weren’t rightly concerned about the possibility of electoral fraud. But this is a festival of democracy, and they have only come to witness it. Let us stand here together to show the world that we know how to govern ourselves, that we all can get along.”

In the end, the HDP scored a great victory in the election, surpassing the 10% threshold by a wide margin, winning more than 12% of the vote and 80 delegates in the 550-seat Turkish parliament. The result was received with elation – though tensions still ran high in its wake. The atmosphere in Diyarbakir the day after the election – where close to 80% of the electorate had come out in support for the HDP – was festive, to say the least. Yet much tension remained, and was clearly on display even at the official post-election celebration, attended by tens of thousands, and held at the same venue where the annual Newroz celebration has taken place ever since its legalization in 2000. Attendees at the post-election celebration had to pass through fully three security checks – one controlled by the police, two by the HDP – in order to access the venue. Amid all the singing and the dancing, barely suppressed by all the elation, more than a hint of nervousness could still be detected, and surfaced for example when a sudden loud boom among the crowd probably caused by a drum was confused for a bomb, causing many to jump.

The murder of 3 HDP members the very next morning only confirmed that the election result does not mean a miraculous end to the continuing climate of intimidation and violence. Erdogan has been stymied for now in his ambition to increase his grasp on power, but the AKP remains the number one party in Turkey, with over 40% of the vote. Perhaps even more disturbingly, the country’s third most-voted party was the far-right Turkish-nationalist MHP, which managed to capture close to 17% of the vote. What’s more, it remains unclear whether the AKP will be able to form a stable governing coalition, and so there is talk of new elections in as soon as three months’ time.

Nevertheless, the election result on June 7th was a great victory for democracy in the country. The representation of the HDP in the Turkish Parliament significantly strengthens the prospect of achieving a peaceful solution to the Kurdish question, at the same time that it constitutes an important step in the reconstruction of a united Turkish left.

John Hunt, freelance journalist, wrote this article about the HDP’s potential success the day before the election.

Freeelance photographer, Sean Hawkey, has also published his photos of the delegation on his own site.

The campaign has primarily pitted the authoritarian politics of Erdogan’s AKP against the challenge from the HDP which offers peace and democratisation.

The HDP, advocating a peaceful settlement to the Kurdish problem as well as greater democracy, openness and inclusiveness, has been picking up support well beyond its core Kurdish constituency. The party needs to do this to surpass the hurdle of the 10 per cent election threshold absolutely essential to guarantee it any seats in the new parliament.

Posing a strong challenge to the AKP’s long dominance of Turkish politics, the HDP has been subjected to strident hostility from the pro-government media and faced serious physical attacks on several of its party offices, which has left several party officials seriously injured and exacerbated social tensions ahead of Sunday’s poll.

The British delegation, which consists of lawyers, academics, human rights advocates and journalists, will be based in the city of Gaziantep and is responding to an invitation from the HDP to help ensure fair voting. The delegation will be in Turkey from 4-9th June.

It is anticipated that the presence of foreign observers will deter the more blatant abuses and irregularities in what is expected to be a close poll where every vote counts.

It is essential that the HDP gains political representation to act as a counterweight to the country’s authoritarian drift under President Erdogan and the AKP. In particular, the outcome is going to be vital for the future complexion of Turkish society and the peace process with the Kurds.

Dr. Thomas Jeff Miley, lecturer in Political Science in Cambridge University and member of the delegation, says the HDP stand a good chance of passing the 10% threshold, adding, “Such an outcome would significantly strengthen the prospect of achieving a peaceful and democratic solution to the Kurdish question.  At the same time, the coordination and alliance between Kurdish and Turkish left-wing forces distinguishes the HDP, and means that its representation in Parliament would be a highly positive development from the perspective of the territorial integrity of the Turkish state as well.”

Sean Hawkey, delegation member representing the Green Party, also agrees HDP success could have a major impact on the Turkey’s policies towards the Kurds, including in Syria, saying, “If the threshold can be passed, the Kurds will achieve political representation that will help the Turkish/Kurdish peace process and influence Turkish policies towards Kurds in Syria. The future of the Kurdish people and their fight against ISIS will be impacted by the result of this critical election. The Turkish Greens are part of the HDP, and the Green Party of England and Wales – that supports HDP’s firm positions on democracy, ecology and equality – is monitoring the process closely.”