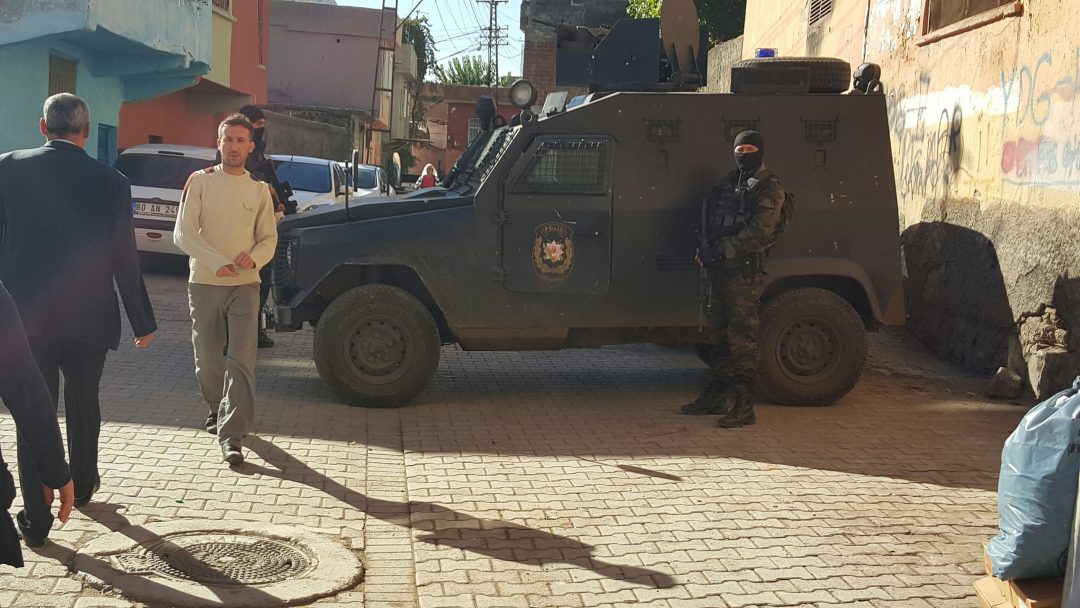 On 1 November 2015 Turkey’s snap election saw the AKP re-gain their majority in the National Assembly following an intense few months of state-sponsored violence and pre-election media crackdowns. With concerns over police intimidation and election fraud, the HDP called for independent observers to witness the election take place. Hundreds of volunteers from across Europe took part and Peace in Kurdistan Campaign helped to facilitate three groups from the UK, who travelled to some of the areas worst effected by the violence.

A raft of reports are surfacing that question the possibility of any kind of free election given the atmosphere in which they were held, including from the European Council and the OSCE. Independent observation of polling on the day, however, more intimately reveals what voting was really like in Kurdish cities and towns – as well as the reaction to the final results.

The results, that came in on Sunday night took many of us, the international observers of the election,  by surprise. Last night we wept, as the first fireworks, music and song,  of what everyone thought would introduce a night of celebration, turned into dark hours of grief and anger, which ended when the armed police arrived with their tear gas and water cannon, stone throwing from the youth, arrests and more violence.

The rest of Margaret’s report lists several concerns about the fairness and transparency of the election. Read the rest of the report here.

A second group, including Prof. David Graeber, academic Rebecca Coles, postgraduate student Elif Sarican and Islington Councillor Aysegul Erdogan, travelled to Silvan on the day of the vote. Their report also raises serious questions about the heavy military presence at polling stations and the restrictions on HDP campaigning that would have had major impact on the outcome of the election:

“According to these accounts, the bias of official institutions in favor of the ruling party was explicit on every level. For instance, in
the June elections, the AKP granted itself $330 million for campaign expenses, and all other parties received such funds, except for the HDP, which received nothing. Even the MHP, which had in fact received a smaller share of the vote, was granted $100 million. All institutions were said to show a systematic bias against villages or neighborhoods known to be HDP strongholds: we were even told that municipal authorities would not collect the trash in such areas. One frequently mentioned problem was that the structure of government allowed for Ministerial Offices to override almost any decision made on lower levels, or for that matter, even constitutional principles (such as those banning any military presence in polling places) more or less at will – as a result, even when the HDP received 95% of the vote in certain districts, and all locally elected officials were HDP, ministerial representatives could simply overrule all local decisions rendering such elections effectively meaningless.” (The report can be read in full here.)

John Hunt, journalist and editor for Kurdistan Tribune, published a piece in Pasewan criticising the ‘blood-stained election’. His final conclusions are powerful:

Bloodied but unbowed, the HDP emerges with a daunting responsibility to lead the resistance to one-man rule, while promoting its “civil, democratic and libertarian”alternative. Across the country millions dread an Erdogan dictatorship and the HDP can continue to inspire them with its vision of a Turkey for all its peoples. In the south-east, the Kurdish movement will defend itself while seeking to develop Rojava-style structures of ‘democratic autonomy’ circumventing the authority of the state.

Following a grisly contest that consumed perhaps a thousand civilian, guerrilla and military lives, Ergogan can sit comfortably in his vast palace, enemies vanquished, corruption scandals evaded, basking in the glow of Putinesque success. But he may yet face blowback — from the ISIS monster he has fostered, the deteriorating economy and, more hopefully, the resilient Kurdish movement and its allies. (Read the rest of his article here.)

Melanie Gingell, who accompanied the delegation, also wrote this report.

The Kurdish Solidarity Network took part in a third UK delegation, which travelled to Siirt. Their report lists several incidences of police and military intimidation as they travelled to different polling stations. The strength of the military presence is plain to see:

The police we saw in the Baykan areas were almost all armed with handguns, and some carried automatic rifles. At the first school we were denied entry to, two automatic rifles with grenade launchers attached were propped up against a wall behind four police sat at the school’s main entrance. The village guards we saw – in both the Baykan and Kurtalan areas – generally carried Kalashnikov rifles, and the soldiers in the same areas carried Heckler & Koch G3s. In front of one school in the Kurtalan area – Kayabağlar Çok Programlı Anadolu Lisesi – a light machine gun stood on the ground with a British-Canadian Arwen 37 grenade and tear gas launcher behind it, and four soldiers carrying G3s sat to the side.

The rest of the report can be read on the Kurdistan Solidarity Network blog.

The full report with all delegates’ contributions can be downloaded here: HDP election reports UK Nov 2015