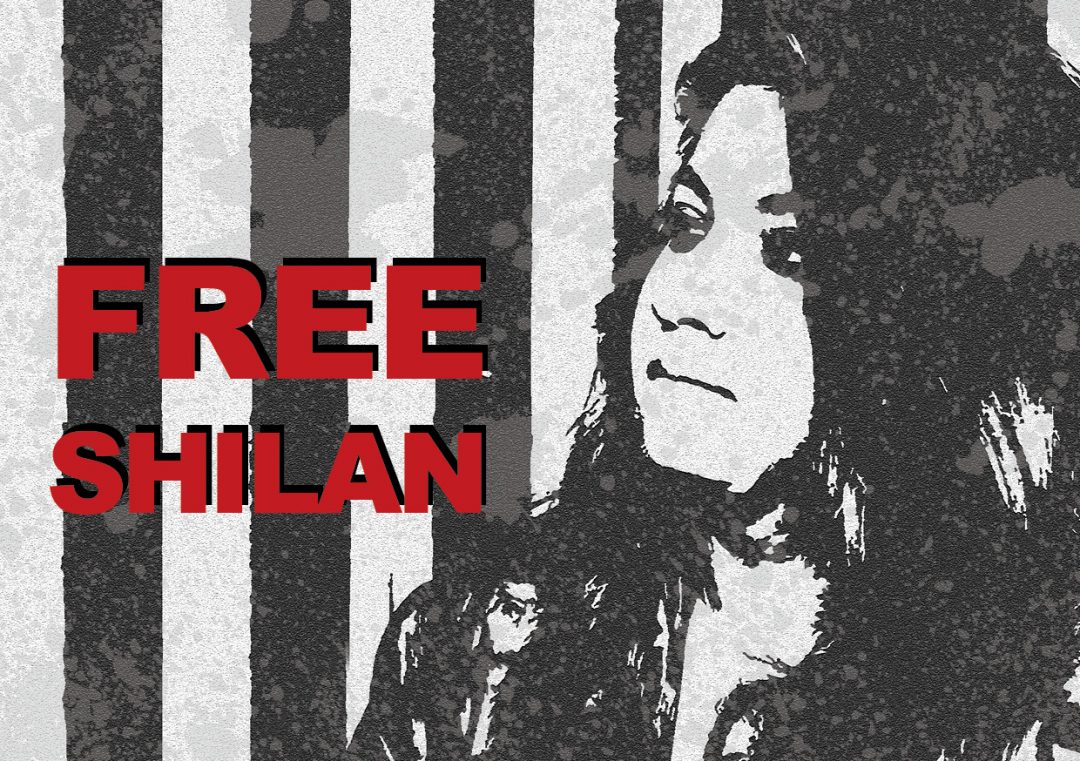 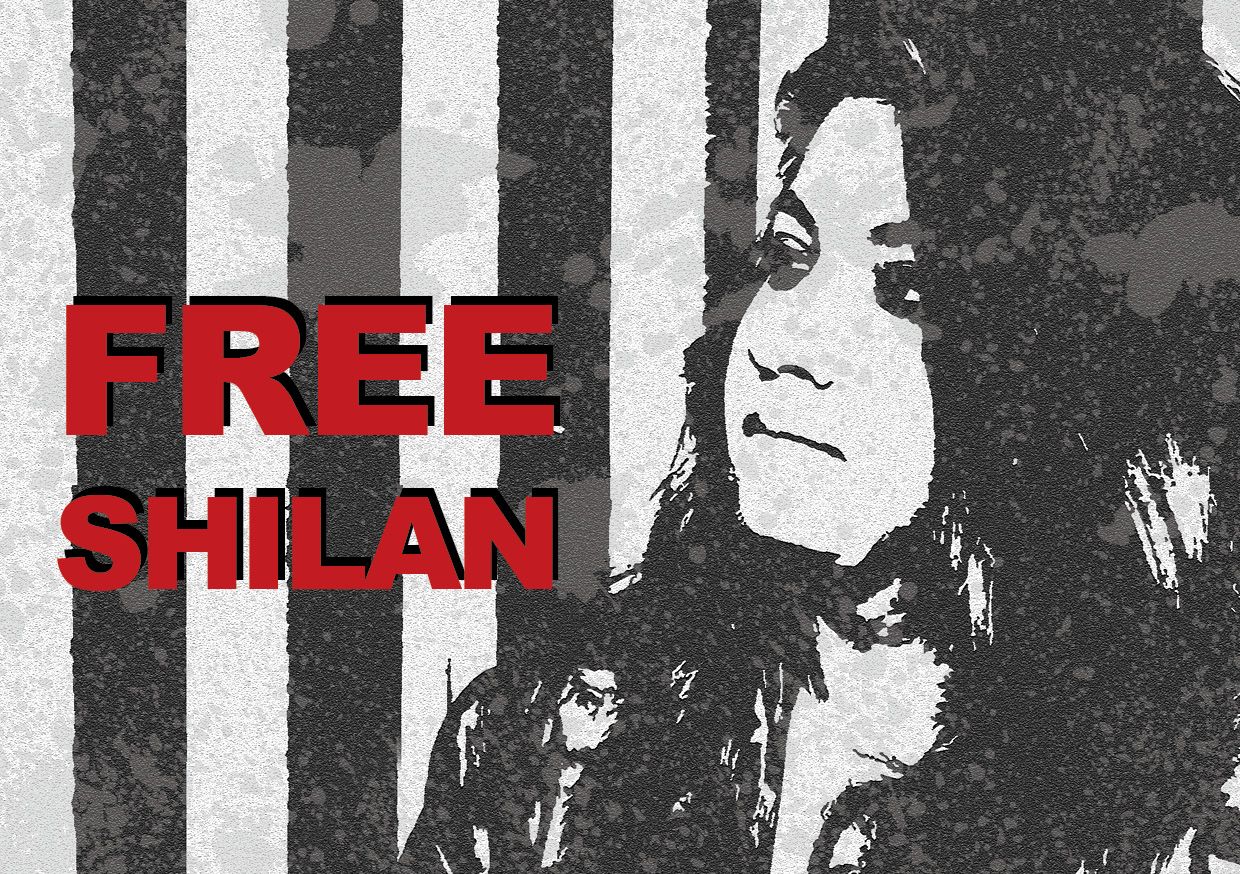 UPDATE
Shilan was released from prison on 25th January and her lawyers are pursuing an appeal against both her conviction and sentence. We will update you with any news as soon as we hear. We send Shilan our very best wishes.

Join our postcard campaign for Shilan Ozcelik, who was arrested and charged with supporting terrorism after attempting to join the PKK affiliated Kurdish forces in Rojava in their fight against ISIS. We need to pressure the Home Office to drop the charges against Shilan and expose the blatant hypocrisy of the UK government, which claims it supports a peaceful resolution to the Kurdish conflict in Turkey, where the PKK has been struggling for Kurdish rights to self-determination for over three decades, while also criminalising Kurdish political activity. Shilan’s trial is set to begin on 7th September 2015. The postcard campaign will continue as long at it is needed. If you would like to take part, send your postal address to estella24@tiscali.co.uk and let us know how many you need. Below you can read our original statement on the arrest, as well as a joint statement from various Kurdish community committees.

As well as sending postcards we also encourage everyone to write to Shilan in Holloway Prison to show her she is not fighting alone. Please send you letter via her solicitor:
Av. Ali Has Morgan Has Solicitors
Bank Chambers, 1st & 2nd Floor,
133 Stoke Newington High Street,
Stoke Newington
London N16 0PH

You can also write your own letter directly to Home Secretary Theresa May urging her to drop the charges and delist the PKK. The address is: Rt Hon Theresa May, 2 Marsham St, London SW1P 4DF

We are extremely concerned by the news that Silan Ozcelik, an 18 year-old woman from the Kurdish community in north London has been 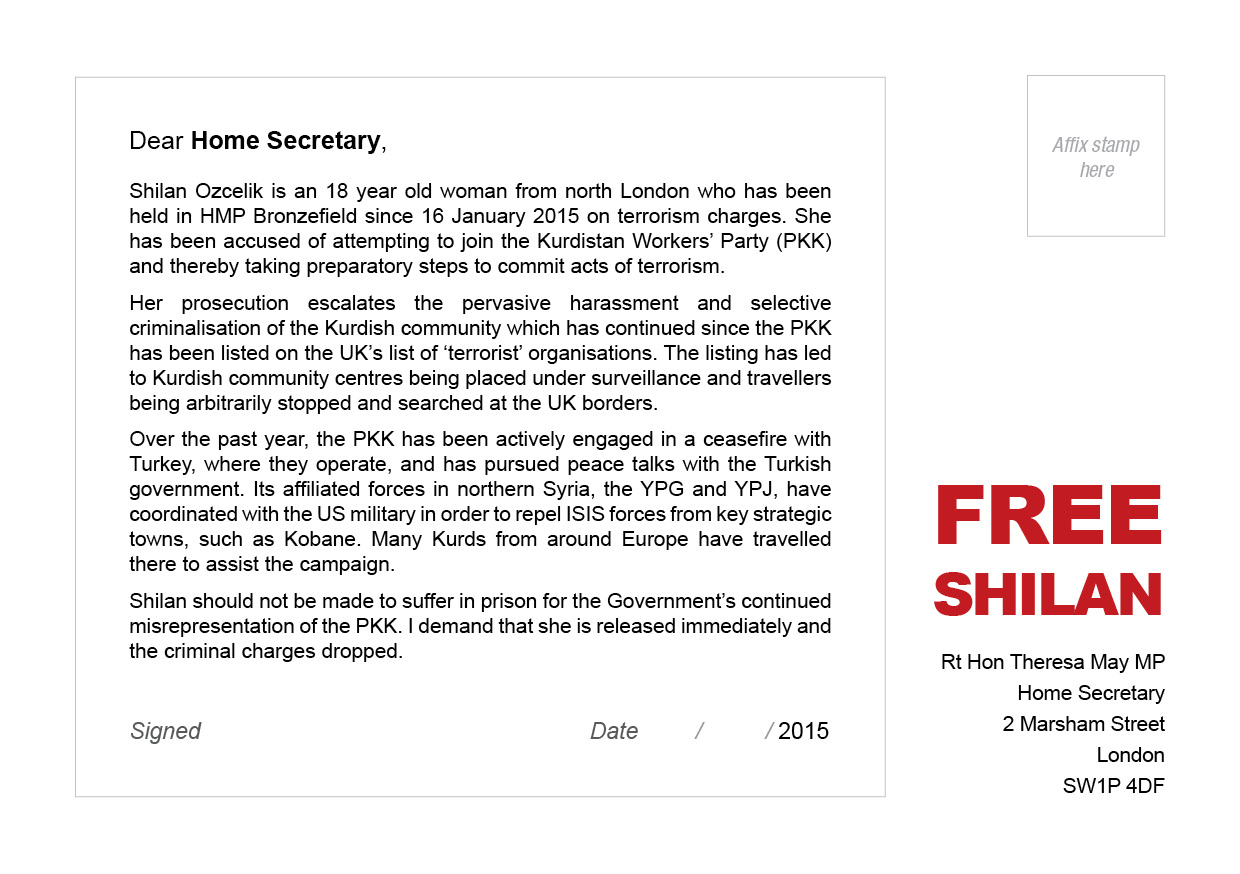 remanded for allegedly trying to join the Kurdish resistance against ISIS in northern Syria.

Yesterday, Silan was charged with ‘engaging in conduct in preparation to for giving an effect to an intention to commit acts of terrorism’ under section 5 (10) (a) of the Terrorism Act 2006 and remanded to Holloway prison to await trial on the 1st April.

We condemn the arrest as a blatant example of political and selective criminalisation of the Kurdish community at large, which has continued since the Kurdistan Workers Party (PKK) has been listed on the UK’s list of ‘terrorist’ organisations.

We emphatically reject this labelling of the PKK, which we believe confuses the Kurdish people’s legitimate struggle for self-determination with terrorism and has the effect of criminalising anyone in our community who is part of peaceful political activity. We know that Silan has never committed any act of violence and poses no threat to the people of this country.

The arrest comes at a time when the Kurdish struggle has been garnering unprecedented international support for their recent armed struggle against ISIS. There, the PKK’s affiliated forces, the YPG and YPJ, have received praise from activists and senior politicians alike for their incredible efforts fighting back ISIS from Kobane and parts of northern Syria and Iraq.

Given this context, the arrest of a young Kurdish woman for allegedly attempting to join the YPJ seems more than a little contradictory. The YPG and YPJ, who had been in a tacit alliance with US and British forces in the struggle for Kobane, are not listed on any terrorist list.

We call for Silan’s immediate release, and for the PKK to be removed from the terrorism list once and for all.

The Kurdish community and supporters of the Kurdish struggle are incensed at the arrest and imprisonment of 18 year old Shilan (Silhan) Ozcelik, who is accused of wanting to join the Kurdistan Workers’ Party (PKK) to fight the Islamic State of Iraq and the Levant (ISIL/ISIS).

The UK government in its steadfastness to appease the Turkish state, who are continuing to support ISIS, and withhold support from the Kurdish armed movement, the People’s Protection Units (YPG) and Women’s Protection Units (YPJ) has made clear whose side the government are on. The recent killing of the heroic Konstandinos Erik Scurfield (Kemal) in the battle against ISIS in Rojava (Northern Syria), has garnered a very positive approach from the British media and public. The UK government has been afraid of this support for the Kurdish struggle because for a 100 years the UK state has been one of the initiators and supporters of Kurdish oppression in the Middle East. This is why they have delayed and not supported the repatriation of Konstandinos Erik Scurfield and criminalized the struggle he has sacrificed his life for.

The Kurdistan Worker’s Party, which is on the terror list in the UK, EU and USA was added to this list in 2002 during a 5 year unilateral ceasefire, at the behest of Turkey. The PKK have never posed a threat to the UK and threatened this country. This listing is evidently political and to do with the economic and political ties between the Turkish and British states. Using this listing the UK government has been criminalising the Kurds for at least 13 years, yet not one Kurdish individual has been charged and convicted of being a PKK member, despite many raids, arrests and intimidations. The case of Shilan Ozcelik is the most recent chapter of this story and the Kurdish community are now concerned that the UK government will, in its attempt to seem impartial to ‘certain’ sections of British society, once again criminalise the community who have been the biggest supporters of the international fight against ISIS terror and fascism.

To call for the immediate release of Shilan Ozcelik and to call for an end to the criminalisation of the Kurdish community we are organising a picket outside Holloway Prison, tonight (13.03.2015) at 6pm where Shilan Ozcelik is being held.