Your Freedom and Mine: Booklaunch Edinburgh.

On Thursday, 15 November 2018, we hosted a successful event in promotion of the new book Your Freedom and Mine: Abdullah Öcalan and the Kurdish Question in Erdoğan’s Turkey. The book is a compilation of pieces from a variety of contributors with various perspectives from across the Kurdish movement. It centers on the illegal imprisonment of Abdullah Öcalan, the ideological leader of the Kurdish struggle for self-determination, and in particular the role and impact of the various international campaigns that have been founded in solidarity with the Kurdish struggle. 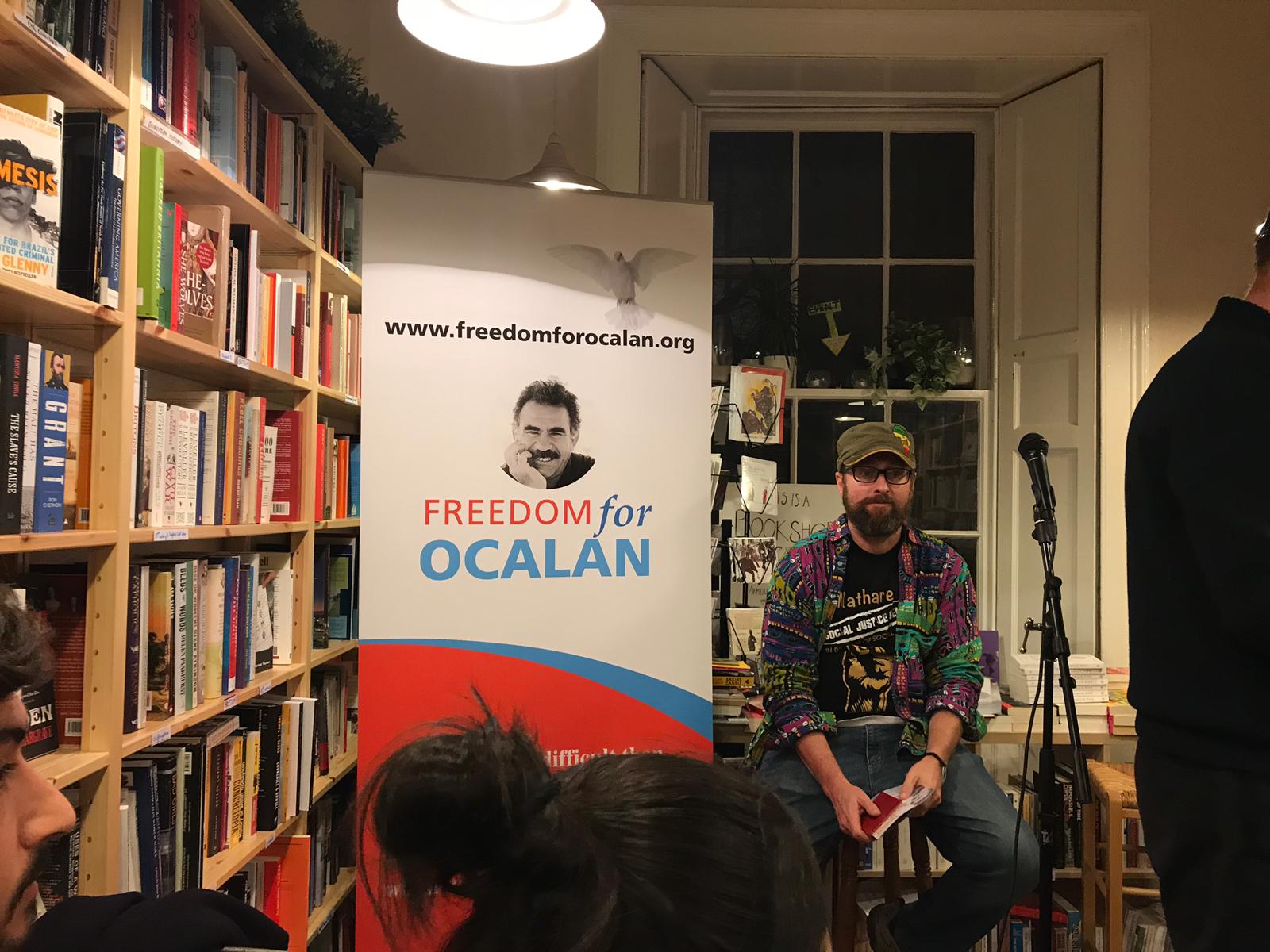 The event was hosted at Lighthouse Books in Edinburgh, Scotland from 7:30-9:00 p.m., with approximately 50 audience members in attendance. There were three speakers for the event: First, Dr. Thomas Jeffrey Miley, lecturer in Sociology at Cambridge University, member of the EUTCC delegation to İmralı prison, and co-editor of Your Freedom and Mine. Second, James Kelman, acclaimed Scottish novelist, winner of the 1994 Booker Prize, and life-long political activist with long history of involvement in the Kurdish freedom movement. Third, Stephen Smellie, depute co-convener of UNISON the union, co-convener of Scottish Solidarity with Kurdistan, and long-time activist for Kurdish rights in the UK. The event was the first stop of a lecture tour across Scotland from Dr. Miley aimed at promoting the book with stops scheduled in Glasgow and Dundee in the subsequent days.

The event began with Stephen briefly introducing the book, the topic, and the speakers. Then Dr. Miley spoke about the history of his own involvement with Kurdish struggle and his experiences as part of the EUTCC delegation. He spoke about the uniqueness of the Kurdish struggle for an authentically democratic society, and the impact that visiting Rojava and seeing this system in its embodied form had of his own personal beliefs. He then offered a stirring discussion of how the ideology of democratic confederalism offers a general revolutionary model, and closed by articulating his hope that the idea of democratic confederalism could spread to other oppressed peoples, kindling ‘revolutionary flames’ across the globe.

Then, after a brief interlude and further introduction by Stephen, James spoke about the history of the formation of the modern Turkish state to add further background to the struggle. In particular, he spoke about the pros and cons of the policies of Mustafa Kemal Atatürk, noting how he was responsible for the modernisation and secularisation of the Turkish state, but at the cost of severe policies of repression, assimilation, and elimination of dissenting voices from the left. He then compared this history to the history of industrial Britain, noting the parallels between the British tactics of modernisation and their harsh suppression of the British labour movements in the early 20th century, discussing local leftist hero and republican socialist James Connolly in particular. He then discussed the importance of maintaining an awareness of history in the formation of successful social movements, and closed by stressing the necessity of mutual solidarity efforts from people everywhere struggling for justice and social change.

In closing, Stephen briefly discussed the history of campaigns of solidarity with the Kurdish struggle in Scotland, and the efforts of the unions in particular. The event was then opened up for questions, where all three speakers spoke about their opinions regarding the future of the Kurdish struggle, and what actions can be taken my local members of the community to stand in solidarity with the Kurdish freedom movement. After the event finished, we had three audience members sign up to pre-order a copy of the book.