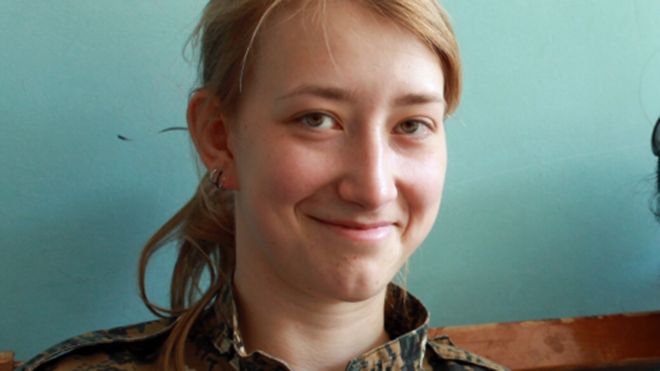 You all know my dear daughter Anna.

She believed in your vision of an ideal society, based on honour of the feminine, inclusion of all ethnicities and respect for nature.

She was willing to defend that ideal with her life, as you also are.

Many hundreds of you have already given your lives defending it from those who are determined to destroy it.

Anna’s death, though I could not have wished it, has drawn the world’s attention to you.

But the world doesn’t understand why your project, the enclave of Rojava, attracted her so.

Nor does the world understand why the Turkish and Syrian states are so determined to wipe it out.

Worse still, the world doesn’t know that the high-tech weapons which have killed so many of you, and which killed my daughter, were designed and manufactured in Britain. You know. You know all this.

I don’t have to tell you that the Turkish state hates the Kurds because they think the Kurds threaten their national integrity.

But you may not know that the British state once saw our own minorities, the Irish, Scots and Welsh, as threatening in the same way. We, the British, did to them what the Turks are doing to you now. We realised, perhaps too late, the immorality of our ways.

The world has moved forward. Surely it has – hasn’t it? How can anyone see these atrocities as anything but horrible, outrageous, unacceptable – whether or not they are dressed up in superficially plausible arguments? The spurious economic arguments that Britain uses to justify arms sales to Turkey?

That Turkey uses to justify genocide of the Kurds? How can this be? It breaks my heart. It destroys my hope.

Yet there is hope. Many millions of us here in Britain, in Iceland, in all the countries of Europe, in America – we are aware of your plight. We will not let you go unnoticed.

We will bring the injustice and horror of your treatment before our governments. We will not forget you. Just as you will never forget my daughter who lived, laughed, danced, shared, fought and died with you.

Together we will ensure that she did not die in vain.

With love and determination,”