Victory in Kobane: What next in the Rojava Revolution? 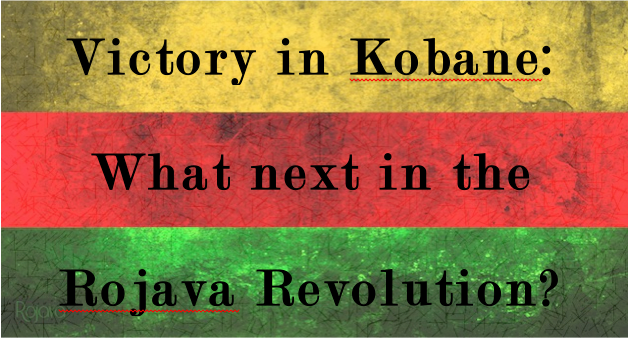 At mid-afternoon on 15 September 2014, the foreign minister of Kobane, Omer Mus, received a call from a UN official stating that Turkey was prepared to take in 40,000 refugees crossing the border from Kobane. Hours later, ISIS began attacking the city from all three sides and the YPG and YPJ forces began a massive evacuation of tens of thousands of villagers. Those that remained took part in a historic defence of their city, which, had it not been successful, could have had disastrous consequences for the people of the region.

In the months that followed, Kurdish fighters refused to keep to the expected script and fought an extraordinary battle to maintain control of the town. The Kurdish region of Syria, known as Rojava, and its little-known revolution in the midst of Syria’s civil war was suddenly thrust into the spotlight. The question was repeated over and over again: how can it be the poorly equipped YPG and YPJ can hold off one of the most brutal fighting regimes the region has seen, a force which overran Iraq’s second largest city in a day and had the Iraqi army running for the hills?

The answer, it seems, lies in the foundations of the social revolution that has been sweeping the region.

This event will go beyond the siege on Kobane to explore the depth of Rojava’s revolution and its potential impact on the region. We are very lucky to have well-known author and activist David Graeber, who recently visited Rojava, and Havin Guneser, member of the International Initiative – Freedom for Ocalan, providing us with a first-hand insight into the revolution, its history and its potential for the future.

Havin Guneser is an engineer, journalist and a women’s rights activist with intimate knowledge of Kurdistan and the Middle East. In recent years she has translated Abdullah Öcalan’s writings from prison. She is a spokesperson for the International Initiative “Freedom for Abdullah Öcalan–Peace in Kurdistan”. Listen to Havin’s conference paper on the Kurdish-Turkish peace process

David Graeber, American anthropologist, political activist and author. He is currently a professor at the London School of Economics and was formerly an associate professor of anthropology at Yale University. David also played a role in the Global Justice Movement and was one of the earlier organisers of Occupy Wall Street. He is the author of numerous books including The Democracy Project, and Debt: The First 5,000 Years (2011). Read his article for Lib.com on Rojava

Margaret Owen is a human rights barrister and patron of Peace in Kurdistan Campaign. She was among the first UK visitors to Rojava after they declared a transitional regional administration in 2013. She is the founder and Director of the International NGO Widows for Peace through Democracy.