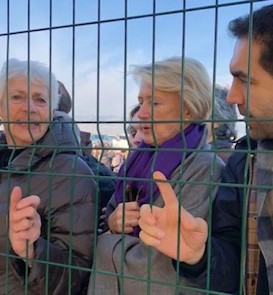 Myself and the other international observers were in a sombre mood as we boarded the bus that would take us to the Sincan prison court so we could watch the trial of Selahattin Demirtas. This was due to developments in Turkey over the past few days and most of us expected that, despite assurances given to us last December, we would not be granted admission to the trial.

Upon arriving at our destination these grave expectations were proven correct. We were not allowed to enter the court. Our party joined the crowds of angry people, including diplomats who were British, Canadian, US, Norwegian, Danish, the foreign press and solidarity action groups, in pushing at the gate, hoping to get inside the courtroom. 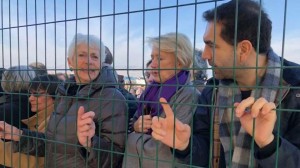 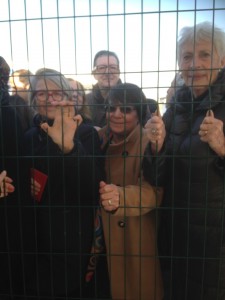 (From right to left) Margaret outside court with Leila Khaled, Michel Laurent and Sylvie Jan France

Even the German Ambassador was refused admission, but despite the presence of armed police, he managed to make a statement to journalists who crowded around to hear his reaction. A French news team working for AFP (Agence France-Presse) interviewed me about the situation. 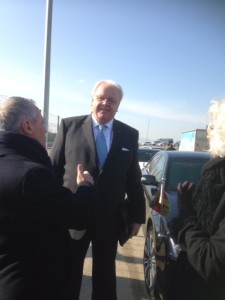 It’s the same story as last December. This is an unfair political trial, closed to all except AKP (the Justice and Development Party) members and AKP press (all independent media have been shut down in Turkey since the so-called attempted coup of 2016). Only those with Turkish citizenship can even be considered for entry to the court, but even these are heavily screened to exclude those suspected of allegiance to the protest groups.

Back in the city, later that day, we international observers were invited to a briefing at the HDP (the Peoples’ Democratic Party) offices. There we were given insights into the trial, and its background from Bayram Aslan (Demirtas’ Lawyer), Ayse Acar Basaran (an MP), and Hisyar Osoy (the Bingol MP responsible for Foreign Affairs). They provided us with a detailed account of the political and legal contexts that the Demirtas’ trial can be placed within. The group also outlined what can be expected in the coming months as Turkey continues its war in Afrin and intensifies the crack down on all forms of democratic protest.

Hisyar Osoy, himself a former academic, is an elegant speaker, but the way he described Demirtas’ defence speech to the court made us wish we had been present. We hope that we can soon read the transcript. Demirtas apparently quoted from Plato, Garcia Lorca, Mark Twain and Orwell, as he berated President Erdogan and the AKP for their shameful unlawful dismantling of all the basic structures essential in a democratic state.

Demirtas and his lawyers are said to have argued forcibly that the trials of elected MPs are unjust and unlawful, since the lifting of parliamentary immunity from many HDP deputies was against the Turkish Constitution. The amendment to the Constitution removing the immunity was itself unlawful since none of the procedures set out in the Constitution had been followed, such as that all amendments must be approved by Parliament.

At one point, we were told, during the trial that Demirtas’ lawyer had to defend the charge that the accused had allegedly “founded and managed” a terrorist organization. The lawyer apparently responded by reminding the Judge that Demirtas had been only been 5 years old when the PKK (the Kurdistan Workers’ Party) was founded.

The trial goes on today, and it is expected that Demirtas will be returned to his Edirne prison. The case will be adjourned to a future date, during which time even more charges may be added to the indictments.

“Tell the world what you have seen, and come back to us, bringing more friends, to support us in our struggle for peace, freedom, justice” said Hisyar Ozsoy as he thanked us for our presence, and regretted how we had been treated. “The whole of Turkey is an open prison now. To be anti-war is a crime, and no Rule of Law exists. But we are vibrant and dedicated, we will never give up, however many more deputies Erdogan removes from Parliament. We need your support,” he concluded.

In the meantime, as I write, more arrests and detentions are occurring across the country. Former HDP co-leader Serpil Kemalbaym, who has been detained since Monday, is being held in an Ankara police station. She was not even allowed to receive a change of clothes that her family had brought for her yesterday. In protest, she has started a hunger-strike.

We were also been informed about the continuing and escalating forms of torture in places of detention, transit police vans, police stations and prisons; the practice of intimate body searches, sexual abuse, beatings, forcing detainees to stand for long hours, punishments that prohibit family visits or contact, and the use of solitary confinement. Moreover, an edict has recently been passed to require all persons in pre-trial detention under the anti-terror laws, whether convicted or awaiting trial, to wear particular “uniforms”. As in the case of Kemalbay, prisoners are very likely to go on hunger strike in protest of this imposition that depicts them as guilty even before their cases have been heard.

Selahattin Demirtas’ trial continues. However as I was waiting at Istanbul airport for my flight home there is bad news for the Kurds. I read that on Thursday Belgium’s Supreme Court, the Court of Cassation, overturned an unprecedented appeal court decision to declare the PKK not a terrorist organisation, but rather a party linked to an armed conflict. This means it is highly likely that the 33 Kurds living in Belgium will be tried as suspected PKK members before possibly being extradited back to Turkey where they will face prosecution. Belgium lawyers, who did not wish to be named, have said they felt that in the past the Supreme Court has been scared of the implications for Belgium’s relations with Turkey if it upheld the appeal that would have thrown out the prosecution against the 33 Kurds as well as two Kurdish-language TV stations based in the European country. President Erdogan is likely to be greatly pleased and encouraged by this judgment, but it could bode ill for Demirtas and the pro-Kurdish HDP as a whole.