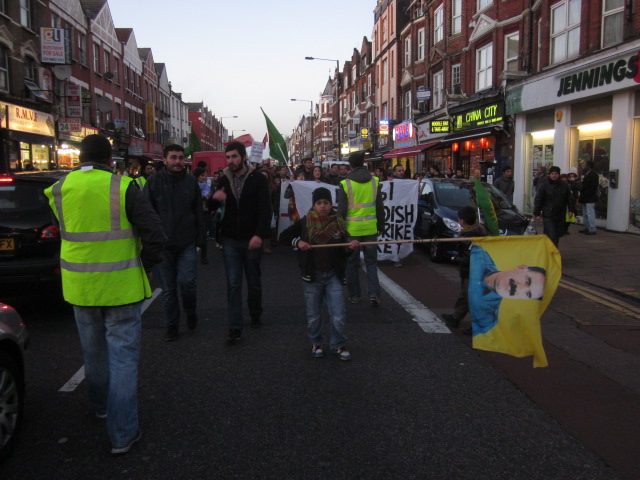 The 680 hunger strikers include elected representatives who have been jailed under the repressive policies of Turkish Prime minister, Recep Tayyip Erdoğan. They are demanding Kurdish language rights, and the end of the isolation in jail of Abdullah Öcalan, leader of the Kurdish Workers’ Party (PKK), to help to negotiate a political settlement to the Kurdish Question. Other Kurds have joined the strike by refusing food in solidarity, including MPs belonging to the pro-Kurdish BDP (peace and democracy) party. END_OF_DOCUMENT_TOKEN_TO_BE_REPLACED

Turkey is in a complex situation, which the Prime Minister Recep Tayyip Erdogan, and his AKP government, seem to want to cover up. The incontestable economic successes – whereby the completely under-developed rights of the working population have been accepted – make the country a power factor between East and West. The strategic location of Turkey for the transportation of oil and gas from the Caspian region and the Middle East into Europe provides the ever-assertive government with a comfortable negotiating position with the Europeans. This clearly allows Ankara to bring EU-membership into play without having to compromise on the biggest obstacle to its membership so far – the unresolved Cyprus question. Greece is weak and is having its sovereignty rapidly taken away, almost degraded to a protectorate. Why back down against the EU and the UN, when, evidently, a politics of “banging one’s fist on the table” is the only one honoured? This is also apparent in the fact that Erdogan can afford to pick a fight with a state, with which it not so long ago had a distinguished relationship – Israel, the EU’s most controversial protegé. END_OF_DOCUMENT_TOKEN_TO_BE_REPLACED

Several Kurdish activists in London will begin a five-day hunger strike Wednesday 14 March at 8am, in protest against increasing repression in Turkey. END_OF_DOCUMENT_TOKEN_TO_BE_REPLACED

Solidarity with the opposition in Turkey, that is the real strength of democracy!

We invite you to join the 2012 Newroz celebrations between 19 – 25 March, and to participate in the main Newroz event on 21 March in Amed (Diyarbakir), organised by the Peace and Democracy Party (BDP). An invitation from BDP Vice Co-Chairperson and Foreign Relations Commission Chair Nazmi Gur is attached, along with a registration form for seats at the covered grandstand on 21 March. END_OF_DOCUMENT_TOKEN_TO_BE_REPLACED

Kurds are marching for the freedom of their leader Abdullah Ocalan! END_OF_DOCUMENT_TOKEN_TO_BE_REPLACED

The following is a dossier produced by CENI Kurdish Women’s Office for Peace and the KNK, which provides a useful account of recent developments in Turkey, the actions of an increasingly repressive AKP government and the role and significance of Abdullah Ocalan’s arrest and continued imprisonment for a solution to the Kurdish Question. You can download the dossier here (pdf).

Stop the political genocide and femicide against the Kurds in Turkey!

END_OF_DOCUMENT_TOKEN_TO_BE_REPLACED

Yesterday, 8 February 2012, the Kurdish Community in London held a march to commemorate the 40th day of mourning for the 34 Kurdish civilians killed in a bombardment by Turkish fighter jets on 28 December 2011. The marchers carried 34 symbolic coffins from Amnesty International to the Turkish Embassy, where officials secretly filmed the protesters from inside the building. The peaceful demonstration was organised by several Kurdish community centres in London and attended nearly 200 people. You can read the original statement about the march below:

END_OF_DOCUMENT_TOKEN_TO_BE_REPLACED

The day of action on 24th January, which saw simultaneous actions by lawyers taking place in major cities across Europe, was marked in London with a protest outside the Turkish Embassy, and organised by CAMPACC and Haldane Society of Socialist Lawyers, to highlight the intolerable conditions faced by lawyers in Turkey. END_OF_DOCUMENT_TOKEN_TO_BE_REPLACED

Reversing the spiral of repression in Turkey: the Kurdish view
Time for a real democratic opening to the Kurds

Come and hear the Peace and Democracy Party (BDP) perspective on the current situation inside the country:

Four children who were incarcerated in detention centres for 13 months – the longest time children have ever been locked up in the UK – have won a six-figure compensation payout from the Home Office more than eight years after their release. END_OF_DOCUMENT_TOKEN_TO_BE_REPLACED