The Ilisu Dam: a critical juncture

Over the past two decades, we have written to your predecessors on numerous occasions (most recently on 10 June 2019) to express our grave concerns over the adverse environmental, social and geopolitical impacts of the Ilisu Dam on the River Tigris in Turkey, which is now nearing completion.
END_OF_DOCUMENT_TOKEN_TO_BE_REPLACED

Figure 1: Soldiers at Hasankeyf surrounding protesters not long before speakers were due to start on the day of the Big Jump. After negotiations the army agreed to allow the speeches but not for anyone to jump into the river.

This year, on 14th July, a date marking worldwide campaigns to save and preserve vital freshwater ecosystems, the three of us joined over a hundred local and international activists at Hasankeyf in southeastern Turkey. 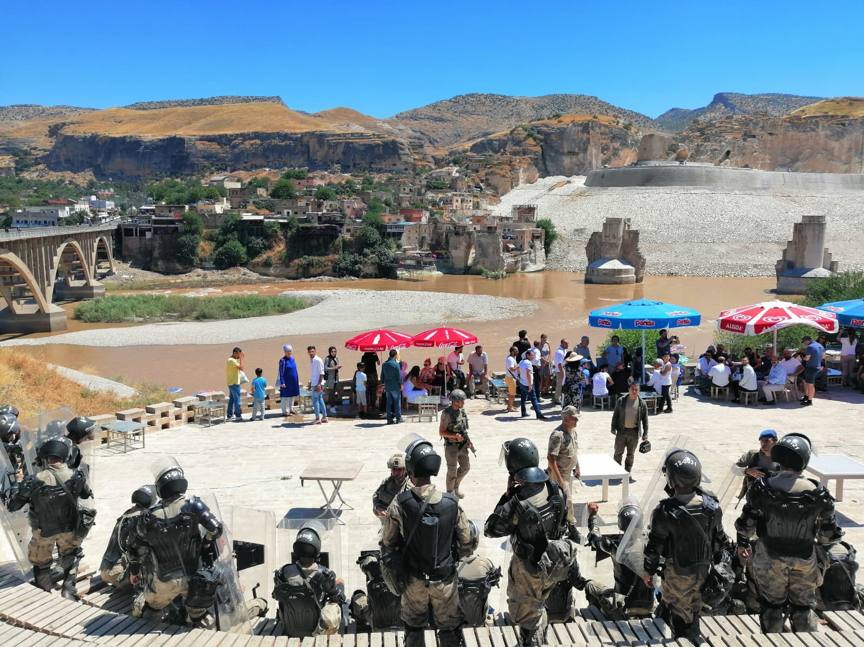 END_OF_DOCUMENT_TOKEN_TO_BE_REPLACED

We received this statement from a group of solidarity activists raising their voices about the massive displacement and ecological destruction taking place in the regions around Hasankeyf in southern Turkey, where a huge internationally funded dam building project has been ongoing for several years. The group protested against Andritz Hydro, a company based in Belper, Derbyshire, which is playing a leading role in the construction of the Ilisu dam, which, if constructed, would leave the 12,000 year old town of Hasankeyf under water.

Find out more about actions agains the Ilisu Dam here.

Today people came together to protest against Andritz Hydro, a company that plays a leading role in the construction of the Ilisu dam in North Kurdistan (the area of Kurdistan which lies within eastern Turkey).

We hung a banner from a bridge which forms part of the building where Andritz has its offices in Belper, Derbyshire in the UK. We hung a banner, which read: “Andritz Hydro = Ilisu Dam. 78,000 people displaced in Kurdistan.” END_OF_DOCUMENT_TOKEN_TO_BE_REPLACED