The 9th October marks the 18th anniversary of the expulsion of Abdullah Ocalan from Syria where he had remained for the best part of twenty years.

In 1998 Turkey was sabre rattling and openly threatening Syria to remove Ocalan and renounce its support for the PKK.  Tremendous political pressures were exerted on Damascus, which was beset by severe economic strains and the weakening of its relations with its traditional global ally, Russia, itself was deeply damaged politically and embroiled in a destabilising financial crisis. Despite all the pressures, Damascus did not hand Ocalan over to Turkey, but was forced to insist that he left the country. Ocalan fled to several countries including Russia, Italy and Greece in his ultimately unsuccessful search for political asylum. His fate was all played out in the full attention of the international media until in February 1999 he was eventually apprehended in Nairobi by an intelligence operation which saw Turkish state security forces co-operating with the CIA and other security agencies. END_OF_DOCUMENT_TOKEN_TO_BE_REPLACED

Respect for Abdullah Ocalan, the imprisoned leader of the Kurdish Freedom Movement, “chained to the rock of Imrali,” a symbol of resistance, of fortitude and resilience, a responsible leader, a prophet, a man with a powerful political vision.

A vision that has inspired the revolutionaries in Rojava in Syria, and that fuels the Kurdish resistance to Erdogan’s tyranny in the southeast of Turkey (and beyond).

The heroic defence of Kobane caught the world’s attention, the movement’s will to struggle, its ability to mobilize the people for collective self-defence, to sacrifice and to die for a cause, and not just for any cause, for a good cause: the project of “democratic confederalism,” a project which represents the only alternative to the negative dialectic of tyranny and chaos currently tearing the Middle East apart, or, in Ocalan’s terms, the only alternative to “hierarchical and dominated civilization.” END_OF_DOCUMENT_TOKEN_TO_BE_REPLACED

Dear all, today I will talk about the political situation in Turkey.

In April 2016, the ‘Freedom for Öcalan’ campaign was started in the UK. The members of the campaign are now totally convinced that a peaceful solution to the current conflict will only be found if the jailed Kurdish leader Abdullah Öcalan is freed and allowed to play a full role in the development of a new peace process. Indeed, for the Kurdish people and supporters across the world, these campaigns that build solidarity amongst trade unionists, for the freedom of Öcalan constitute a significant initiative. END_OF_DOCUMENT_TOKEN_TO_BE_REPLACED

Chair, conference, ………………. Unite the Union moving emergency motion ….. on Turkey and solidarity with the Kurdish population.

Colleagues it’s absolutely right that various unions have come together to submit this motion to conference.

Anyone with even one eye on the news will have seen the dramatic deterioration of the situation in Turkey and the slide towards a violent and authoritarian regime.

While this has been going on the wider world has kept disgracefully quiet, in the hope that if they say nothing then President Erodgan will stick to the deal and keep the refugees from Syria in Turkey and stop them disturbing us here in Europe. END_OF_DOCUMENT_TOKEN_TO_BE_REPLACED

Here’s our call for international solidarity for Öcalan’s freedom.

We’re waiting for your support through actions, translating and

We’re also happy to get pictures and videos from your actions!

Nearly 300 people rallied in London on Sunday 14th July to protest the continued incarceration of Abdullah Ocalan, the imprisoned Kurdish leader. Steve Sweeney, UNITE media branch and member of the Imrali peace delegation  and Father Ryan, Chair of Westminster Justice and Peace Commission and delegation member, were among the speakers who emphasised the increasingly precarious situation for Ocalan as the Turkish state spirals out of control following the coup attempt on 15th July. END_OF_DOCUMENT_TOKEN_TO_BE_REPLACED

AN APPEAL FOR SUPPORTING THE  ‘FREEDOM FOR OCALAN’ CAMPAIGN

In April 2016,  UNITE and GMB, two of the biggest trade unions in the UK, together with a number of sympathetic MPs, launched the ‘Freedom for Öcalan’ campaign. This was the result of a UNITE and GMB delegation visiting the region and engaging in discussions with local groups on the ground. The unions are now totally convinced that a peaceful solution to the current conflict will only be found if the jailed Kurdish leader Abdullah Öcalan is freed and allowed to play a full role in the development of a new peace process  END_OF_DOCUMENT_TOKEN_TO_BE_REPLACED

Meet at 2pm Trafalgar Square for a rally followed by March to BBC Headquarters. Following the coup attempt on 15th July , the atmosphere is disintegrating and concern is mounting for the wellbeing of the Kurdish leader, Abdullah Ocalan who is being held in solitary confinement in an island prison. No one has been allowed access , including his lawyers and family, since April of last year. Please join the protests all over Europe this weekend to demand his freedom. 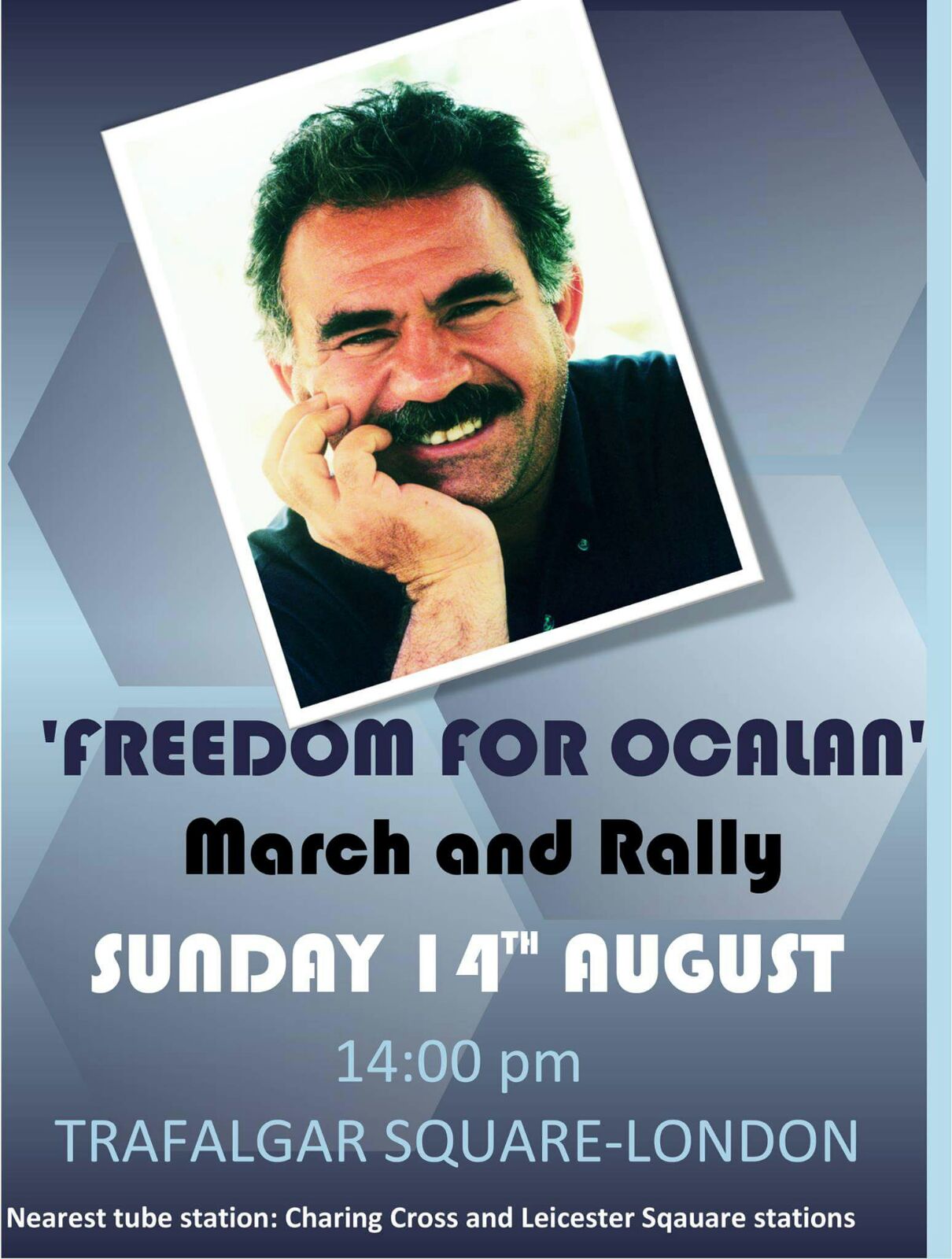 Re: Demand for urgent meeting with Abdullah Ocalan

As you are well aware, the coup attempt in Turkey on 15th July 2016 proved to be unsuccessful, but it is clear that the aftermath will have significant political implications.

When President Tayyip Erdogan took a decision to intensify the war on the Kurds and destroy Kurdish towns and cities a year ago, at the same time he took measures to repress Kurdish civil society. The immunities on MPs were removed which was seen as aimed at the HDP in particular and Mayors were imprisoned and removed from their posts. The scale of this repression of the Kurdish people was unprecedented in recent history. END_OF_DOCUMENT_TOKEN_TO_BE_REPLACED