GLOBAL RALLY AGAINST ISIS for Kobane for Humanity

[youtube https://www.youtube.com/watch?v=9dontIQzNR4]
The Global Rally was a tremendous success and exceeded expectations – it was huge example of global solidarity which saw hundreds of thousands of people all over the world taking to the streets to participate in demonstrations in support of the Kurds and Kobanê. It represented a clear and unambiguous call for a worldwide recognition of the “democratic autonomy project” in Rojava which promises a free and democratic future for all the peoples of Syria. END_OF_DOCUMENT_TOKEN_TO_BE_REPLACED

Thousands are expected to gather in London’s Trafalgar Square this Saturday following a global call for action by signed hundreds of internationally renowned academics, writers, lawyers politicians and activists.[1] The final list of signatories is attached.

The rally, which will take place from 2pm until 5pm, has been organised in solidarity with the defence of Kobane, a city in the democratic autonomous region of Western Kurdistan in Syria (Rojava) which has been the scene of a fierce battle with ISIS militants in recent weeks. END_OF_DOCUMENT_TOKEN_TO_BE_REPLACED 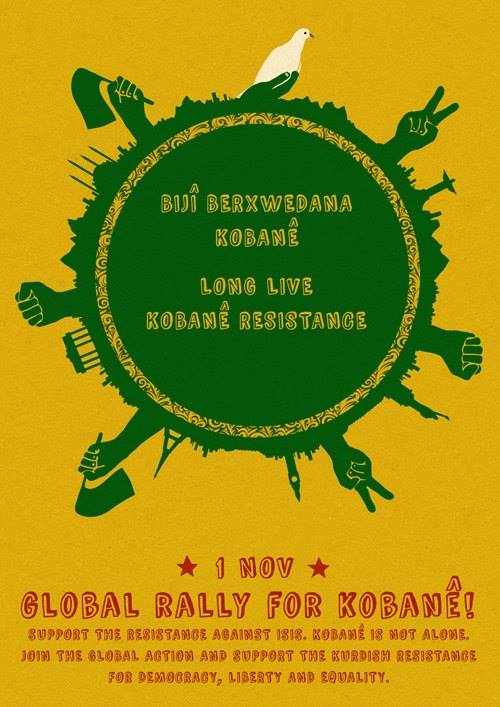 Join us for a rally in London on Trafalgar Square on 1 November 2-5pm!

Hundreds of individuals and organisations representing thousands of members from across the world have signed an urgent call for action appealing to people all over the world to show solidarity with Kobane, which is still under siege by ISIS and facing the possibility of a genocide.[1]