Leading Scottish writer James Kelman was among the speakers at a ceremony to honour imprisoned Kurdish leader Abdullah Ocalan held at the University of Strathclyde Students Association (USSA) in Glasgow on Saturday 20 June.

Kelman reflected on history and recalled how,

“The Kurdistan Workers Party (PKK) had been a legitimate political party until the Turkish State began its operation to have the party criminalised as a terrorist organisation. In the 1990s they discredited PKK by blaming them for a massacre in an attempt to influence members of the European Parliament. This was later exposed as a fabrication of the truth, but the Turkish State succeeded in its aim, and the PKK leadership, including Abdulla Ocalan, was outlawed as a result.” 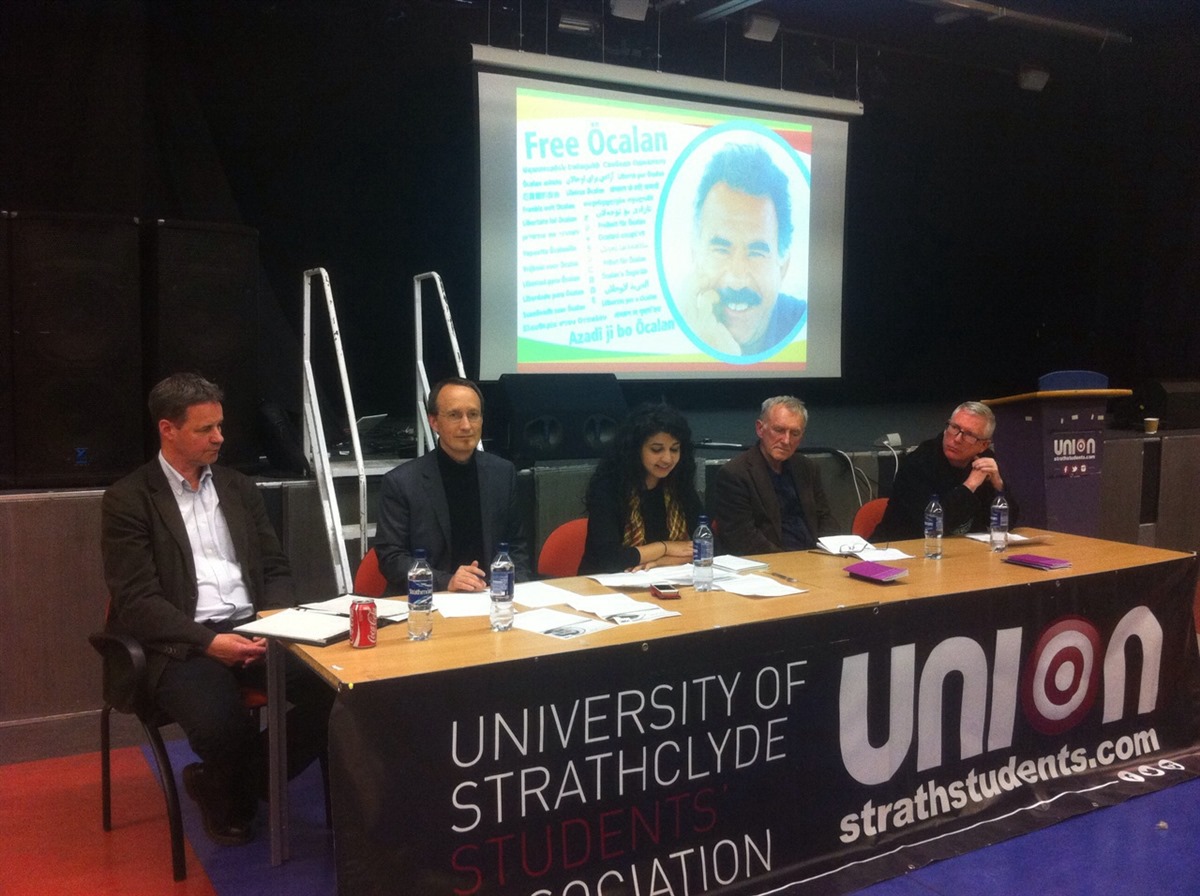 In the late 1960s there was a strong students’ movement in Turkey and Ocalan emerged from this. In 1971 a coup by the Turkish military ended that brief period.  Kelman recalled studying the Turkish constitution of 1982 and described it as fascist. He read from it and highlighted the section that said there can be “No thought or action against Turkish identity.”

“It was a crime to sing Kurdish songs, give your children Kurdish names. Even to say the word Kurdistan was against the law.”

Kelman proclaimed the “Freedom to know our own history” and a people’s right to determine their own existence. He said of Ocalan,

“His vision is essentially anti-state and I approve of that.”

He ended his contribution by saying

“This honour that Strathclyde students are paying to Abdulla Ocalan represents much more than an honour to one individual, it recognises the justice of the Kurdish struggle.”

Roza Salih, representing the USSA, presented an award of an Honorary Life Membership of the USSA for Abdullah Ocalan. Receiving the award on behalf of Mr. Ocalan was Reimar Heidar from the Initiative for Freedom for Ocalan.

In presenting the award Ms Salih reminded the audience that the first recipient of such an award was Nelson Mandela in 1984 when he, like Abdullah Ocalan today, had been imprisoned for many years and who was regarded by many, including the government of the United Kingdom, as a terrorist.

In his acceptance speech Mr. Heider explained that Ocalan had founded the Kurdistan Workers Party in 1978 which went on to lead the armed resistance against a military regime which was holding Turkey and North Kurdistan in a bloody grip after the 1980 military coup. He explained

”Ocalan was always much more than a guerrilla leader, he is a politician, political writer and philosopher and as such he has inspired millions.

Maybe the best example of what Ocalan stands for today is the Revolution in Rojava, the northernmost part of Syria. There, the Kurdish movement has succeeded in winning over people of all ethnicities and creeds into a common effort to implement Ocalan’s vision of a truly democratic model for society. It was   through this inspiration that thousands of volunteers were able to resist and defend their model of togetherness against the plague that haunts the region today, the black flagged forces of the Islamic State.”

Mr Heider described the development of Ocalan’s ideas and their impact on the Kurdish struggle. He said

“Ocalan managed to transform the struggle of large portions of the Kurdish people from one for an independent state into a fight for what they call democratic autonomy because he widened the perspective on liberation.

Today, the most important part of the liberation struggle in Kurdistan is the struggle for the liberation of women. Ocalan regards the oppression of women to be the oldest and most deep-rooted of all ways of oppression in society, preparing the grounds for all other forms of oppression. His extensive talks and writings on this topic have been the main source of inspiration for the Free Women’s Movement in Kurdistan, the most powerful women’s movement in the Middle East and possibly worldwide.

He referred to the international campaign for Ocalan to be released from prison in Turkey. He stated

“The effort for Ocalan’s freedom is not only about one individual. It is not even only about the Kurdish people. It is about the leading figure for the democratization of the Middle East today, it is about the freedom of peoples, ethnic and religious communities, and most of all about the liberation of women. Ocalan’s freedom is crucial to bring the effort for a peaceful resolution of decade-old conflicts to a successful end. It is for this that I ask you all to join the 10.3 million signatories of the Freedom for Ocalan campaign and raise your voice to the same end.”

Also speaking at the ceremony was Stephen Smellie, Trade Union Officer for Peace in Kurdistan and Depute Convenor of UNISON Scotland. Mr Smellie recalled his visits to Kurdistan over a number of years where the ideas of Ocalan had been referred to by people he had met who were involved in the struggle for Kurdish rights.

“In 2002 when the Kurdish language was banned in official circles and even using the word Kurdistan could get you arrested, I was told by a Kurdish activist that ‘Ocalan and the PKK have taught me that I am a Kurd and that I can call myself a Kurd. He has given me back my country.’

In 2014 when I met people from Kobane they described the democratic, secular and gender equal society that they were trying to build in Kobane and Rojava as having been inspired by Ocalan.

I am therefore humbled to be present at this ceremony to honour Abdullah Ocalan.”

Dennis Fallen who lived in Sweden for a number of years and studied and worked with Kurds recalled how they formed a football team, ‘The New Swedes’ and offered solidarity when the PKK was falsely blamed for the murder of Olaf Palme, the Swedish Prime Minister.

“There was an attempt to equate Kurdish campaigners with terrorism in order to silence them. I knew a lot of Kurds then and I congratulate the USSA on this initiative.”

A further ceremony is planned for later in the year to unveil a plaque commemorating the lifetime membership of Mr. Ocalan.

Roza Salih and Reimar Heider will be available for interview on Friday 19th and Saturday 20th June. Please contact Roza to make arrangements.

Who is Abdullah Ocalan

Ocalan: On my thesis of the Democratic Nation Resolution