Save Hasankeyf: Statement from the demonstration today at the Andritz offices, Derbyshire, UK

We received this statement from a group of solidarity activists raising their voices about the massive displacement and ecological destruction taking place in the regions around Hasankeyf in southern Turkey, where a huge internationally funded dam building project has been ongoing for several years. The group protested against Andritz Hydro, a company based in Belper, Derbyshire, which is playing a leading role in the construction of the Ilisu dam, which, if constructed, would leave the 12,000 year old town of Hasankeyf under water.

Find out more about actions agains the Ilisu Dam here.

Today people came together to protest against Andritz Hydro, a company that plays a leading role in the construction of the Ilisu dam in North Kurdistan (the area of Kurdistan which lies within eastern Turkey).

We hung a banner from a bridge which forms part of the building where Andritz has its offices in Belper, Derbyshire in the UK. We hung a banner, which read: “Andritz Hydro = Ilisu Dam. 78,000 people displaced in Kurdistan.” 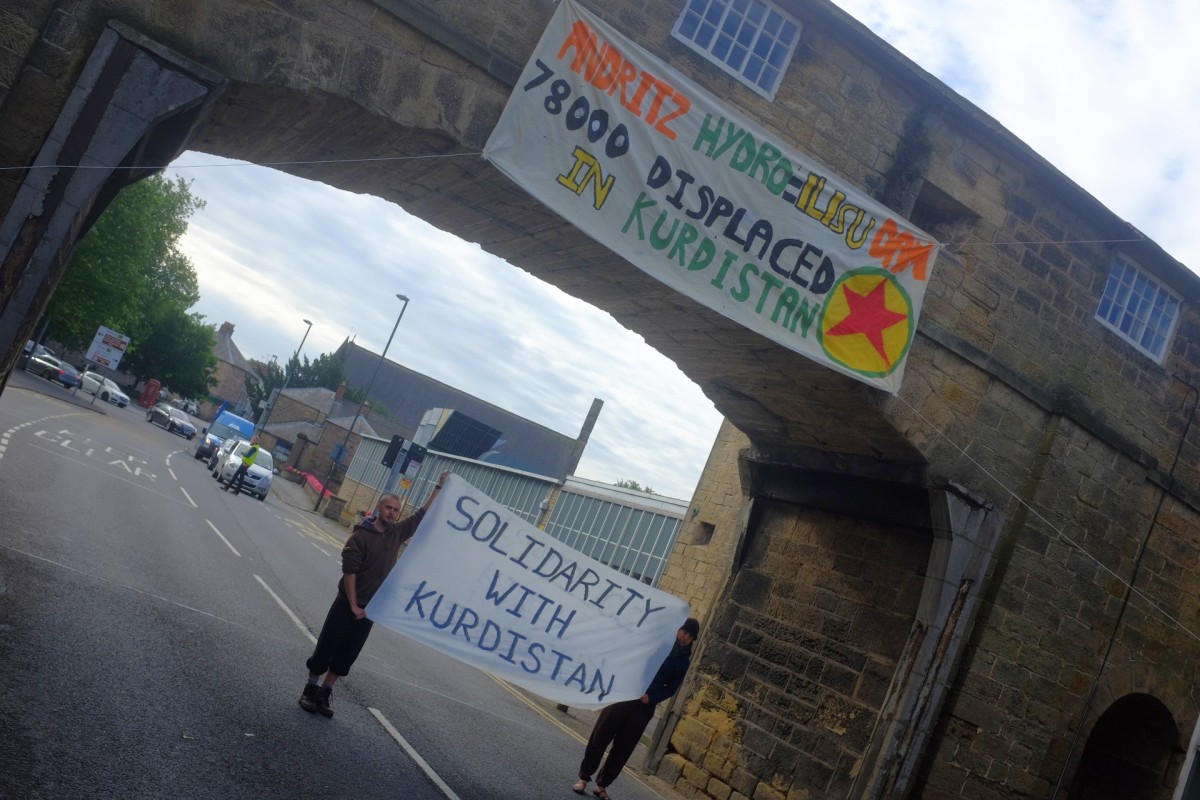 The stunning 12,000 year old town of Hasankeyf, home to thousands of human-made caves, hundreds of medieval monuments and a rich ecosystem, may be one of the oldest continuously inhabited settlements in the world. Hasankeyf is set to vanish forever under a 121 square mile artificial lake if the Ilisu Dam is completed. Turkish and Kurdish campaigners are calling on UNESCO to certify the area a World Heritage Site.

Ironically, the mill that houses Andritz Ltd’s office in Belper where we held our action today is already a UNESCO World Heritage Site. We are anarchists, ecologists and anti-capitalists who have come together today in solidarity with the Kurdish people, and against the environmental devastation of a beautiful and historic place. 78,000 people will lose their homes and 199 villages will be destroyed if the dam is built.

We are calling on people around the world to heed the calls from Kurdistan and renew actions against the Ilisu dam before it is too late. Kurdish friends have called for a global day of action against the dam on September 20th. Read the Kurdish call to action here.

We have seen that people in Kurdistan are currently being attacked by the Turkish state and by ISIS. Kurdish people are resisting these attacks and trying to put their ideas for a new, truly democratic society into practice. The Rojava revolution established a system of direct participative democracy in Rojava, emphasising feminist and ecological values. People in North Kurdistan are trying to do the same, while defending themselves against Turkish military repression. We would like to do what we can to stand in solidarity with these attempts to resist oppression and create a more democratic and free society.

The Ilisu dam is part of the Turkish government’s attacks on Kurdish people aimed at preventing these attempts at autonomy. The region where the Ilisu Dam is being built has a history of violence by the Turkish military. In the 1990s, whole villages were either burnt down by Turkish security forces or forcibly dispelled. Thousands of people were killed or disappeared. By the mid-1990’s more than 3,000 villages had been wiped from the map. The pretext for these actions was to clear PKK guerrillas from the villages. In reality the aim was to expel Kurdish people from their homeland and destroy Kurdish culture and traditions, which have long been illegalised in Turkey. There is a lot of evidence that indicates that the Turkish state is also collaborating with ISIS in its attacks on Kurdish people. Many Kurdish people, journalists and campaigners believe that the bomb blast in the city of Suruç, which killed 32 young socialists and anarchists and the bloody ISIS attack on Kobane, which was launched from within Turkey’s borders, were carried out with Turkish state support. It is more important than ever for people globally to take action in solidarity with Kurdistan. 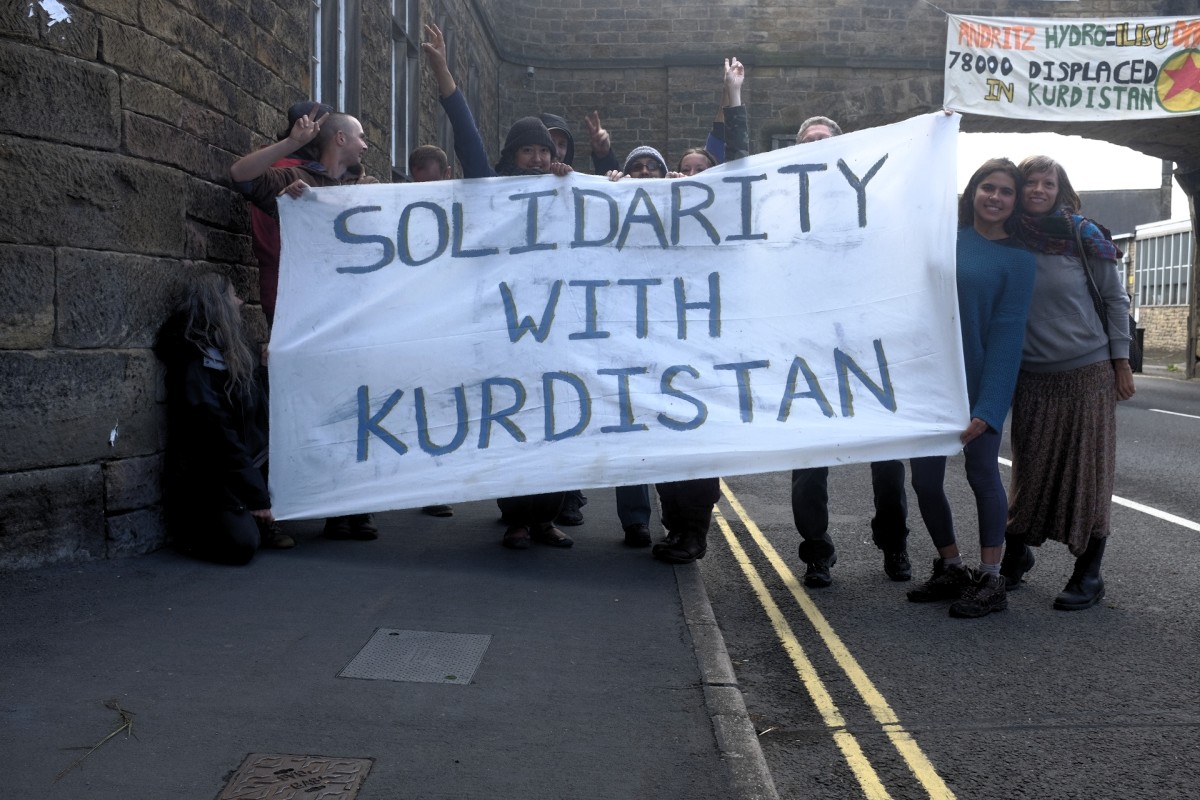 The Ilisu Dam is part of a series of 22 dams that the Turkish state is building in North Kurdistan. The dams form part of the GAP Project. The completed GAP Project will reduce water flow to Syria by 40% and Iraq by 80%.

There has been a long-running campaign against the Ilisu Dam and its construction has previously been halted on several occasions. Officially the Ilisu Dam will provide hydro-electric power, but Kurdish organisations claim that the dam is being built to force Kurdish people out of the rural areas and into the cities.

The Initiative to Keep Hasankeyf Alive (ITKHA) say: “To date, more than half of the GAP has been implemented, but nothing has been improved for the regional people, rather they have had to bear the social andecological costs while the industrial centres in West Turkey and big companies have the profit.”

ITKHA also claim that the dam is being used as a way to gain political power over Iraq: “Almost all of Iraq cities’ drinking water comes from the Tigris and Euphrates rivers… It would be possible for Turkey to cut the water or release too much water. They could even cut the flow of the water for a few months in the summertime. Turkey wants to be aregional power and this dam is a tool to put pressure on Iraq.”