ONE WOMAN’S REVOLT AGAINST THE WALL OF SHAME

The female mayor of Nusaybin, Ayse Gokkan, has started a death fast among the mines between the border of Turkey and Syria. 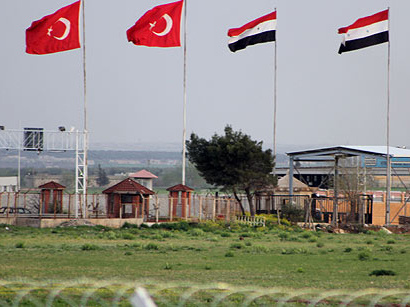 Ayşe Gökkan said: “by building if this wall of shame Turkey is not upholding the Ottowa Agreement which it is a signatory of. The wall is being constructed to maintain the minefield. The building of this wall is a crime. Despite the fact that I am the local mayor, I was not informed of this construction. The decision to build this wall is a political decision. This wall is being constructed to further divide the people of Kurdistan. This wall is not being built for ‘security reasons’ or ‘to prevent trafficking’, it is being built to separate the Kurdish people”.

The KNK statement points out that “if it is not enough for the AKP government to put in place an embargo against the people of Rojava, the building of this wall will further victimise the people of Rojava by cutting off the supply of medicine and humanitarian aid. This is a human rights infringement. This is an open attack against the will of the Kurdish people, who are engaged in a struggle to gain more rights and freedoms”.

The co-chair of the Mardin branch of the BDP Resat Kaymaz said: “our mayor is on a death fast in a minefield. If our mayor loses her life, none other than the Turkish prime minister Erdogan will be responsible. Our mayor’s demands, are the demands of the Kurdish people”. “The building of this wall – says the KNK statement – is a clear indication of the Turkish government’s support for the al-Qaeda linked organisations such as the al-Nusra Front who are continuing their terroristic activities against the Kurdish people”.

The KNK call upon “all international social movements, NGO’s and human rights associations to take a stance against this wall of shame. Only a stance towards this end can help save the life of Nusaybin’s mayor and stop the construction of the wall of shame that is once again aiming to divide the Kurdish people”.