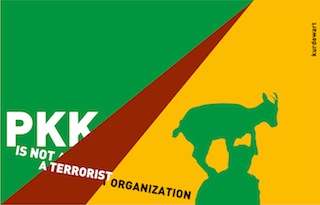 Since the moment when the Kurdistan Workers’ Party (PKK) was formally established on 27 November 1978 there have been enormous transformations in both the organisation itself and in the political struggle of the Kurdish people.

The current situation where the Kurdish issue is increasingly at the forefront of world attention is due in no small part to the consistent activities of the party over the decades and its remarkable ability to react to changing circumstances. In particular, it has demonstrated a formidable ability to mobilise and inspire the Kurds on a mass scale to the extent that it can now count on millions of supporters both in North Kurdistan (Turkey) and in the Kurdish diaspora of Europe and elsewhere.

Over the past year some vitally important developments have taken place within Kurdistan, Turkey and the wider region. The Kurdish struggle has taken on an international dimension on a scale unseen since the Kurds of Iraq were forced out of their lands by Saddam Hussein after the uprising that followed the first Gulf War of the early 1990s. Today the world has looked on in admiration as the Kurds of Kobane have put up an amazing resistance to the murderous onslaught of ISIS (Islamic State).

More widely in the liberated Kurdish lands of Syria known as Rojava the Kurds have attracted considerable public attention because of their experiment in democratic self-government which is almost unique within the Middle East. Since liberating the three cantons of Rojava two years ago the Kurds, led by the Kurdish Democratic Union Party (PYD) and defended by the People’s Protection Units (YPG), have established a democratic system where there is an equal 50/50 representation between men and women in the administration and where all the different ethnic communities are equally involved. This secular, grassroots democracy is now held up as a model for the wider Middle East.

It needs to be stressed that the Rojava model draws heavily in inspiration from the democratic autonomy project that has long been advocated by the PKK and its leader Abdullah Ocalan, who has managed to formulate constructive and innovative ideas for a peaceful political transformation despite his 15 years detention on Imrali Island.

The resistance of the Kurds in Kobane is a direct result of the successes achieved in Rojava of which it forms a part. But Rojava itself is a practical implementation of the modern democratic ideas first formulated in the Imrali jail and widely discussed among the Kurdish movement that draws its inspiration from the PKK. This should not be denied.

The PKK and Ocalan remain ready to play a constructive role as partners in achieving a breakthrough in the peace process with Turkey. As the year approaches its end it appears that constructive steps are being taken despite the frequent negative public pronouncements of Turkey’s leaders who have recently been seeking to portray the PKK on similar terms with ISIS. Fortunately, these assertions are widely regarded as absurd and simply opportunistic because Turkey wants to undermine the Rojava model and weaken the Kurds.

However, Turkey has been losing friends because of its machinations over Kobane and its at best ambiguous position concerning the fight against ISIS.

Earlier in the year Recep Tayyip Erdogan achieved a notable victory in the country’s presidential election and the rule of the AKP looked impregnable. Today, following several outlandish public statements issued by the new president and not least his attitude to Kobane and ISIS, Erdogan looks much more vulnerable. He has alienated several of his key allies and left the country looking quite isolated. Meanwhile, the Kurds have been able to win more supporters by their remarkably courageous stand against ISIS, which is regarded as a serious threat to almost everyone. The role of the YPG in coming to the rescue of the Yezidi refugees in Sinjar has also won the Kurdish cause more friends.

In the light of this year’s remarkable developments, the time is surely opportune for Western governments within the European Union, including the UK, and the United States, to begin a fundamental rethink of their policy concerning the Kurds in order to recognise the Kurdish people’s legitimate rights.

A great step forward to achieving peace would be to remove the PKK from the proscribed list of terrorist organisations to enable it to act as an equal partner with Turkey in any future peace talks. The arguments against doing this convince fewer and fewer people. It must be realised that the PKK is not going to go away; it is time that it was seen as a genuine expression of the will of the Kurdish people for peace and justice. Then a real breakthrough will have been achieved.