In early April 2012, the Peace and Democracy Party (BDP) invited Jeremy Corbyn MP, Lord Hylton and Plaid Cymru MEP Jill Evans to Ankara to meet with Kurdish and Turkish representatives and discuss the current wave of repression against the Kurdish people. 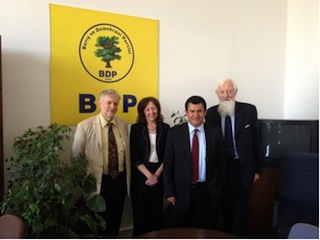 The delegates had a packed schedule in order to gather the broadest opinion on the issues as possible in their short time. In two days, they met with the Turkey Peace Assembly, representatives from the Turkish Human Rights Association and the women’s secretary of the education and teachers’ union, Egitim Sen, as well as with the Vice Chair of the Republican Peoples’ Party (CHP), Mr Sezgin Tanrikulu, and UK Ambassador David Reddaway. They also met with BDP Vice Co-Chair Nazmi Gur, and BDP Deputy Chair, Mr Hasip Kaplan.

The delegation represents the first parliamentary visit from the UK to the Turkish Grand National Assembly.

The delegation report, written jointly on their return to the UK, gives an overview of the delegates’ experiences during the visit, and crucially, gives support to Kurdish demands for full inclusion in the new constitution; advocates the resumption of peace talks with leaders in the PKK; and reaffirms the need for far greater awareness amongst the international community regarding the Kurdish conflict and Turkey’s human rights record.