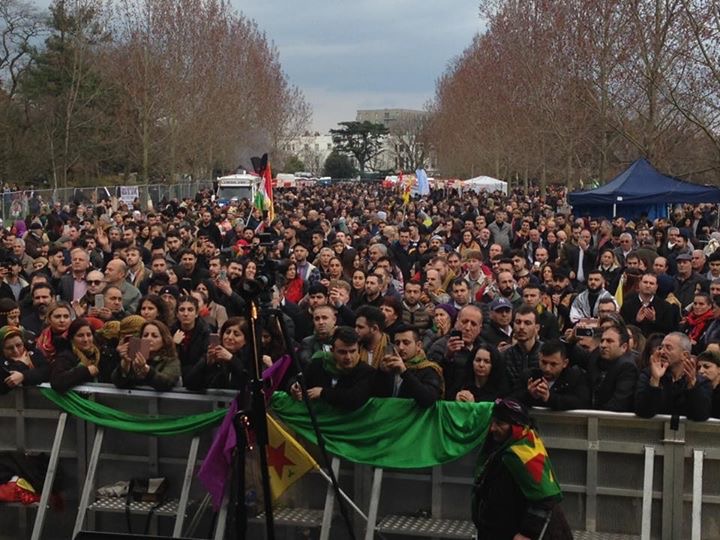 Despite all the horror of the events of Afrin this weekend the Kurds  renewed their determination  to mark this unique occasion, giving collective public expression to their heritage and culture. The resistance of the Kurds is the resistance of humanity. Long live the grass root democracy of Rojava and the democratic confederal model!The afternoon was filled with music and dancing and many friends and activists gave speeches through the afternoon including Doug Nicolls, General Secretary of the GFTU, Steve Sweeney, journalist, Joe Ryan, Chair of Westminster Justice and Peace Commission, Prof Mary Davis, Patron of Peace in Kurdistan Campaign and a representative from the Indian Workers Association (see full speech here) and Trevor Rayne who said:

On 18 March Turkish President Erdogan said Turkey had taken control of Afrin. Turkey is armed by Britain. 30 years ago, on 16 March 1988, Saddam Hussein gassed to death 5,000 Kurds in Halabja. British companies sold Saddam the ingredients for the gas. When is this atrocity going to end? We must organise. We must educate.

People in Britain owe the Kurds a particular responsibility. The British state carved up the Kurdish people’s land at the Treaty of Lausanne in 1923. Today, the Kurdish struggle for self-determination takes place at a critical juncture in the world; critical geographically, critical historically. You must win for the sake of all humanity. We salute Mehmet Aksoy, we salute Anna Campbell. We salute all the martyrs who have died fighting for humanity.

Let Erdogan and the Turkish state remember the words of Ho Chi Minh, spoken in 1951, 25 years before the Vietnamese people defeated imperialism. Ho Chi Minh said: ‘Today it is a case of the grasshopper pitted against the elephant. But tomorrow the elephant will have its guts ripped out.’ Yesterday Vietnam, today Kurdistan.

After Kobane we said the Kurdish people had achieved a pinnacle of resistance for humanity and that new peaks will arise. Afrin will be free! Free Abdullah Ocalan! Biji Apo! Biji Kurdistan! Long live international solidarity!

Absent friends sent messages of support including the following:

*​​Dear Friends,I am so sorry not to be with you today, but I am observing elections in Sierra Leone where we hope to have a peaceful and credible election.I have been told by many people there that they want their country to move further away from war and to democracy.This is a desire that I know you share but we are seeing the opposite happening in too many places, including  the tragedy of Afrin. The Greens have condemned those attacks and the devastating consequences for those who fought for freedom against Da’esh and then fell victim to Erdogan’s hardline position against the rights of the Kurdish people. We have to stand with those who support democracy, the rights of women and minorities and the protection of our planet, so we can have a better future for all of us.I know the Kurdish people are strong and determined to have that better future. I stand with you in that desire.Happy Newroz.*

Socialist Resistance is sorry we are unable to send anyone to speak at this important demonstration today as part of world Afrin day – after the barbarity we have seen in that city these last weeks by the Turkish state.

We note the tragic death of Anna Campbell who went to Afrin because of her conviction that this was the best way to support the struggle for women’s liberation. We salute the way her family have defended her decision to go to fight, while both disagreeing with it and being wracked with grief. We support the demand to bring her body home

We note that on international Women’s Day (March 8), Kurdish women launched a call for a global women’s movement, to “turn the 21st century into an era of women’s freedom”. Women across the world have looked and continue to look to Rojava as a standard bearer in the fight for women’s liberation.

This, as well as attacking democracy and the right of the Kurdish people to self determination is why the Turkish state and their reactionary allies are so determined to destroy Afrin and the beacon of hope that Rojava represents.

At the same time it is not only Kurdish forces and communities under brutal attack. We also completely condemn the massacres that have taken place in Eastern Ghoutta since the beginning of the year and believe that there will be no peace in Syria for any of its peoples while the Assad regime remains in place.

“In the face of this counter-revolutionary consensus,  what is desperately needed is  solidarity between all (Arabs, Kurds and all other ethnic minorities) revolutionaries who are against the Assad regime and all the regional and international imperialist powers and support the struggles for social justice, women’s rights and the rights of oppressed minorities”.

We call on the British government – and indeed all European governments – to lift the ban on the PKK.

I am sorry I can’t be with you today to mark Newroz, a festival of light, the annual renewal of hope and resistance for Kurds everywhere.

This year’s NewRoz is particularly poignant because of recent atrocities in the City of Afrin where innocent civilians and peaceful defenders of democracy have been attacked, maimed and murdered by Turkish state actors. The tearing down of the statue of Kawa – the heroic blacksmith who defeated a brutal ruler – is both an act of cultural vandalism and a blatant provocation by the Turkish forces and their allies.

I want to pay particular respect to those brave heroes who have fallen in the struggle including Anna Campbell who understood that there can be a better fairer world. She was a shining star and we will not forget her.