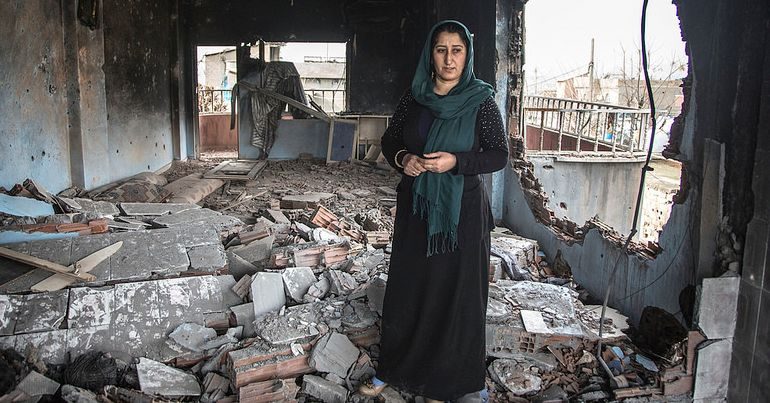 A tribunal has found Turkey guilty of war crimes against Kurds.

During the tribunal session on 15 and 16 March, attended by The Canary, judges of the Permanent Peoples’ Tribunal (PPT) listened to eyewitnesses and experts on Turkey’s treatment of Kurdish people both at home and abroad.

We heard harrowing and damning evidence of how the Turkish state has:

The judgment seems to back up the claims of thousands [pdf, p7] of Kurds who have lost family members and the hundreds of thousands of people who have been displaced as a result of the actions of the Turkish state, to which the UK continues to sell arms.

The preliminary decision also serves as a warning to Turkey: the world is watching.

The tribunal focused on the actions of the Turkish state in the predominantly Kurdish south-east of Turkey following the collapse of peace talks with the Kurdistan Workers’ Party (PKK) in 2015.

On the first day of the tribunal, we heard from witnesses who had watched in fear as Turkish tanks paraded through Kurdish cities. The soldiers apparently chanted Turkish nationalist songs, before shooting at civilians and bombing the basements in which they had desperately sought refuge.

The prosecution showed us videos of the scenes after such bombings in the city of Cizre (see The Canary‘s in depth report at the time). A group of civilians pick their way through the rubble: “what kind of pillage is this?”, cries one old woman. Someone else stops to peer closer at some charred bones:

The Turkish state allegedly committed these atrocities in the cities which President Recep Tayyip Erdoğan’s government had placed under “curfew” after Kurdish leaders had declared the cities to be under “self-administration”.

But this was not a curfew, Italian eyewitness Ezio Menzione told us, “this was a siege”. The Turkish authorities blocked water, electricity and medical services.

they will pay a legal price and the other kind of price.

Faysal Sarıyıldız, a former deputy of the pro-Kurdish opposition party HDP, was in Cizre at the time of the siege. He wanted to be with the people who had elected him.

He told the tribunal how he and some colleagues had tried to recover some bodies on the street and tend to the wounded. The bodies would otherwise rot in the open because Turkish forces were blocking ambulances from accessing these areas.

We were then shown a video clip of this retrieval attempt. Sarıyıldız’s group walks along the street with the bodies, carrying a white flag. We then hear gunshots. The group starts to run, but two people fall to the ground.

The camera phone seems to be on its side on the ground, but it is still filming and we can hear moaning. We see a body on the ground, a pool of blood seeping out from underneath.

Two people died in this incident, shot at from an armoured vehicle.

Student Fatma Demir had travelled to Cizre to show her solidarity with the besieged residents. She ended up in one of the basements in which civilians were hiding from the barrage of heavy artillery. Fatma spoke to the tribunal over Skype.

The Turkish authorities knew the location of these basements, she told us; but instead of protecting the civilians, they seemed to target them. Fatma described how soldiers had thrown bottles of gasoline, with the lids off, into their refuge. The bottles then caught on fire and “set fire to people alive”.

Fatma remembered one 13-year-old girl calling out “Mum, come and help us, because if you don’t they will kill me too”, and a father crying “I don’t want to die, I want to see my child”.

Heavy artillery destroyed at least three such basements in Cizre, including the one in which Fatma had hid, killing around 140 men, women and children.

Fatma says she only survived by hiding in a pile of rubbish for ten days.

In the 7,000-year-old city of Diyarbakır, however, there was an added dimension: the forced displacement of the population and the destruction of buildings of cultural, historical and religious significance.

The old city inside the walls, Sur, is a designated UNESCO World Heritage site.

We heard from Ercan Ayboğa, a former employee of the Diyarbakır Metropolitan Municipality and heritage site coordinator. Ayboğa told the tribunal that the Turkish state has now seized 100% of the land in Sur, and has demolished half the old city, displacing hundreds of thousands of residents.

The prosecution showed us UN satellite photos of this devastation. Not even the rubble remains.

We also saw photos of irreparable damage to the 16th-century Kurşunlu Mosque and the near complete destruction of the Armenian Catholic Church.

Nevin Soyukaya, the former head of the UNESCO World Heritage Site, said this was “systematic demolition and annihilation”.

According to the lawyers for the prosecution, the Turkish government carefully planned this carnage.

The lawyers referred to a leaked plan formed at the Turkish National Security Council meeting of 30 October 2014. Known as the “Collapse Plan”, the government apparently strategised to break Kurdish communities in Turkey after the famous Kurdish successes against Daesh in Iraq and in the largely Kurdish areas of Rojava in northern Syria:

The areas of settlements on which a blockade [curfews] will be applied will have to be destroyed, the possibilities of re-populations will be suppressed. Settlement areas will be pacified through mass destruction, arrests and massive evacuations.

On the second day of the tribunal, we heard how Turkey has also systematically targeted Kurdish civilians and leaders through criminal activity both in Turkey and abroad.

The most notorious of such suspected operations is the assassination in Paris of three high-profile female Kurdish leaders. On 9 January 2013, Sakine Cansız, Fidan Doğan and Leyla Şaylemez were shot near the Gare du Nord. This was just a short walk from where we were sitting for the tribunal.

The lawyer for their families, Antoine Comte, told the tribunal that all the signs pointed to the involvement of the Turkish secret services (MİT). The women were killed professionally, each with bullets to the head. Der Spiegel Online has also published evidence of a leaked document and voice-recording pointing to MİT involvment.

We then watched the video “confessions” of two MİT officials, recently captured in Iraqi Kurdistan by the PKK, corroborating these suspicions.

“Fidan was everything Erdoğan hates,” Sylvie Jan – Fidan’s friend and president of the Association France-Kurdistan – told the tribunal:

The prosecution then invited David Phillips, a former senior adviser to the US State Department and the UN, to speak about alleged Turkish support for terrorist groups.

For instance, in the battle for Kobane in Rojava, Turkey allegedly allowed Daesh and other fundamentalist jihadist fighters access to the fighting. Turkey also supposedly resupplied the jihadists with trains full of ammunition, while blocking Kurdish support for the resistance.

Phillips concluded that Turkey’s support of these groups makes the state complicit in their crimes of terror.

In his closing remarks, the lawyer for the prosecution – Jan Fermon – told the tribunal that there is a:

total war led by the Turkish state, not only against the PKK but against the Kurdish people.

He went on to describe the Turkish state as a “criminal organisation” waging a “psychological war” against Kurds. And in the context of the current Turkish invasion of Afrin in northern Syria, he warned that:

what happened between 2015-2017 will happen again, and it is happening in Afrin.

At the conclusion of the two-day session, tribunal president Philippe Texier announced the judges’ preliminary decision. He said:

The Turkish state is accountable for war crimes, not only in Turkey but also abroad.

Texier then thanked the Kurdish people for its “long history of resistance, courage, and struggle”. And the room erupted with applause.

The tribunal will announce the full decision to the European parliament in Brussels at the end of May.

On 18 March, two days after the tribunal ended, Turkey announced that its troops had taken total control of Afrin’s city centre. Turkish forces have been accused of “massacres”, of “ethnic cleansing”, and have already begun tearing down Kurdish cultural monuments.

But for those who attended the tribunal, there was not only a sense of anger. There was also a deep release – the relief of an injustice acknowledged.