We arrived in Diyarbakir in the late hours of Friday 30th October. There was an uncomfortable quiet in much of the city, several streets lined up by armored vehicles.

Whilst the previous election campaign was conducted amidst a festival feeling, the November 1 snap election lacked any normal signs of rallies or expected election campaigns. (The only thing that resembled a campaign event that we witnessed the entire time we were there was a group of chanting AKP supporters who marched down the street of Siirt, the night before the election, followed by a tank.)

That evening we met with other observers from the UK, as well as members of the Swiss and Austrian teams. Some of stayed in Diyarbakir; another team set off for Siirt by car by the next morning, stopping briefly at Silvan, a municipality that had recently declared self-rule. The HDP office there was bustling with activity, and we were greeted warmly (with endless portions of tea), and given some background on the local situation. By mid-afternoon we had arrived in Siirt itself, where we met at the offices of Elif Akgül Ates, co-vice chair of the Municipal Authority. There we divided into three groups, each being assigned a different town for the next day’s polling observation.

The team sent to Sirvan arrived the next morning around 10am. The town was calm, without a substantial military presence, with the HDP offices a beehive of activity. Endless portions of tea were served. The directors apologized for the run-down condition of the surroundings, explaining that alone among the major political parties, the HDP was systematically denied government campaign funding: since 2002, laws had to be changed on three different occasions in order to disqualify them.

We visited two polling places in the town itself, and four in villages in the countryside around it. The two urban polling stations were calm, with police outside the buildings, and armored vehicles parked in the school playgrounds in one case, but otherwise we were told by the local HDP officials that everything was proceeding normally. We then visited the villages of Hesgo, Orek, Osyak, and [Turkish name] Nallikaya. In each of the first three, members of Village Guards units armed with automatic weapons were positioned ostentatiously outside the polling places. At Hesgo, we asked the armed men stationed at desks by the main door of the school why it was necessary to maintain an armed presence: they replied that there was the danger of clashes between HDP and AKP voters, and that they were instructed to separate and thus protect both sides to any conflict.

While on the road, we received reports from one village where HDP support was particularly strong, that voters were protesting the remov 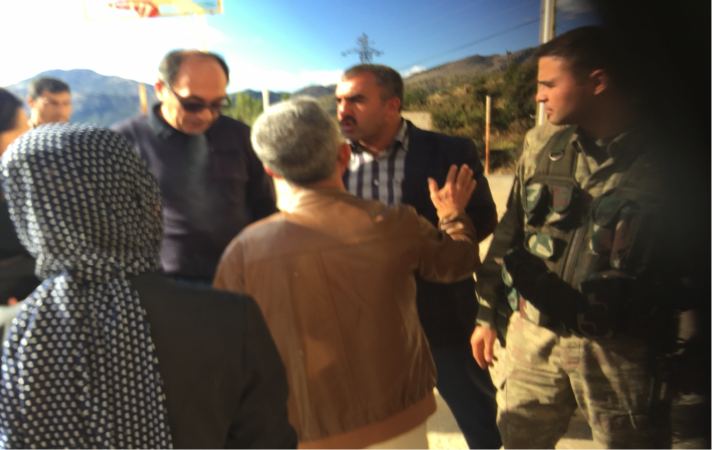 al of their polling station from the school, where it had always been in the past, to a distant health center, making it impossible for them to vote. Reportedly, no votes at all were cast from that particular village.

At the final village on our itinerary, Nallikaya, we found not only Village Guards but armed Gendarmes, positioned inside the building at the door of the polling station. At this station we were at first allowed to observe the voting, but, after a local political representative approached the gendarme commander, were suddenly informed that our observer registration numbers did not match their list, andthat if we did not leave the premises immediately we would be subject to arrest. When the Sirvan HDP co-chair, who was present, asked the commander why he had been positioned inside the building contrary to law, he responded extremely aggressively accused her of lying and stated he had never been inside the building.

The same day, our Diyarbakir team visited the DBP and HDP offices in the city, and met the DBP co-chair Ali Simsek, who gave us some background on the AKP’s military campaign in the city and Kurdish region more generally. We asked him where the other, female co-chair (Hafize Ipek) was, he explained she had been imprisoned for the last three months, accused of giving statements in support of the Kurdish movement. We subsequently met with two MPs for Diyarbakir – Caglar Demirel (HDP) and Ziya Pir (HDP), and Omur Onen and Gulsan Ozer, co-chairs of the HDP’s Diyarbakir Office. They explained the HDP was not able to conduct normal election campaigning as their hands were full supporting the wounded, and families of the killed, from the Ankara bombings. They also expressed concern about the placement of over 5000 “Village Guards” hired through AKP-controlled Ishkur (job centres) in rural communities throughout the province, and also noted the government’s refusal to provide normal campaign funds and the fact that rallies and other campaign events had become impossible for security reasons. Finally, they expressed serious concerns about the Supreme Electoral Board (YSK), who were named the chairs of the various polling committees – while members of NGOs and trade unions had been rejected from such positions, many of those named were local imams who are constitutionally forbidden to take such roles. 1,800 activists, journalists and elected officials, we were told, had been arrested since June, including 40 co-mayors, throughout the whole of the Kurdish regions. 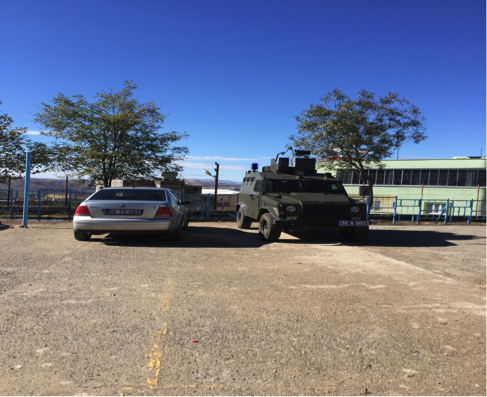 Our team proceeded to Çermik, where we visited six polling places, all located in schools, all surrounded by armed men. The largest was Çermik Anadolu Lisesi, where we encountered numerous police and gendarmes. Inside this particular school, we attempted to question the chair of the polling station, an imam, asking whether his presence was in accord with constitutional principles, the AKP MP candidate Beran Çelik, entered the room with a coterie of supporters, and protested our presence, saying in a very aggressive fashion “our country is a democratic country. We do not want you here.” As the conversation became heated, a crowd gathered behind him, and he insisted that we leave at once. The delegation attempted to de-escalate the situation, explaining that our presence was a normal procedure, but as larger numbers gathered and many began shouting at us, our HDP escort convinced us to 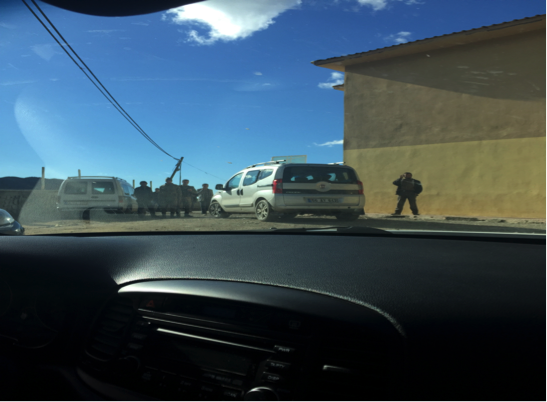 withdraw. (We had just received news that one member of the HDP escort of another delegation had been arrested in a nearby town, and we feared for the safety of our own guides.)

Every school we visited in this region were “protection” by heavily armed government representatives, either soldiers, Village Guards, or both.

We heard numerous stories while we were in the region of various forms of pressure and intimidation wielded by government representatives to influence the vote. These ranged from reports of workers in state institutions or those with large state contracts being informed they would be fired if they did not vote AKP, to polling places being relocated “for security purposes” to inaccessible locations, to stories of Village Guards openly intimidating HDP voters, but being represented in the official press as PKK guerillas intimidating those who wished to vote for the AKP.

According to these accounts, the bias of official institutions in favor of the ruling party was explicit on every level. For instance, in 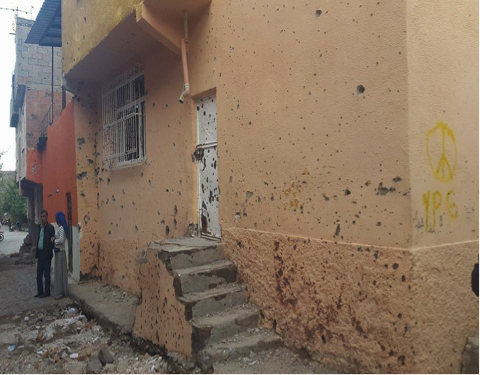 the June elections, the AKP granted itself $330 million for campaign expenses, and all other parties received such funds, except for the HDP, which received nothing. Even the MHP, which had in fact received a smaller share of the vote, was granted $100 million. All institutions were said to show a systematic bias against villages or neighborhoods known to be HDP strongholds: we were even told that municipal authorities would not collect the trash in such areas. One frequently mentioned problem was that the structure of government allowed for Ministerial Offices to override almost any decision made on lower levels, or for that matter, even constitutional principles (such as those banning any military presence in polling places) more or less at will – as a result, even when the HDP received 95% of the vote in certain districts, and all locally elected officials were HDP, ministerial representatives could simply overrule all local decisions rendering such elections effectively meaningless. 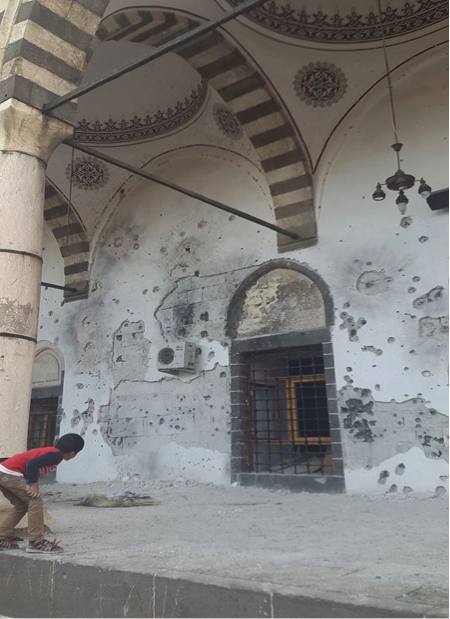 This was one of the main reasons many such communities had made declarations of self-determination, which of course were represented as illegal uprisings by the Turkish state. Such declarations were regularly met with the imposition of curfews and sieges by the Turkish military, often leading to numerous casualties. We witnessed many neighborhoods where walls were pock-marked with bullet holes as a result of such operations.

In conclusion, we were impressed by the determination of so many opposition voters to attend the polls despite what was clearly in many cases the clear intention of the government to discourage them from doing so, using both the implicit threat, and in some cases at least, the explicit use of physical violence.