JOIN THE MARCH FOR LIBERATING LIFE IN IRAN – FREEDOM FOR ALL

March to and Rally at 10 Downing Street 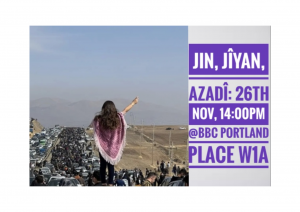 Since mid-September 2022, the citizens of Greater Iran have been in the midst of nation-wide protests, which have rapidly become more of a revolt against the Islamic Regime as protesters begin to gain ground, and in some provinces, the regime has totally retreated.
The protests began in response to the death of Jina Mahsa Amini, who was detained by the morality police for not wearing her headscarf properly; she later died as a consequence of torture in custody. However, since her death, many thousands have disappeared, died, or been detained as the IRGC tried to repress dissent and responded violently towards protesters.

Consequently, the resistance has seen many massacres, including that which was inflicted on the citizens of Zahedan in the provinces of Baluchistan and Sistan. They became subject to a massacre that began on the 30th and is still ongoing; it led to what is now known as “Bloody Friday,” where the regime’s police opened fire on the citizens, leaving the mosques after Friday Prayer. Here, over 300 people have been killed, and many thousands were tortured and detained. Two significant deaths that have really impacted on the community and wider Iran were the deaths of Mona Naqib (age 8), shot on her way to school, and Khodanor Lejei. When he was taken to the hospital, he had been shot in the waist by an IRGC member; they refused to treat him, so the guards tied him to a flagpole and left him to bleed to death; they left a glass of water close enough for him to see but far enough away that it was just out of reach.

Simultaneously, in the Kurdish provinces, the citizens of Oshnavieh, Mahabad, Sanandaj, and Kermanshah, among others, have experienced massacres. In Oshnavieh, the civilians managed to take over the city in the early days of the protests; however, the regime responded by using its air force to target and shoot at civilians. Indeed, a few days ago, the city of Bokan was also taken back by the protesters, and the regime retreated out of the city; however, without international support and recognition, the civilians can hold off the regime for only so long.

However, in a situation as sensitive as that of Iran, it is perhaps prudent to ask, “What is the right support to give?”

Here, we need to explore and understand the socio-politics of Greater Iran; although Iran is undoubtedly an oppressive regime towards all of its citizens, the citizens experience varying degrees of this oppression based on gender, ethnicity, and religion. In March 1979, the regime made it legally binding for women to wear modest clothes and cover their hair in public spaces. While this oppresses all women by denying them choices, it must be noted that in August 1979, the regime also issued a fatwa against the Kurdish population, who have been resisting Iran since the country’s creation as a nation-state and long before. This means that women who are Kurdish experience a greater degree of oppression and discrimination because of the nature of their gender and ethnicity. Furthermore, Iran only recognises Farsi as its national language and prohibits the use of other languages by citizens of different ethnicities; ethnic names that are not Fars or linked to non-Islamic religions are banned, thus oppressing entirely the non-Fars population and leading to racism, discrimination, and segregation. As a result, many media outlets and the Farsi population refer to Jina, as Mahsa.

Here, contradictions begin to emerge, while these protests signify the first time the Fars population has revolted in such vast numbers against the Islamic regime of Iran. It must be taken into consideration that they are revolting against the corruption and gender-based oppression perpetrated by this regime and using Jina as a symbol of this revolt. However, the continued use of her colonial name, Mahsa, suggests that the Fars population is in denial of the racial oppression she and members of her community face. Many do not want to discuss it or notice it because it means acknowledging that, many of these ethnic minorities want to separate from Iran. Or perhaps they are not yet ready to confront themselves and query why they have so often looked the other way as ethnic minorities in Iran faced genocide there are many possible reasons, but this does not redact the fact that members of the non-Fars and non-Islamic community want to be heard, they need to and deserve to be acknowledged.

A 2019 United Nations report showed that, while Kurdish people are a 95% majority in the Kurdish Provinces (Rojhelat), they only make up approximately 10% of Greater Iran’s population. Strikingly, they make up more than 70% of the prison population, and more than half of the political prisoners are Kurds; they are also executed at a disproportionately higher rate. Looking at the experiences of other minorities in the region, although Jina’s death was the catalyst for the many protests in Zahedan, the reality is that only one month before, a 13-year-old girl was raped by the Iranian Regime’s police, and the people were already beginning to revolt. The violations of human rights occur in greater numbers within these communities because they are ethnic minorities and thus do not get heard on an international platform. The regime knows that it is unlikely the international stage will ever hear about a 13-year-old Baluchi girl, particularly if her family cannot even report it.

The reason we are holding this march is two-fold, partly because we want the minorities to see how great they are in number when they are united and to encourage them to raise their voices. The current statistics in Iran look like this:

The other reason is to show the Fars community and the rest of the government, media and other national and international platforms that Iran is pluralistic, there are minorities that need to be heard. Although KJAR is coordinating this march, it is under the umbrella of the ‘Jin, Jiyan, Azadi Collective’ so that it is inclusive of all parties, groups, organisations and individuals who want to participate and support the concept of woman, life, freedom. The slogan has been used widely throughout the protests including amongst the Fars population, with its roots in the Kurdish Womens Freedom movement of Rojava.