Camilla Power is an activist and academic. She has been teaching anthropology for over 20 years at University of East London. With the Radical Anthropology Group, she researches the role of women in human origins, and the evolution of language, art and symbolism. She has done fieldwork on gender and ritual with Hadza women of Tanzania.

With these words, Fawza Yusif, cofounder of the umbrella women’s organization Kongreya Star, launched the founding congress of the Women’s Council of Northern and Eastern Syria (Jun 14 2019). 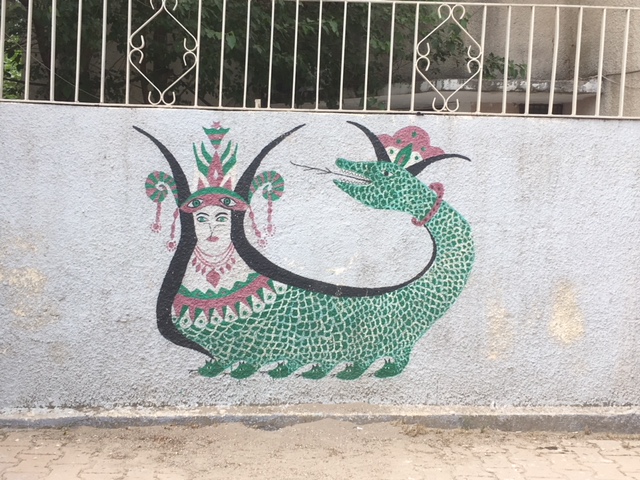 The Painting of Şahmaran outside the Jineology centre in Derik.

Practical evidence for women “making ourselves powerful” and “building a new life” was all around us. As a Perwerde delegation of US and European academics invited by Rojava University, we brought a message of solidarity to this historic congress. It was one of the most multicultural events I have witnessed with translations across four, five or more languages, and representation from multiethnic and multireligious communities, Islamic, Christian and also the preAbrahamic Yezidi. Women wore dazzling celebratory costumes showing off their traditions, alongside the more practical military fatigues of the YPJ (Women’s Protection Units).

The networks of women’s congresses, armed units and community organisations are clearly central to the entire project, from grassroots to the main coordinating bodies of the Autonomous Administration of North and East Syria. Everywhere we went, in meeting educational institutes and organisations, the main topic for discussion and theoretical plank of the revolution was jineology (from the Kurmanji word jin for woman). This idea was coined by Abdullah Öcalan in his prison writings (1), and some feminists have been suspicious of a man advancing the ideas of jineology. But, now being developed by women themselves in so many different contexts, it surely has a creative life of its own. And it is born out of decades of work by women.

We met with university Jineoloji committees, the International Jineoloji research collective, regional Jineoloji centres. The word can express a whole range of meanings from the study or science of women, women’s history and gendered knowledge, to research for women’s support and empowerment, and accountability to women’s perspectives. Women’s equal participation in all aspects of life is the fundamental demand of the revolution.

At Jinwar, the Women’s Village, we engaged in a discussion of jineology as epistemology. Zozan Sima of the Jineoloji Academy argued for a direct relation of revolutionary struggle, as the source experience for jineology, and science. From 2011, jineology had been formalised and built as a science, she said, “a science through the eyes of women”, its method based in experience of struggle, questioning and readdressing society itself through women’s eyes. So it comprises research on the role of women in revolution, with Jinwar, the village built and run by and for women, as a practical example. If we only ask “what is science?”, we lose the questions “why?”, “what for?”. But the highest intellectual endeavour must be to give meaning to life, to interpret life. This is not about science being made servant to ideology, but about fighting for an equal balance of power, removing the vested interests that bias research – the questions that can be asked – under capitalism.

Another example of this science as revolutionary consciousness comes with the work of the International research collective, now known as the Andrea Wolf Institute. In their study groups and courses, they investigate the ways in which women did have and therefore can have power. What was the basis of such ‘matriarchal’ power? What are the particular histories of loss of political, social and economic power with the rise of agriculture and warring states in the Middle East, and elsewhere? One very important area for development of jineology is in relation to human origins. Evolutionary anthropology in the West has taken a strongly feminist turn, with the Grandmother hypothesis and cooperative childcare as central theories. Female agency is nowadays seen as critical to the emergence of language, art and ritual. Women not only maintained equality in early hunter-gatherer communities but our very origins as a species – our bodies and our minds – emerged out of a social and sexual revolution (2).

In a beautiful garden of the Jineoloji research centre in Derik we took the chance to dip our neckerchiefs into a cool fountain under the blistering noonday sun. Here we heard another exposition of the importance of etymology, story and oral history for jineology, forms of transmission of knowledge that are especially women’s domain. The Jineoloji committee prepares research and educational materials, drawing on sources of 5000 years time-depth. They study stories, songs, sayings and literature, paying respect to local ethnicities. When they encounter a source that mentions women, freedom or nature, they study it in depth. Their premise is that ideas about women, culture and ecology are significantly connected.

On the wall outside is a splendid painting of Şahmaran, the Queen of Snakes. Şahmaran is deep-rooted in the folk arts of Anatolia, Kurdistan and Iran. Horned and double-sexed, she has a Queen’s head and a King snake tail, both equally crowned with beautiful red ornaments, while their joint body is made of many, many vivid green scales, and eyes, the feet being several little snakes. This creature embodies female collective intelligence, “herselves” possessing the ultimate treasures of wisdom, able to see into another world. Şahmaran is rightly adopted as emblem of Jinwar and Jineology, of women’s revolutionary science. If we could trace all the roots and branches of oral histories of Şahmaran, we would approach that source of matriarchal power, and begin to understand what occurred with the patriarchal takeover.

So let’s imagine science through the multiple eyes of Şahmaran – an intersubjective science. Intersubjectivity as mutual mindreading is special to humans, emerging early in childhood. As intensely social beings, we are willing to share what we think with each other, and we seek to know what the other thinks of our thoughts. We learn to see ourselves through the eyes of others. This capacity and willingness to mesh our mentality and emotions underlies all human forms of cooperation, shared intentions and goals. Even before language, the aspect of our anatomy that supports this psychology lies in our eyes, which have a unique morphology. We are the only one of over 200 primate species to have evolved eyes with an almond shape and a bright white sclera background to a dark iris. Known as “cooperative eyes”, they invite anyone we interact with to see easily what we are looking at, what we are interested in. So they enable us to correlate our experience: “do you see what I see?”

In his classic work on the human revolution, Blood Relations, Chris Knight claims: “Humans first became scientific – first learned to share their experiential and other findings so as to compare notes and subject them to collective scrutiny and evaluation – thanks to their discovery of what solidarity can mean. Their science, like ours, was essentially their consciousness of their own collective strength.” (3) Inequalities of power and political conflicts obstruct this sharing and therefore distort the objectivity of science. Arguing that jineology roots science into experience of revolutionary struggle simply recognizes that fundamental sexual inequality blocks any possibility of scientific objectivity, until assertion of equal rights and power truly restores intersubjective correlation of experience. Science will then emerge as consciousness of women’s collective power.

The symbol of such consciousness across prestate cultures is an immense, many-headed, many-eyed, all-seeing snake or dragon being, a composite of smaller creatures, with a multitude of senses and perspectives. Paradoxical, cyclical, attuned to cosmic periodicities, often gender ambiguous, these entities express a dialectic of community power – of unity of opposites transcended. Şahmaran is such a being, her/their many human, cooperative eyes reflecting multiplicity and equality of perspective, her/their body a compound core of our shared knowledge.

One delegate raised the question of escaping from the gender binary as an act of personal liberation. The response was sympathetic, but pointed to the needs of the struggle for women’s rights in a very traditional cultural context where forced marriage and honour killing still happen. Above all, there is a need to overcome the view of relations between men and women as only sexual. The YPJ, standing alongside but autonomous from the YPG, provide one model of how this relationship could be redefined, and hence society could be redefined. Currently in Rojava, women need to establish their identity through women’s own councils, congresses, villages etc. As patriarchal power breaks down and women’s – and men’s – free consciousness arises, trans, nonbinary and fluid gender will be expressed as valid experiences. Sacred entities and personages in many prestate societies embody these gender fluid qualities – as indeed does Şahmaran. The science of gender should be a vital part of jineology.

A fully intersubjective, multicultural education was the subject of

a meeting of the Amude Institute which revealed the scale and ambition of the project. This was again a multiethnic group working on producing new curricula for primary and secondary schoolchildren across the Autonomous Administration.

Most colleagues had come through the Damascus system with its policy of Arabic hegemony, leading to discrimination against non-Arab speakers in higher education. As these colleagues introduced themselves and juggled between Kurmanji, Arabic and English in translation, I heard the English phrase “smell of freedom”. The textbooks of the former regime were being binned as “nationalist” and “religionist”. The three red line principles of the new school system were: the rights of women; no “-isms”; and protection of the natural environment.

History colleagues enthused how for the first time Kurds, Arabs, Assyrians, Armenians – representatives of some of the world’s most ancient civilisations –had got together in one room to hammer out teaching of history that was no longer one-sided, the story of the rulers over the ruled, but met the needs of all communities.

How is peaceful coexistence to be achieved in the Middle East, practically? Through learning of each other’s language, avoiding any imposition of language. All children start schooling in their mother tongues. By the third year they start on a neighbour language. Then another. Then they begin to acquire English as a world language.

That’s when the transnational ambition of democratic confederalism really hit me. Just imagine the transformation of community through such lived experience of multiple cultures. Humans evolved to speak each other’s languages. Mutual comprehension implies equality and reciprocity. Monoglottism by contrast is a sign of occupation and colonisation.

The Rojavan revolution is doing this just to survive. While the organisational impetus for democratic confederalism is rooted in specifically Kurdish liberation, it can’t just carry on like that. It has to face the communities that exist on the ground through a long and difficult history. The project is not foundation of some separate Kurdish statelet in the north of Syria. Democratic confederalism with community engagement in politics from the bottom up insists it is transnational and so transplantable to any community in principle. That makes the revolution organically opposed to any capitalist nation state.