International Call for the Freedom of Öcalan

International Call for the Freedom of Öcalan 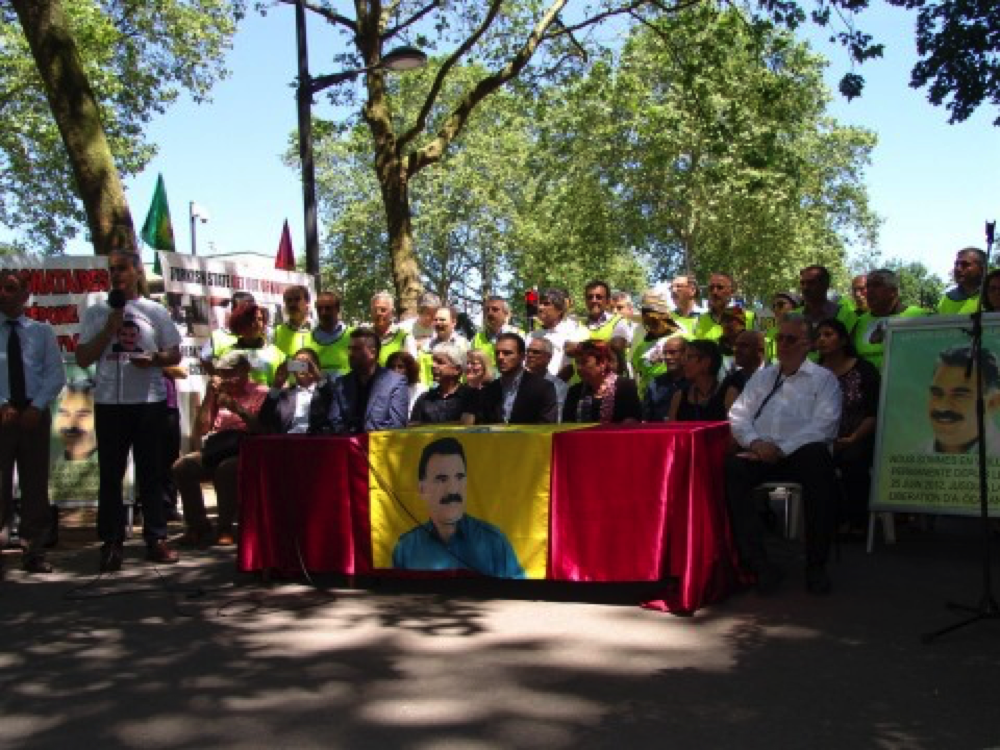 Several European parliamentarians and human rights defenders met in front of the Council of Europe last Friday and issued a call for the freedom of Öcalan.

As the vigil for the freedom of Abdullah Öcalan being in front of the Council of Europe by representatives from institutions in the European Kurdish Democratic Society Congress (KCDK-E) continues, a press conference was held emphasizing the importance of the Öcalan’s freedom for peaceful solutions in Kurdistan and the Middle East.

Kurdish politician Adem Uzun said they wanted to give a message to institutions and all of humanity with the Freedom For Öcalan Vigil, which has continued for four years. Uzun said they are working towards the freedom of all prisoners, as well as Öcalan, and thanked the people carrying out the vigil for four years.

“A DIALOGUE PROCESS SHOULD BE RE-IMPLEMENTED”

European parliamentarians from Parliamentary Assembly of the Council of Europe as well as HDP MPs attended the press conference where Steve Sweeney gave a speech on behalf of trade unionists in Britain. Sweeney said the vigil was on its fourth year but Öcalan has been captive for 17 years. Sweeney reiterated that Öcalan was imprisoned with the aid of international secret services and that his prison conditions did not meet the requirements of international treaties.

Sweeney emphasized that the release of Öcalan would bring Turkey closer to European values and said the dialogue started between Öcalan and the Turkish state made their work easier as well. Sweeney mentioned that this dialogue process had come to a halt and called for it to be reimplemented.

Sweeney pointed out the importance of Öcalan’s ideas on especially women and coexistence with minorities and said Ocalan should be able to play his part.

FLÜCKIGER: ÖCALAN SHOULD BE FREE, PKK SHOULD BE REMOVED FROM THE LIST

In his speech, Swedish human rights defender Martin Flückiger said the hope that arose following the June elections last year was being smothered under pressure and that “There is a great war in Turkey.” Flückiger criticized the European Union for staying silent.

Stating that the EU had “knelt before Erdoğan” following the refugee deal, Flückiger said “EU needs to break this silence at once and oppose Erdoğan’s policies.”

Martin Flückiger also called for an urgent removal of the PKK from the EU list of terrorist organisations and emphasized that the Turkish state and Erdoğan should realize that war is not the answer. Flückiger also said the most important action to take for peace is the freedom of Öcalan.

Parliamentary Assembly of the Council of Europe member Iceland MP Ögmundur Jonasson said they have followed the massacres inflicted on the Kurdish people in recent months and last year, and that their support for the development of peace will continue despite the pressure.

KOX: TURKEY SHOULD STOP THE WAR

Tiny Kox said there will be an effort along with the HDP MPs to reinstate the peace process and added that he hoped the peace efforts would have results and that Öcalan will be released.

VENTURINI: WE ARE WAITING FOR A RESPONSE FROM THE CPT

Italian sociologist and researcher Federico Venturini said, “Today we hear that state violence in Cizre and many other cities has peaked. There are several international reports on the matter.” Venturini also pointed to reemergence of clashes and violence after the Turkish state severed the dialogue process with Kurdish People’s Leader Abdullah Öcalan in April 2015 and criticised the rejection of 600 appeals by Öcalan’s lawyers.

‘HE NEEDS TO BE FREE FOR THE NEGOTIATIONS’

Emphasizing that the important thing is that Öcalan is released for a true peace process, Federico Venturini quoted Nelson Mandela by saying “Only free people can carry out negotiations, not the imprisoned.” Venturini underlined that the PKK had to be involved for the process to carry on.

GROTT: THE STRUGGLE OF THE KURDISH WOMEN IS AN EXAMPLE

PACE’s member from the German Die Linke Annetta Grott said the women would be saying the last word for peace and that “as a feminist, she supports the Kurdish women’s struggle”. Grott saluted the Kurdish women’s success in the implementation of the co-chair system in all aspects including the local administrations and gave the message that they will continue their joint struggle.

Grott added that they still have the hope that the Kurdish people will be successful in their struggle.

“THE VIGIL SHOWED US THERE WAS A PROBLEM”

Amnesty International Sweden representative Maya Heuschmann said the people carrying out the freedom for Öcalan vigil for years gave them the message that “there is a problem and you need to look into this”. Heuschmann said they will continue to defend the rights of the Kurdish people and emphasized that they will support the struggle for the freedom of Öcalan and the rights of the Kurdish people.

KÜRKÇÜ: THE DEMAND FOR ÖCALAN’S FREEDOM SHOULD BE UNDERSTOOD WELL

HDP MP Ertuğrul Kürkçü said the efforts for Öcalan to attend the negotiations as the leader of his people should be understood correctly. Kürkçü emphasized that the problem wasn’t the freedom of one person, that the peace efforts could reach a different level if Öcalan is free.

Stating that there were massacres in Turkey and Kurdistan and that parties in the democratic struggle faced arrests and other pressure, Kürkçü said these efforts and the voice of the opposition was starting to be heard.

Stating that Öcalan is still not free in the fourth year of the vigil, Kürkçü said the struggle for freedom would continue.

HEIDER: COUNCIL OF EUROPE MEMBERS SEE ÖCALAN AS THE REPRESENTATIVE AND THE RESPONDENT

Reimer Heider from the Freedom for Öcalan Initiative said that, despite the isolation, Öcalan is in a different position from that of four years ago and that he is seen as the representative of the Kurdish people and chief negotiator by representatives from all countries in the Council of Europe.

Heider said this had been made possible by the struggle waged by the Kurdish people and underlined that the “Peace for Kurdistan, Freedom for Öcalan” motto of this struggle was the primary “leading force”.

Heider said this effort in Europe will have a great role in Öcalan achieving freedom and Kurdistan achieving peace and he promised continuing support for these efforts.

This is an edited version of a report by ANF