SPEAK UP, the Turkish human rights platform based in Istanbul, Diyarbakır and Eskişehir, have recently released their interview with İlhan Sami Çomak, the Kurdish poet, unjustly imprisoned since 1994 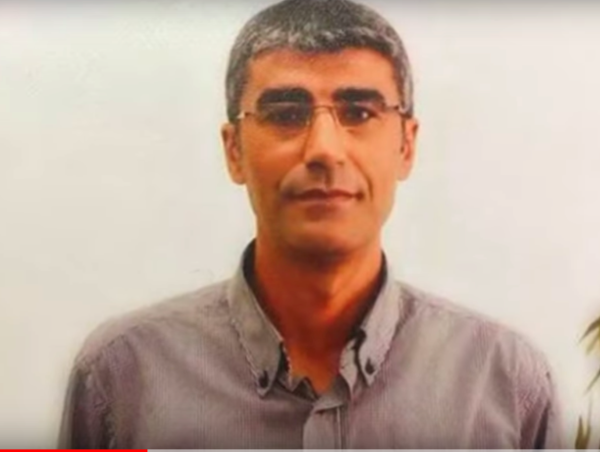 SPEAK UP, the Turkish human rights platform based in Istanbul, Diyarbakır and Eskişehir, have recently released their interview with İlhan Sami Çomak, the Kurdish poet, unjustly imprisoned since 1994.

Çomak, as Estella Schmidt’s poem celebrates is now in his 26th year in a Turkish prison on the simple grounds of being a Kurd (and thereby and allegedly “undertaking separatist activity”) for want of any other believable evidence (on top of torture) as grounds for holding him prisoner.

Despite a long (and ongoing) campaign to have him released and despite the ruling by The European Court of Human Rights in 2007 that Çomak’s prosecution was unlawful İlhan Sami Çomak remains in prison.

Ayşen Güven interviewed the poet for the SPEAK UP platform. He says: “His story, in its entirety, is a long and detailed one. I spoke to İlhan Çomak, the poet, about this “never-ending injustice”, about his poems – which are full of life and hold no bitterness despite his confinement, about prison conditions amidst the ongoing pandemic, his health, and about the justice that cannot come soon enough, thanks to the efforts of legal volunteer, İpek Özel, who has taken his case as a ‘McKenzie friend.’”

Of the situation of JUSTICE IN TURKEY these days, Çomak says:

“…More than 300,000 people are said to be in prisons today, with nearly 70,000 of them being essentially political detainees and convicts. Only last year, the government spokespeople announced the construction of 137 new prisons as if it were an accomplishment. It is said that nearly 400 prisons in Turkey are already full.

We are called political prisoners. Most political offenders are persons who have been deprived of their freedom by dishonest trials because they have voiced their opinions and used their democratic rights to criticize. Unfortunately, this is where things stand in Turkey, as they always have.

Indeed, we did not have a fair trial, we have been imprisoned unfairly, we do not even know why we are here. If we are to take a look at our cases from a legal point of view there is no lawful explanation for why we are here. So, we should not be here under any circumstances, not only during the pandemic, and with the concerns it raises over the transmission. Most of us have been in prison long enough. I am setting aside my own long-gone youth and my entire life; prison is not a place to stay unfairly for even 26 hours – let alone the 26 years I have spent.”

Of the situation of the AKP regime’s “EARLY RELEASE LAW”, Çomak says:

“…the new regulation on the execution of sentences and early release has been in breach of our existing laws. Our constitution stipulates the equality of everyone before the law. Given that fact, the so-called new regulation does not only lag behind this law, but it also constitutes a violation of the existing law, in other words, of the very constitution. As stated by many jurists specialized in enforcement, execution of sentences serves as “rehabilitation” for a person if the said person is guilty. Punishment cannot serve the purpose of taking revenge, inflicting torture in any country governed by the rule of law, including ours. Furthermore, prisons are not and should not be places planned as places of torment. So, these kinds of lifelong punishments, long-term convictions are in breach of humane law. Above all, releasing only some of the convicts based on a newly issued regulation and not allowing the others benefit from this potentially favorable regulation, not doing justice in terms of enforcement is not acceptable, and creates a flagrant double standard, which constitutes discrimination in law.

“…the law on the execution of sentences and early release, which the parliament passed in its current form, has disappointed us for the moment. It looks like with its practices, Turkey has chosen yet again to stand in breach of law. The hopes now lay in the Constitutional Court’s correcting this particular wrong.”

Of the PRISON SYSTEM IN TURKEY, Çomak says:

“Prison is an evil within evils. Indeed, it is a great evil. It clashes against and is in direct contrast with the shortness and preciousness of life. The greatness of the evil comes from that. The feeling of confinement cannot only be explained by being in prison. The sense of confinement goes hand in hand with loneliness and the feeling of being forgotten. The interest the world takes in me, in my poetry, in the struggle for my freedom is precious, so are the gestures of love, interest and intimacy of the people who do not know me personally, the efforts of poet and artist friends who are trying to lend a voice to my poetry, and the efforts of journalist friends who wrote and let people know about the injustices I suffered. I do not have the words to describe how touched I am by all of these efforts; how precious every single effort is to me. I send greetings to each and every one of them…”

Of the situation of POETRY IN PRISON, Çomak says:

“…Yes, in a way, I have become a poet in prison, but I have always thought about it as follows: the venue or imprisonment is important, surely. But what makes the poet speak is not the walls, rather, the moment when the poetry appears within the poet by developing and growing with its own dynamics represents the unattainable, formless, subtle elusiveness of this entire process. I say this because, yes, a link may be found between my being in prison and being a poet, because I was not a poet prior to my imprisonment, I was young, I was a student, I had just come to a big city from Bingöl, and I did not have time to write poetry, so preoccupied was I with the anxiety of being a student. Indeed, it is also possible to think that I might have become a much better poet if I had not been in prison. Joking aside, what I mean to say is that where the poetry is written can overshadow the poetry itself. Many times I have encountered reviews expressing surprise at how come such poetry can be written from a prison. I have welcomed these with joy as they announce the creativity of the poetry proven under any circumstances. Creativity cracks walls; it penetrates at any cost, renews its determination to flow freely! But what is essential is the poetry itself, not where it is written.

“…As you may be able to tell, prison is not in any way a “poetic” environment that nurtures a person, let alone a poet. So, being a poet in prison requires one, before all else, to persist in making efforts to overcome the conditions one is in. if you are an imprisoned poet, you find yourself having to struggle both in terms of nurturing, taking inspiration, and against this place in which you have been imprisoned, and the confinement of this constricting, talent-, dream- and creativity-obstructing place. In other words, it’s like starting a football match 1-0 down.

“It is not right to seek an absolute parallel between being in a dungeon and the poetry written. It is hard for one to speak of oneself, but I will say it anyway: my poetry derives strength from the weight of words; it is the kind of poetry that flows rapidly, running breathlessly towards life outside. I strive to write a cultivated poetry that is not inclined towards pessimism, glorifying pain, or accentuating suffering. I think in terms of images, and essentially I try to build my poetry on the basis of vision. I write a poetry that wants to hear the sound of life without losing a sense of rhythm.

“I use poetry as a light to help me to see life better. I write with the touching grief of a life passing by with all its joy and pain, beyond this seized state of mine, beyond another life; in a way, I run after all that I have lost with my poetry! From that viewpoint, what I invite to my cell with my poetry is indeed life. I have never self-censored my poetry, neither has my poetry ever been censored; to the contrary, I actually hear that many of the officials here, who are obligated to read my poetry, quite like it.”

Of the situation OF RESPONDING TO INJUSTICE, Çomak says:

“Anger is a very basic and strong feeling in humans. If a person has suffered severe oppression, the resulting anger might be very destructive, growing until it damages the soul and turns into hatred. And, once anger has turned into hatred, it becomes absorbed in itself with a greed that knows no limits, going above and beyond whoever or whatever it was initially directed to, making no distinction as to who is rightful and who is not, what is right or what is wrong, as if it wants to announce its existence by destroying everything in its path. I know from my testimony, that the person who hates is included in the destructive power of their own hatred. Indeed, hatred hits its owner first, missing the intended target in most cases. I have experienced and still am experiencing the deepest, the most severe oppression. Yes, anger has paid me a few visits, but I never let it become a constant feeling. It has been more momentary, functioning as a reflex that alerts me in the face of evil, it has never become permanent, and has definitely not turned into hatred.

“No, I do not feel anger, I hold no resentment, no grudge against anyone. I do not come from such a culture, from a breeding that feeds on hatred, revenge. I am Alawi, I was raised in a family that believed in tolerance, forgiveness, understanding, and love for human beings, and not one that believes in hatred and grudges. However, I want this whole episode, this ceaseless injustice which cost me 26 springs, 26 summers, 26 autumns, and 26 winters and which took over my whole life, to be over already.”

“…Justice will surely be served when I am freed as soon as possible, when I no longer have to sleep in this prison – not even another night – when I get to live a simple life with my loved ones, my family, when I do not spend springs inside, when I can be side by side with the people I love, and when we are given an opportunity and allowed to forget our past suffering.

“I did not do anything to be pardoned for, I am not in prison because I committed a crime. The mere fact that the ECtHR requested a retrial for me shows that my trial, and this punishment to which I was sentenced, was unjust. The fact that I was once again sentenced to life in prison while my innocence was so obvious during my retrial is simply a repetition of the injustice I suffered. So I do not expect a pardon but a remedy of this injustice, this lawlessness I suffered. I expect the Constitutional Court to rule in my favour and an end to this 26-year-long lawlessness. This is the only way justice can be served.”

“… I want this cruelty, this lawlessness to come to an end already.”

Compare the words spoken above (“Creativity cracks walls; it penetrates at any cost, renews its determination to flow freely!”) with the statements of any politician recently, in particular those from the current batch of extremists we are burdened with internationally, and ask yourself where, amid all the smoke and mirrors of our contemporary age… the future of humankind lies…

Image of İlhan Sami Çomak: From https://www.youtube.com/watch?v=GScTqB5HaVg (“fair use”)