advances recorded in the industrial area of the town. Conflict activity decreased after 1100hrs

villages, and OAGs regained control of Yasbseh in the morning. This morning, indirect fire

attacks continued south of Tell Abiad town, mainly in and around Badi and Ein Al-Arus (south

across Quamishli and Al-Malikeyyeh Districts. Following the cross-border exchanged in Al-

Malikeyyeh Sub-District, TAF artillery reinforcement were sent across the border from Hiyaka

In Quamishli city, indirect fire was observed on 4 occasion between onto Qanat Al-Sweis

Malikeyyeh Sub-District, one onto Tal Khatun in Qahtaniya Sub-District and one indirect fire

threating and targeting from the turkish army and the rebels (FSA).

reported by our team. The camp security responded. In the time of writing the tensions are

still ongoing. No casualties reported yet.

The total number of the IDPs from the border strip to the south areas since the beginning of the attack: 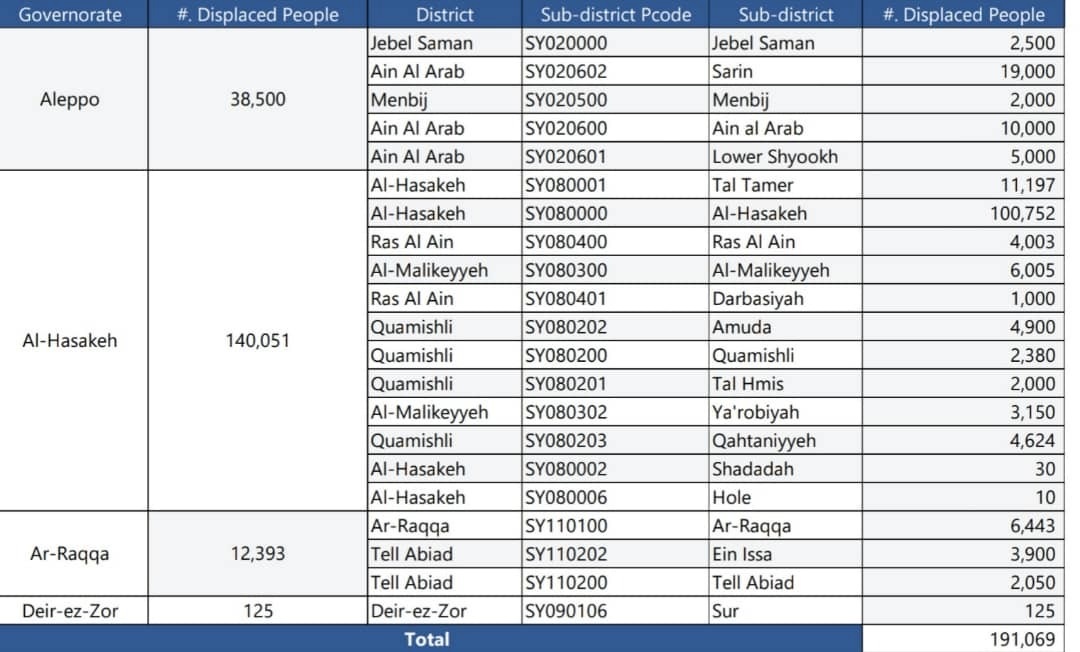 in Alok, which covers more than 500.000 people. This is also affecting all hospitals in this

since this morning TAF has removed parts of the border wall near Tal Halaf, Tal Arqam and Aziziyehvillages (All Ras Al Ain, Serekaniye) and TAF (Turkish Armed Forces) and OAGs have engaged in clashes with SDF during attempts to advances further inside NES.

Clashes were reported in the three locations mentioned above as well as in Ras Al Ain Town, Western Alok, near Jan Tamer (Yezidian village) and Bir Asheq village (also all in Ras Al Ain sub-district). There has been no territorial changes at the time of writing.

In Ein Issa Sub-district, two airstrikes were recorded against a bridge 3km south of Ein Issa town. Cross border fire and clashes taking place in and around Tell Abiad town have stopped at around 0300hrs with no territorial changes.

Heavy clashes were ongoing in Tilebeyd and in the morning while there was a delegation from the tripes going to support SDF from Ein issa to Tilebyed, their convoy was targeted and casualties were reported.

The Kurdish Red Crescent and MSF working in the hospital had then limited access to the area of Tilebeyed, while KRC teams are depending on Trauma stabilization points and ambulances (at least 15 ambulances are involved in the respond so far) while the main hospital to be referred to is still KRC hospital (Shehid Legerin) in Tel Tamr, privat Hasake Hospitals supported by WHO and private Qamishli Hospitals.

Any further event/incidents will be shared in the next update.

Casualties and damages so far:

The 8 years old girl lost her leg, her brother 11 died.

Between last night and this morning, the following developments took place:

The Kurdish Red Crescent has already declared on 9 Oct 2019:

This targeting is affecting the situation in NES for Local and IDPs in the the 7 main camps in NES, we have already declared in KRC that:

Due to the clashes on the border with Turkey and injuries and casualties, we have been required to reposition our medical and ambulance teams from several camps such as Alhol, Areesha, Ain Issa, Roj and other camps. Unfortunately, this situation may cause a decline in the quality of work in these camps, which contain tens of thousands of refugees and displaced people, but the priorities of the stage requires that we respond first to life-threatening situations.

Most of our partners from humanitarian organizations and other INGOs in the region, for security reasons, have limited access to the camps, which threatens to decrease the service and increase the burden on the camp administrations and security forces guarding certain sectors within these camps such as Al Hol. We will work in the Kurdish Red Crescent in our best efforts to arrange our teams to respond to the emergency situation on the border with Turkey and to continue working with the same quality in the camps.

The hospital in Serekaniye (Ras Al-Ain) is out of services, cases has been referred to Tal Tamr Hospital, Hassakeh Hospital and Ein Issa Hospital.

The hospital of Tilabyed (MSF) is out of the service so the cases were moved to other areas such as Einissa, and Tiltemis.

The hospital of Hasake as all Hasake area have lack of water which create problem to respond, The largest Christian Neighborhood (Bisheriya) in NE Syria is being bombed and some civilian