The urgency of the present situation facing the people of Kobane and the longer term implications of the transformation of the Middle East were issues addressed at the public meeting in the House of Lords on 12 January which was jointly organised by Peace in Kurdistan Campaign and Kurdistan National Congress (KNK).

Titled The Collapsed State Systems in Syria & Iraq and the Rise of ISIS & the Kurds, the meeting discussed the Kurdish role in the fight against ISIS and the alternative model offered by the establishment of the self-administration in Rojava.

As host, Lord Hylton stated the Kurds still need all the friends that they can get and this was especially the case in respect of the unrecognised entity of Rojava where urgently needed supplies were only getting through with great difficulty. 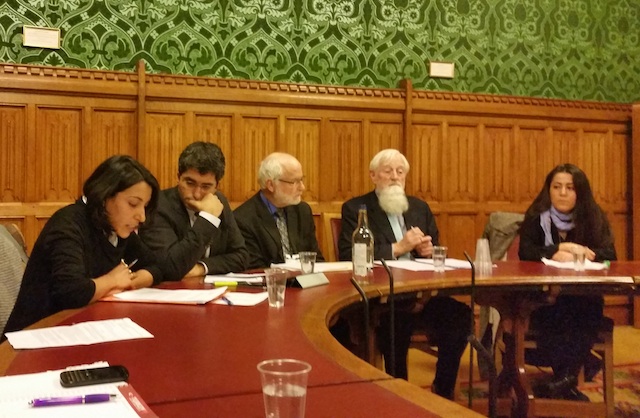 The main speaker was Professor Michael M. Gunter, an expert on the Kurds and the politics of the Middle East, who is the author of a new book, Out of Nowhere: The Kurds in Syria in Peace and War, which is one of the first serious attempts to examine the developments in Rojava.

He argued that the Kurds and ISIS could be defined as “post-state entities” and in their very different ways both are currently playing a role in reshaping the map of the Middle East.

They had both established new “trans-state forms” in the vacuum left by the virtual collapse of the traditional nation states of Syria and Iraq, Professor Gunter said.

He outlined some of the key factors that had led up to the crisis such as the oppressive minority rule of existing states and their failure to provide even the basic level of services for the people.

With regards to the emergence of ISIS, Prof Gunter pointed to the early tacit support of Turkey which had sought to use the militant Islamist group to overthrow Assad in Syria.

Turkey had provided a crucial transit for jihadist traffic from places such as Chechnya to fight in Syria and Iraq.

He remarked that ISIS had managed to attract wide support and had successfully recruited even from non-Sunni populations despite its use of suicide attacks and beheading of victims.

The group’s ideology was bolstered by the Wahhabi interpretation of Islam prevalent in conservative Saudi Arabia.

Prof Gunter saw some differences between the ISIS organisation in Syria and Iraq: in Iraq, it was largely internally based and many leading operatives were former Baathists, whereas in Syria, far more of its recruits were foreign nationals.

He believed that mistaken foreign policies of the US had contributed to the growth of ISIS, including the release of jihadist prisoners held in Iraq.

He explained how the Kurds were now leading the fight against ISIS and that this involved the peshmerga from the Kurdistan Regional Government of Iraq and Kurdish forces from Syria.

The battle for Kobane has been a crucial factor in bringing together the KRG and PYD Kurds in a common cause.

In particular, the PYD and PKK guerrillas had won respect through their efforts in the rescue of the Yezidi Kurds under siege by ISIS. They had “saved the day”, he said.

The ISIS threat had created some strange bedfellows with the US now dropping supplies to Kurds affiliated to the PKK.

In contrast, Turkey has shown reluctance to help relieve Kobane because it saw support for Syrian Kurds as tantamount to supporting the PKK.

It suited Turkish policy to have the Kurds and ISIS engaged in a fight against each other.

However, the crisis had exposed serious strategic differences between Turkey and its US ally.

Furthermore, Prof Gunter pointed out that unlike Turkey, the US does not consider the PYD to be a terrorist organisation and he argued that this was an important factor as it suggests that the US might come to revise its view of the PKK as terrorists.

In conclusion, he argued that the new situation in the Middle East called for a new paradigm to understand the changes that were taking place. Observers had been slow to grasp the major changes taking places in Iraq and Syria which effectively were no longer unitary states.

Professor Gunter’s presentation was followed by two Kurdish speakers who addressed aspects of the current crisis in Rojava and Kobane from different perspectives.

Güney Yildiz, a BBC journalist, argued that the Kurds too often had found themselves facing the wrong enemies and with few friends. The Kurds had fought Iran when the Shah was in power and a staunch ally of the West. Likewise, they had fought in Iraq when Saddam Hussein had for many years been a Western ally.

Syria had also entered into a détente with the West when Assad had first assumed power.

Since the uprising, the Kurds had pursued a “third way” which had put them outside the simple narrative of people in opposition to the oppressive state.

He pointed out that the Kurds had been fighting ISIS for over two years but in Syria they had embarked on a new struggle from 2003 when the Democratic Union Party (PYD) was founded.

He stated that the US had been forced through circumstances to change its approach to the Kurds as they had been shown to be the only effective force standing against ISIS. The success of the people of Kobane presented a huge new opportunity for the Kurds to gain recognition.

The panel of speakers concluded with Aysegul Erdogan, who was representing Roj Women Association. She explained the important role of Kurdish women in Rojava and their resistance to the ISIS attack on Kobane.

The struggle of Kurdish women, however, was not a recent phenomenon but should be traced back to the 1980s.

She paid tribute to the three Kurdish women who were brutally assassination in Paris exactly two years ago and whose assassins had still not been brought to justice.

She explained that developments in Rojava were an outcome of the democratic autonomy project outlined by Abdullah Ocalan who recognised that no society can be run on a democratic basis unless women are allowed full participation.

Aysegul stressed the way that Kurdish women were actively involved in building a new form of social organisation in Rojava and that they had opportunities to take part in decision making as equal partners alongside men.

She said this essentially meant that Kurdish freedom was equal to women’s rights.

By becoming active, Kurdish women were transforming the mentality and culture of the region.

A wide ranging discussion was inspired by the presentations which touched on various issues including progress on women’s rights in the KRG, the influence of foreign intervention in the region and the evolving nature of US relations with the Kurds.

In terms of practical initiatives that could be undertaken in the UK to assist the people of Rojava, Estella Schmid, PIK, suggested that there needed to be more delegations to witness precisely what was being achieved in Rojava despite the ongoing conflict with ISIS. There also must be wider discussions among politicians and policy makers about the issues raised by the speakers.