Further Updates from the Trials of Selahattin Demirtas

Monday 16th AprilMorning in Istanbul starts cold and cloudy. The HDP (Peoples’ Democratic Party) members collect my UK solicitor colleague, Ali Has, and myself at 7 am from our hotel, for the long drive to the Silivri prison complex. On the way we pick up the Assyrian Swedish MP, Yilmaz Kerimo, vice-chair of the Swedish Social Democratic Party, and further along the route we collect one of Demirtas’ top Lawyers, Ramzan Demir.

This time, quite unusually, upon our arrival at the prison complex we find that we are the only international observers here. However we understand that many European observers attempted to attend last week’s Ankara trial where Demirtas appeared in person but were, as expected, refused admission to the court.

To our surprise we are admitted into the courtroom without any fuss, simply having to surrender our passports and cell phones in exchange for an admission tag. This courtroom is, I reckon, as big as a football pitch. As all recording equipment was confiscated from us upon entry, Ali Has drew the courtroom so readers can get an idea for themselves of how vast the environment we were in was. 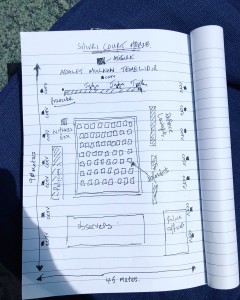 Today though, Demirtas is not in court, neither in the flesh nor on video. The courtroom is practically empty. Nevertheless, we the observers are corralled at the very back end of the courtroom. In front of us stretch yards of empty seats that we could have easily been seated in. From our position we can hardly make out in the far distance the figures of the male judge, his two co-judges and the prosecutor. However, huge TV screens give us a view of the 16 defence lawyers.

When the hearing started, one by one, three of the defence lawyers vehemently challenged the prosecution’s case, which is based on their client’s 2013 Newroz speech. The indictment declares that sections in it represent irrefutable evidence that Demirtas makes, or at least supports, terrorist propaganda. For the next two hours, his lawyers point to several examples of gross misinterpretation and mistranslation of the speech.

For example, the prosecution mistook the acronym HDK as HPG, an arm of the PKK (Kurdish Workers’ Party) who are listed as a terrorist organization. When in fact they meant the HDK (Peoples’ Democratic Congress). The HDK is the umbrella for various diverse CSOs, NGOs, including women’s organisations that undertake many forms of voluntary community work.

The prosecution case, they say, had relied exclusively on a recording of the Newroz speech, but the CD was inaudible in many places due to the position of the camera and audio equipment that had captured it, making it an unreliable source of evidence. The defence argued that the errors are of such magnitude that the court has an obligation to investigate these issues, rather than determine the case on a false basis. It insisted that the court had to show impartial objectivity and they asked for an adjournment so that these complaints could be investigated and analysed by an independent expert.

Sections of a speech by Demirtas co-defendant, the Ankara MP Siri Sureyya Onder, (represented by the same group of Lawyers) “we stand by the peace process and stand shoulder to shoulder with all those who support it” were also cited in the indictment as evidence of terrorist propaganda.

The defence petitioned the Judge to refer this case, on adjournment, to the Constitutional Court to address these irregularities. They also hoped that they would address lifting of the defendants’ parliamentary immunity without due process, and the exploitation of this unconstitutional act to criminalise speeches the defendants made as long as 5 years ago, both outside and inside parliament.

When one defence lawyer declared, with some passion, that none of them would continue with the defence unless these demands were met, the judge furiously denounced him, threatening to report him for “improperly accusing the court of acting unconstitutionally”.

In the end the Court rejected all the applications and adjourned the case for 15 days. It can be heavily theorized that there is a political intent to get a conviction on this indictment as soon as possible and sentence both Demirtas and Onder to long-term imprisonment. Such a conviction would ensure that Demirtas, the ex-leader of the HDP, is permanently barred from political life.

Our group of observers left the court, unsurprised but ever more fearful that justice cannot be won in Turkey’s courts, as President Erdogan’s policies have apparently become even more oppressive. We hope we can encourage more Lawyers to join us on 18th July for the next hearing of the other big Ankara trial of Demirtas. Tomorrow we have a meeting with one of the defence lawyers to hear her comment on the Silivri trial as we await the result of this case.

On our last day here in Istanbul we had two meetings. The first is with Gulistan Kocayigi, the chairperson of the HDK, whose co-chair is in prison. They are awaiting trial under terrorism charges for a press statement made in relation to the occupation of the Kurdish city Afrin in Northern Syria.

Kocayigi herself was briefly detained when her home was raided following her organisation being a signatory to the Academics for Peace petition. She is well aware that such engagements can easily result in arrests and detentions. Kocayigi’s descriptions of the trauma caused to her young sons when armed Police broke her door in ‪at 6 am is an experience shared with so many families as authorities clamp down on all forms of protest and criticism of the Erdogan/AKP (Justice and Development Party) regime. One of the missions the HDK has undertaken is to try and relieve the economic and social suffering of many families whose breadwinners have been put in jail.

Our second meeting was with Zuleyha Gulum, one of the Demirtas lawyers who was present at yesterday’s trial. She described, in great detail, how the AKP has managed to skillfully manipulate the justice system, maximising its complex bureaucracy, so that it gives the outward appearance that all is in accordance with the law: penal, civil and constitutional. The truth however is that the in the present system, where the judges and prosecutors are selected for their allegiance to President Erdogan and the AKP, it seems practically impossible to get any justice.

Gulum gave us the following example; Demirtas and other Kurdish parliamentarians have made speeches and held press conferences in many cities across Turkey. Prosecutions for such statements should be activated in the relevant city. However since it is unlikely that a prison sentence could be achieved on just one speech, the Ministry of Justice has decided to group many of Demirtas speeches together and indict him in the city of Diyarbakir.

This is procedurally wrong and illegal. Demirtas does not live in Diyarbakir, he is not it’s MP, nor were the condemned speeches all made there. The Turkish Ministry of Justice have used the fact that several years back he had been its parliamentary representative in order to prosecute him on a number of speeches. The intent of this is to maximise Demirtas’ sentence and thereby justify detaining him in prison whilst his many trials continue around Turkey.

Demirtas has received 70 separate indictments in trials scattered across the country. He faces huge obstacles: bureaucratic, administrative and political, in trying to defend himself. In this blog post are just some examples of how Turkey’s justice system is apparently being systematically transformed into an authoritarian arm of a police state, whilst preserving all the outward trappings of a civilised administration for the benefit of the outside world.

Myself and the other international observers hope to return ‪on 18th July for the Ankara trial; while on 30th April we will learn the verdict of the Silivri judge at the final hearing and it is said that Demirtas will appear in person to receive it. We fear that all the defence demands will be rejected and expect Demirtas to be given a prison sentence of under 5 years which will ban him from political life. The timing of this last hearing seems especially relevant as on Wednesday President Erdogan announced that early presidential elections will be held on 24th June. In light of this revelation, banning Demirtas from getting involved with politics appears to be the ultimate aim of the prosecution against him.

For this reason the HDP and Demirtas’ lawyers are urgently requesting that everyone concerned about the future of democracy in Turkey come to Istanbul in 2 weeks time observe the announcement of this verdict at the final hearing. I hope that Ali Has and myself will be there.

30 April Hearing of Demirtaş in İstanbul

Images supplied by Margaret Owen and Ali Has