Report of a seminar held at Khalili Lecture Theatre, SOAS, on Saturday 22 November, organised by Roj Women and Peace in Kurdistan Campaign. 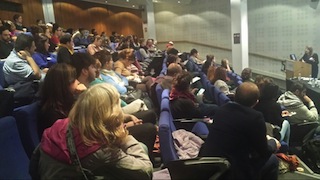 On Saturday 22 November, representatives of several women’s organisations gathered in SOAS University for a seminar to discuss the use of sexualised violence in the recent conflicts in Iraq and Syria. In particular, the event sought to bring attention to the kidnapping of Yezidi women in the Sinjar province by ISIS fighters in August and discuss ways to campaign for their release. The seminar was introduced and chaired Isabel Käser, a PhD candidate, at the Centre for Gender Studies, SOAS, and included members of a newly emerging Women’s Alliance for Kurdistan, Iraq and Syria, a platform of UK based women’s groups who convened following the crisis in Sinjar.

A special recorded message from a refugee camp relief worker in Sinjar was also broadcast during the event to illustrate the people’s urgent need for assistance.

Alexandra Lort Philips, a voluntary worker with Roj Women Association, was a member of a recent delegation that had gone to Kurdistan to explore the issue of gender based violence in Sinjar. The delegation was charged with producing a report into the condition of women and girl refugees being housed in Newroz Camp in Rojava, an independent refugee camp that was until recently functioning entirely without UN or international recognition. The subsequent report was, in this context, an indispensible piece of research given that no other analysis or investigation had been attempted which examined the particular humanitarian needs of refugee women and girls.

Alexandra explained the research survey conducted among refugees aimed to establish their key concerns. Case studies would be produced based on material gathered during the trip. She stressed that the work had been supported by authorities – women’s units and lawyers explained to the researchers what reforms that Rojava had adopted.

She said that violence was not caused simply by the current conflict, but was deep-seated within the society. She was concerned with the most vulnerable groups such as those separated from families and especially women who had been kidnapped by ISIS.

“Honour” was often given as a reason to take flight when the threat from ISIS emerged.

The problem for them on return was that women would face a challenge of questions about their honour – and they would be put at risk by members of their own families. Or at best they would be treated as social outcasts.

She described the YPG’s role in supporting women as the group had strong contacts with women and was in a position to protect them.

Alexandra estimated that about 27 different agencies were working to support women in Rojava.

Ruth Walter, a trade unionist, stated that she had first gone to Kurdistan in 1996 and again in 2000 during Newroz. She also supported the Kurdish communities around Hasankeyf who were fighting the construction of the Ilisu Dam.

She said that her union asked her to go on the latest delegation just two weeks previously. She described the visit as very chaotic because of the current Kobane crisis. She would have liked to have questioned a representative of the Turkish government.

Ruth noted many changes in Diyarbakir since 1996. For example, a new impressive Kurdish cultural centre had been built in the centre of the city; there was much less poverty; and the Kurdish parties were running the local administration. However, the delegation remained under surveillance.

The Kurdish language was now in use which was a big change, she said. People, for example, were now allowed to speak with their doctor in Kurdish.

Despite these changes, rape and violence continued to be widespread against women in detention. The police approach to Kurds was deteriorating amid the Kobane conflict and the situation was going backwards in this respect, Ruth observed. 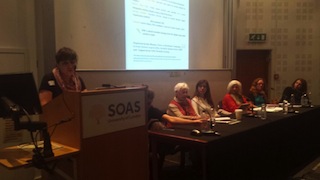 Finally, she stressed the immense pressure on the community and local services arising from the ISIS siege on Kobane. The local hospital simply could not cope. In Turkey, most relief work for refugees was organised by the voluntary sector. Health was a key issue facing refugees but only a minority were sheltered in state run camps where care was available.

Next, barrister Margaret Owen spoke passionately about the current crisis facing women across Kurdistan, Iraq and Syria. She prefaced her remarks by pointing out that she had not been to Rojava as recently as some of the other panellists.

Isis was clearly deliberately targeting women as a matter of policy in order to instil terror in communities. She mentioned the 3,000 Yezidi girls who had gone missing and issued an appeal for urgent action. She made it also clear, however, that ISIS did not represent the only danger to women in the region.

Margaret addressed the legal aspects of the crisis, emphasising that an attack on civilian women was simply a crime against humanity. There must be no impunity for those committing such heinous acts, she declared. But the question remains, how do we bring the perpetrators to justice? Local states were largely silent about this mistreatment of women; they largely see ISIS only as a threat to strategic interests and regional security and do not recognise rape or other sexualised forms of violence against women as war crimes themselves.

She had been lobbying the UK’s William Hague, who had responsibility for a new initiative to prevent violence against women in conflict, to send a scoping mission to Rojava to investigate. The UK will not give aid to the people of Rojava at present and have stated that they do not have mandate to undertake such missions in Syria, but Margaret insisted they needed to alter this view. Finally, she warmly commended Rojava’s progressive social charter on rights as a model for a gender equal society that could have positive repercussions for the region more widely.

Gonar Said spoke about a campaign in the KRG inspired by the example of Rojava. Women in Iraqi Kurdistan were stepping up their demands for a new equality law and making proposals to be adopted by the Kurdish parliament. After 23 years of autonomous rule in Northern Iraq legal reform to achieve greater gender equality had yet to be introduced.

But, she said, the campaign was growing for a change in the law similar to that embodied in the Rojava social charter. It was essential that the KRG adopted such a law because of the massive level of violence against women.

She echoed Margaret Owen by stating that the Rojava social charter was an example for all women in the Middle East.

Michelle Allison, KNK women’s representative, spoke about the role of women in the struggle led by the Kurdistan Workers’ party (PKK) and within the history of the liberation movement. She situated the current struggle in Rojava and Kobane within the context of thousands of years of enslavement of Kurdish and women generally.

She declared that the discrimination and oppression of women did damage to the whole society. The region was a deeply patriarchal society and while women had been playing a central role in the Kurdish struggle since the 1970s they had been engaged in an almost parallel struggle within their own movement in order to achieve equality. This had now been achieved and they had an autonomous status within the organisations of the Kurdish movement. 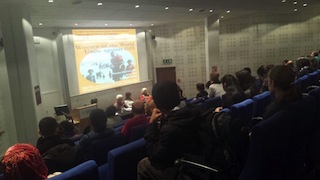 Michelle stated that women’s liberation was key to achieving freedom of society as a whole and the successes within the Kurdish movement were now reflected in the equal representation of men and women within the administrations, such as in Rojava.

She said it was important that women of different generations were engaged in the fight together and stressed that the ultimate aim was to establish an entirely new personality for both men and women.

Diana Nammi, Executive Director, Iranian & Kurdish Women’s Rights Organisation (IKWRO), began her presentation by paying tribute to the resistance of the people of Kobane against ISIS. She said that were defending the right to be human on behalf of everyone and described ISIS as one of the most barbaric groups ever to have been seen in the Mideast. However, she emphasised that they didn’t start the conflict and the US, the European Union and the UK all had to accept their own responsibilities for the deteriorating situation within the region.

She declared that the people in the Mideast demanded and were entitled to exactly the same rights and security as everyone else. The core of the struggle for a better future meant there was a need to campaign against the personal status law within the local states, and that the profoundly damaging cultural issues such as honour and shame needed to change starting with the public mindset prevalent within communities. The concept of honour was used as a tool of war by the likes of ISIS and also entailed endemic social oppression of women. She stressed that more needed to be done to support all the women who had been kidnapped by ISIS.

A discussion covering a broad range of issues followed the main presentations.

The delegates to the seminar were informed that a demonstration calling on women to unite against ISIS had been organised to mark the International day for the Elimination of Violence against Women on 25 November. This was to be held in Trafalgar Square.