Ecological and gender dimensions of the democratic confederalist approach in Northern Syria : an inter-cultural dialogue 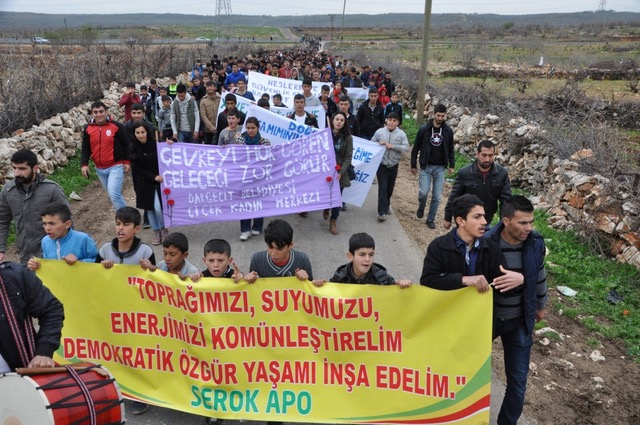 Instead, it is seeking to build a new politics, rooted in what Öcalan has called “democratic confederalism” – the everyday struggle to ensure direct grassroots democracy, to build a needs-based economy that dismantles the oppressions of patriarchy and class and that resets the current exploitative relationship between human and non-human nature.

Öcalan’s vision is being given practical effect in the Democratic Federation of Northern Syria, with considerable progress being made, under a system which accommodates all the ethnic and religious groupings of the area. In Bakur (the Kurdish region of South East Turkey), local municipalities, people’s assemblies and social movements have also declared their intention (despite the oppressions inflicted on them by the Turkish state) to build a democratic ecological society.

Struggles by the Kurdish freedom movement to overcome the exploitation of nature have taken numerous forms – from the two-decade long campaign to prevent the building of the Ilisu and other large dams as well as other destructive investment projects in SE Turkey,  to efforts to prevent deforestation.  But the attention given to ecological justice – the third pillar of democratic confederalism – is not as well developed politically as that given to furthering gender liberation and participatory democracy, the two other pillars.

The seminar will begin with the showing of a 20 minute documentary “Water’s Date of Death” (https://vimeo.com/245478162), which charts the struggle against the Ilisu Dam. Those affected speak about the heritage of the region and what the planned destruction would mean for their culture, their communities and nature. Ecological activists from Iraq, who are concerned about the dam’s downstream impacts on the fragile Iraqi marshlands, also feature.

ERCAN AYABOGA, of the Mesopotamian Ecology Movement, on “Ecology discussions and practices in the Kurdish Freedom Struggle with a focus on North Kurdistan (Bakur)”