I briefly want to inform you that it was Ilhan’s week this week and he received two very important awards.

One is Norwegian Freedom of expression award given by Norwegian Ministry of Culture and Authors Union, which Caroline Stockford Andy I received this afternoon (he shared this prize with Ahmet Altan writer/journalist from Turkey).

And the other is Metin Altıok Poetry prize – Given in the name of late poet Metin Altıok who was murdered in the Sivas massacre in Turkey and who happened to be his teacher when Ilhan was in high school.

Despite all the evil he had to face he really could protect his beautiful soul and didn’t give up at all- on the contrary yes of course he is tired of these very long 28 years of imprisonment but as he always says he is happy seeing that his poetry is slowly proving itself and more his poems now bring him love and genuine friends.

The ceremony for Metin Altıok Prize is on 4th of April. 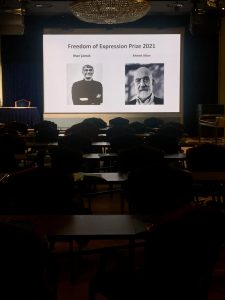 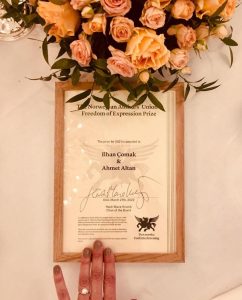