Call for an International Convoy for Kobane

The Kobane Reconstruction Platform has issued a call for a huge international mobilsation for Kobane. With humanitarian aid still urgently need and very little getting through Turkeys’s blockade on Rojava, this action calls on solidarity activists across the world to travel to Suruc, just across the border, to participate in demanding that a humanitarian corridor be opened into Kobane. 15th September will be the anniversary of ISIS’ first attack on Kobane, which led to a four month siege. We join their call and will be working to ensure activists from the UK can join this effort in Suruc. 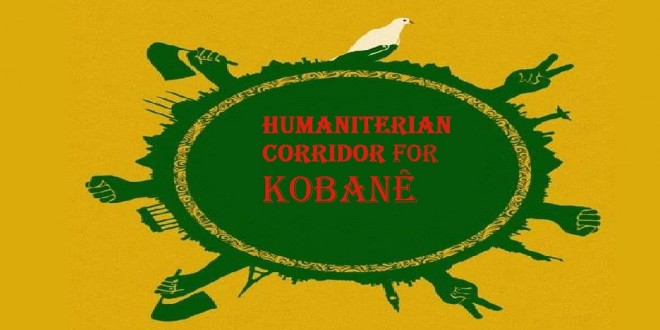 On 15the of September 2014, the Islamic State (ISIS) launched the first large scale attack against the canton of Kobanê in Syria. The Kurdish people living there, led by the People’s Protection Units of (YPG and YPJ) organized a historical war of resistance to defend themselves against the attack. The resistance of the men and women in Kobanê was, and remains, a fight for democracy, human rights, a common future, and equality of women in society.

Kobanê was liberated after 134 days of intense resistance, but the attacks from ISIS continue:
Between 25th and 27th June 2015, ISIS committed another massacre in Kobanê, where more than 200 civilians, most of them women and children, were brutally murdered.

Soon after, on the 20th of July 2015, a suicide bomber exploded in the cultural centre of Amara in Suruç in Turkey. The centre has been an important reference place for international solidarity with Kobanê, with large numbers of activists visiting and congregating there. The blast killed 32 people, and left over a 100 injured among the youth of the Young Socialist Organization, who wished to participate in the reconstruction of Kobanê.

Following this last attack, and while also maintaining a humanitarian blockade on Kobanê, Turkey declared its intention to join the International Coalition against ISIS. Instead, Turkey implemented a policy of ferocious attack on Kurdish positions that belonged to the YPG, the YPJ and the PKK, who have been the only forces effective against ISIS. Simultaneously, Turkey has launched a repressive campaign towards the supporters of the Turkish Left and pro-Kurdish opposition parties such as HDP, DBP and DTK. In the process Turkey has arrested more than 1,300 people, including a number of children.
Nevertheless, the resistance of Rojava continues, and Kobanê needs international support more than ever. Essential services such as water, electricity, food supplies and health care are still lacking or non-existent. It is also crucial that that the thousands of refugees return to their city safely, and support the reconstruction of the city in efforts towards normalisation of life for the traumatised community.

To date, Rojava and the region remain besieged by ISIS. The opening of the border with Turkey is essential in maintain a steady supply of aid and support for traumatised and war torn communities, including hundreds of thousands of refugees who lack access to basic needs and services. The population of Kobanê therefore urgently needs a humanitarian corridor to receive the necessary aid and relief in order to protect, supply and rebuild their city.

Further, after the liberation of Kobanê, anti-Isis Kurdish forces have captured strategic cities like Tal Abyad, Ain Issa, Sarrin, and Hasaka, and continue advancing toward liberating villages of the Raqqa region, the capital of ISIS in Syria. Each of these communities are in desperate need of international aid and services, which only a humanitarian corridor can address. Turkey’s continued prevention in allowing humanitarian aid to cross into Syria is in direct violation of human rights and international law.

The reconstruction of Kobanê, and humanitarian support for Rojava, is essential in cementing the only possible path for democratization of Syria and the entire area. In contrast, the objective of Turkey is to create a buffer zone between the cantons of Kobanê and Afrin, which will facilitate advancement of jihadist and other terrorist forces that endanger hundreds of thousands of innocent civilian lives. This current situation requires an extraordinary mobilization of international solidarity to support the Kurdish people.

Therefore, we invite individual activists, institutions, trade unions, political parties, NGOs, feminist groups, environmentalist groups, youth organisations, concerned citizens, and local and international authorities to participate in a large international caravan to promote peace, by making a public international call for the opening of a humanitarian corridor between Turkey and Syria. The Humanitarian Caravan will urge the UN to assure the opening of another border crossing, based on the implementation of the Resolution 2165 of 14 July 2014, article 2.

Tuesday, the 15th of September 2015, will mark the anniversary of the first ISIS attack on Kobanê. On this date we aim to stand in solidarity with the people of Kobanê and Rojava in the border town of Suruç (Pirsus) between the 15t-17th, to express our political support, and request the entry of a humanitarian convoy to Kobanê as a concrete act of international solidarity.

We hope to see as many international supporters on the 15th in Suruç.