“This was a very well attended and successful fringe meeting and the first one that has been held at the Labour Party. It builds on the great work that UNITE, GMB and other unions have been doing with Peace in Kurdistan to build solidarity with the Kurds in their struggle for democracy, equality and freedom. It also builds on the path-breaking emergency motion that the TUC passed during its September conference in which all UK unions joined the call for the release of Abdullah Ocalan and the restart of the peace process. We intend to hold another fringe at next years party conference and to continue to push the case and spread the message.” Simon Dubbins Director of International for UNITE

The Freedom for Ocalan campaign held a fringe meeting at this year’s conference, co-sponsored by the GMB, UNITE and Peace in Kurdistan campaign. The Union movement has been very supportive of the campaign to free Ocalan, and in this, his 18th year of incarceration, it has passed an emergency resolution calling for, among other things , “the restart of the peace process that was unilaterally terminated by the Turkish government in June 2015, and for the release of imprisoned Kurdish leader Abdullah Ocalan as an essential element for such a process to be successful.”

The meeting entitled, Building solidarity with the Kurdish struggle for democracy, equality and freedom, included a speech by Feleknas Uca, HDP MP for Diyarbakir. Uca is a Yazidi politician active in Germany and Turkey and from 1999 to 2009; she was member of the European Parliament from Germany, serving with Die Linke and was at one time the world’s only Yazidi parliamentarian until the Iraqi legislature was elected in 2005. In June 2015 she was elected as a Member of Parliament in Turkey representing the Peoples Democratic Party (HDP) Diyarbakır. 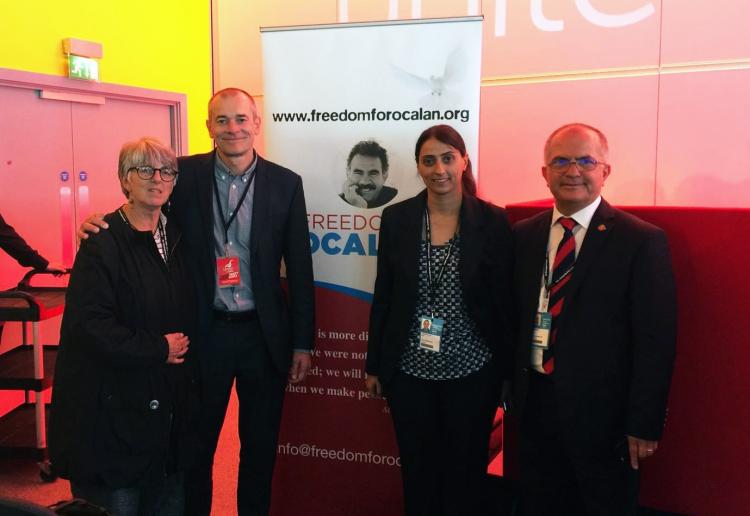 Talking about the suspended peace process and the imprisonment of Ocalan, she told the meeting, “As is well known, the Turkish government suspended the peace process (in effect between 2013 and 2015), of which Mr. Ocalan was the chief architect. He has been kept under conditions of strict isolation; his family members and lawyers have not been allowed to visit him, which is a clear violation of the national and international law. As you also know, the coup attempt in Turkey on 15th July 2016 proved to be unsuccessful, however it has led to the most dangerous situation for democracy in Turkey. President Tayyip Erdogan has declared a state of emergency and gone well beyond arresting the coup plotters, suppressing political organizations, media outlets and imprisoning journalists. In these volatile circumstances, millions of Kurds have grave concerns about the safety and wellbeing of Abdullah Öcalan. This concern was shared by his family, his lawyers, the Kurdish people and the wider public.”

Simon Dubbins, International Officer of UNITE, Julie Ward MEP, Micky Bradley of Sinn Fein and Akif Wan of the Kurdistan National Congress also spoke. They highlighted the need for solidarity with the progressive, secular , democratic Kurdish forces in Syria, and the primacy of freedom for Ocalan, if a meaningful peace process was to be reinstituted in Turkey.