Peace in Kurdistan campaign is delighted to hear the announcement that the case against Adem Uzun, predicated on baseless and conspiratorial charges, has been dropped. Adem had been on remand having been released from prison in Paris, where he had been held since his arrest on 6 October 2012. Peace in Kurdistan campaign would like to thank everyone who became a Friend of Adem Uzun, signed our petition for Adem’s release and sent postcards to the French Justice Minister to demand his freedom. Here is a message Adem wrote to his supporters giving thanks:

In this short letter I would like to extend to you my gratitude for the solidarity you have shown in the attainment of my freedom.

As a combined result of the effective campaigning that you started, the public’s hard work in exposing the conspiracy and our tireless legal struggle, the French Appeals Court has completely disregarded the French and Turkish state’s jointly engineered plot. The court’s decision clearly stated that there was no case to answer, as the methods employed by the French police and its intelligence services were illegal. This decision amounts to an approval by the court of our defence case which we made from the beginning; that this was a conspiracy.

Although this conspiracy was directly carried out against my political activities and my search for a peaceful and democratic solution to the Kurdish question; in essence this was a conspiracy against the Kurdish people and the Kurdish freedom movement. These conspiracies are a direct result of the just struggles of oppressed peoples (the Kurds in this instance) which are to be sacrificed for the joint economic interests of states. However, this time their plot has been foiled. The crucial factor in this success was the solidarity that you showed, your insistence on siding with a just cause and your persistent support for freedom and democracy struggles.

I would like to take this opportunity to state my happiness for once again being free among you and for having the opportunity to work with you; thank you for your solidarity. I would like to reiterate that we will continue to work together for a peaceful and democratic solution to the Kurdish question and remain in solidarity with all democratic struggles across the Middle East and the world.

Last year, Peace in Kurdistan campaign and Campaign Against Criminalising Communities (CAMPACC) began a series of initiatives to pressure the French government to release Adem Uzun, a Kurdish peace activist and member of the Kurdistan National Congress (KNK) who was arrested in October 2012 in Paris. Adem Uzun had been a key negotiator for in the Oslo Peace Talks with high level Turkish government representatives and is well known for his commitment to a negotiated settlement to the Kurdish question in Turkey. 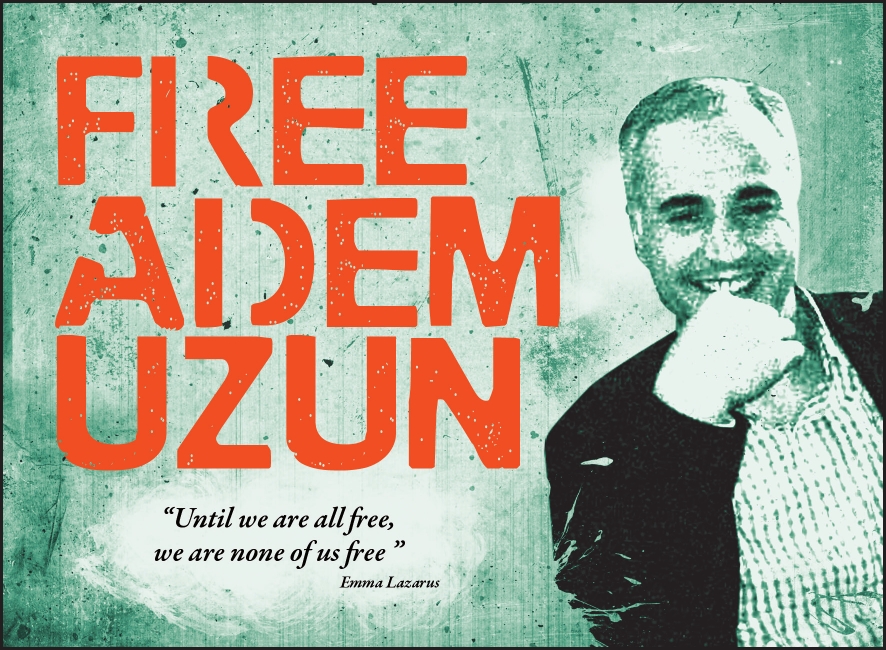 We designed and printed postcards to be sent to the Justice Minister of France, Christiane Taubira, demanding that they FREE ADEM UZUN. The postcard had a short text on the back and we asked people to sign and send them off to her.

We also coordinated the Friends of Adem Uzun Initiative, a coalition of over 200 public figures, lawyers, and politicians with expertise on the Kurdish question in Turkey, as well as community activists, grassroots campaigners, and trade unionists. The Friends was established to support the call for Adem Uzun’s release, and jointly sent an open letter to Christiane Taubira, Justice Minister of France, to urge French authorities to release him.

The Kurdish politician Adem Uzun was arrested in France on 6 October 2012. Having been denied bail, Adem remains in detention awaiting a trial which could be months away.

Adem Uzun is a prominent activist working to achieve peace through the resumption of negotiations between Turkey and the Kurds. A leading politician with the Kurdistan National Congress, KNK, Adem is well-known to anyone involved in the Kurdish issue, especially in the European Parliament, and has been one of the main Kurdish negotiators in the so-called “Oslo Process” with high-level Turkish Government’s representatives.

The charge against Adem Uzun is not supported by credible evidence. At the time of his arrest, Adem Uzun was in Paris to take part in preparations for a conference on Western Kurdistan (Syria), which was scheduled to take place on 13 October 2012.

We believe that the arrest of Adem Uzun, which has been made on Turkey’s request, is an attempt to undermine the search for a peaceful political resolution of the Kurdish question.

The prosecution intends to equate two separate organisations, the KNK with the PKK, in order to de-legitimise political efforts towards resolution of the conflict. This same tactic is today being used by Turkey to repress and silence the non-violent dissent of thousands of Kurdish politicians and activists.

The offence of belonging to a terrorist organisation in France and across the EU, is a highly politicised ‘crime by association’. It criminalises the entire Kurdish political movement by imputing activists to be the PKK, in the clear absence of any engagement in violence.

The EU Turkey Civic Commission (EUTCC) Conference, meeting in Brussels on 5th and 6th December, passed a special resolution calling on the French authorities to immediately release Adem Uzun. ‘’As a leading legitimate politician of the Kurdish political movement Mr. Uzun is well known for his advocacy of a democratic and peaceful solution to the Kurdish problem for which he was chosen to be one of the negotiators in the Oslo Peace Talks,’’ the EUTCC stated. The resolution urged the ‘’expeditious conclusion to his case by dropping the accusations against him’’.

Adem Uzun is fully committed to a peaceful settlement and we are concerned that peace and reconciliation will be much harder to achieve without the expertise of such a seasoned activist.

We strongly reiterate the demand to French authorities for our friend Adem Uzun’s immediate release and for the dropping of the baseless accusations.

We urge everyone who is committed to a peaceful political resolution of the Kurdish conflict to declare themselves friends of Adem Uzun and to add your voice to the calls for his release.